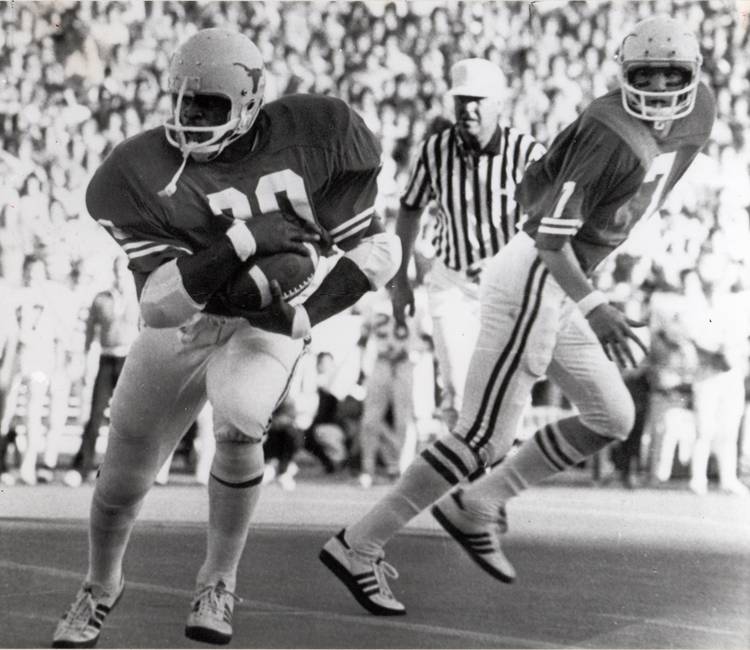 Texas running back Earl Campbell rushed for 1,744 yards en route to winning the Heisman Trophy. He had 181 yards against Baylor on Nov. 19, 1977. (Photo by University of Texas athletics)

Nobody sensed Earl Campbell could win the Heisman Trophy in September 1977. And the biggest story after Texas’ season-opening win over Boston College was something that provided sensory overload.

It’s true. It was all over Royal-Memorial Stadium. School officials had to spend $140 to acquire 200 pounds of dry chlorine powder to eliminate what the American-Statesman called a “sniffer’s delight.”

Those who purchased $8 tickets to attend the Virginia game the following week — yes, tickets were just 8 BUCKS!! — probably enjoyed the clean-up efforts. And they enjoyed watching Campbell rumble for 157 yards, a total that moved him to second place on the school’s all-time rushing list behind Roosevelt Leaks.

Campbell, running sweeps out of the I-formation, piled up 131 yards in the first half of a colossal 72-15 demolition of Rice. The bruising 223-pound runner was an afterthought, though. All the headlines focused on Russell Erxleben’s 67-yard field goal, a school record. Wind conditions were only 10 mph.

Texas was 3-0 going into the Cotton Bowl to face No. 2 Oklahoma. Quarterbacks Mark McBath and Jon Aune both got hurt in the first quarter, and all eyes turned to Randy McEachern, described then as “a hard-luck junior from Pasadena.” His stats weren’t pretty but effective enough. McEachern ran 14 times for 20 yards. He was 4 for 8 passing for 57 yards.

“Earl came out to meet me halfway to the huddle and had to introduce himself,” McEachern said. “He said, ‘You can do it, Keach.’ That was a nice gesture on his part.”

Campbell had 124 yards, but McEachern was the star. He was congratulated by Texas Gov. Dolph Brisco. “One man handed him a Coke,” the Statesman reported. Another man told McEachern he had three girls waiting on him back in Austin. Yes, that tidbit was actually in this newspaper.

Campbell couldn’t be overlooked anymore once Texas knocked off No. 8 Arkansas. He amassed 188 yards, making him the all-time rushing leader in both school and Southwest Conference history.

An appreciative fan approached Campbell afterward and said, “That was great running, Earl.” The slow-talking Tyler native responded, “That’s why they call me a running back.”

Campbell had a personal-record 213 yards against SMU. “Earl’s performance? Just like a Heisman Trophy candidate ought to be,” UT coach Fred Akers said. “And those yards weren’t free. He had to earn them.”

Campbell had 116 yards against Texas Tech, and tonsillitis couldn’t stop him against Houston. Campbell was laid up in bed on Friday, but ran for 173 yards on Saturday, his seventh straight 100-yard game, passing Chris Gilbert’s school record of six. “I was sick. I don’t quit that easily, though. The guys I play won’t let me quit,” Campbell said.

Campbell always praised his offensive linemen. But they knew how to motivate him, too. Against TCU, he had some short gains. “When I came back to the huddle, Rick Ingraham, our left guard, says, ‘Heisman, my ass.’”

Campbell’s 181 yards against Baylor broke Leaks’ single-season UT rushing record. And he scored his 15th touchdown of the season, setting another UT mark.

“Some day someone will come along and break them,” Campbell said. “I didn’t do that by myself. … Say ‘we’ broke the touchdown record.”

After the Baylor game, Ingraham said, “A better player hasn’t been born yet.”

The best part of the regular-season finale against Texas A&M wasn’t Campbell’s 222 yards. It was his 60-yard touchdown catch. Either that, or Campbell doing a midfield funky chicken dance afterward at Kyle Field.

By that point, Campbell had 1,744 yards, an astonishing 1,054 coming after first contact. He was an easy choice on Heisman ballots, getting 371 first-place votes. Oklahoma State’s Terry Miller and Notre Dame’s Ken MacAfee finished second and third, respectively.

Campbell finished one of the best seasons in Texas history with 116 yards in a 38-10 loss to Notre Dame. At that time, bowl statistics did not count toward a player’s individual total. But Campbell’s final tally in 1977 was unmistakable — he had 11 consecutive 100-yard games, still one of the longest standing records in UT’s history book.

It’s taken 39 years for another Longhorn to come close to matching that accomplishment.

D’Onta Foreman has 10 consecutive 100-yard performances in a string dating back to last season. It’s the longest active streak in the country. In his last 10 games, Foreman has 1,750 yards and 16 touchdowns. He’s averaging 7.4 yards per carry.

On social media, the hashtag #HEISforeMAN is starting to gain traction.

Campbell’s story is inspirational. His father died when he was in the fourth grade. At the Heisman ceremony, Earl’s mother Ann Campbell said, “I have 11 kids and can’t afford to get too nervous.”

No need for Foreman to be nervous now, either.

“No matter what happens tonight, I know there will be a tomorrow,” Campbell said in room on the 46th floor of a midtown Manhattan hotel in December 1977. “I feel great. I’m relaxed. Like everyone else, I’m going to see what is going to happen. I hope things go my way.”