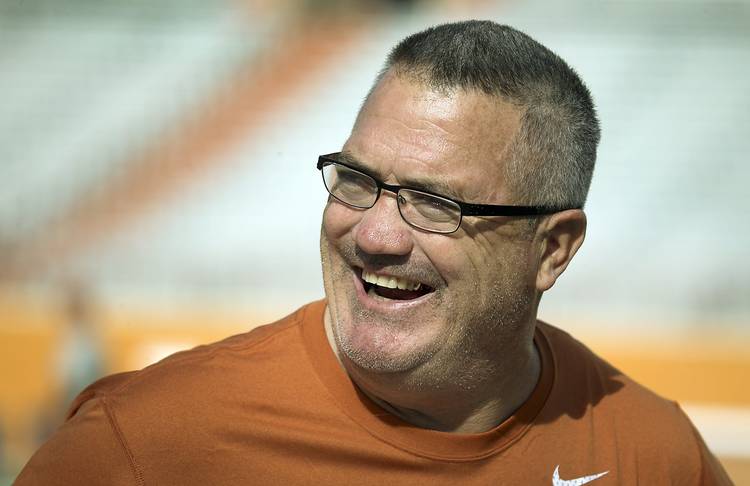 Almost a year after he left Texas, Joe Wickline will be back at Royal-Memorial Stadium on Saturday as offensive coordinator.

And like the two combustible seasons he spent with the Longhorns, he won’t be calling plays now either. At least, not many of them.

Following two very turbulent years in Austin when he found himself embroiled in a swirl of controversy over a prolonged lawsuit with his former employer Oklahoma State, contentious relationships within Charlie Strong’s coaching staff and a fractured offense that lacked a consistent, reliable quarterback, Wickline is happy to have found peace and contentment in the hills of West Virginia.

He lost his job here, but none of his acerbic sense of humor.

He began a phone conversation this week about returning to Texas as part of the enemy by saying, “We’ll see if we can get enough volunteers to come on the plane and take the field.”

Betting on the presumption that he and head coach Dana Holgorsen can fill out a squad against resurgent Texas, they’ll show up with the surprise team of the Big 12, a 7-1 club that probably plays defense better than anyone in the league and features an outstanding quarterback in Skyler Howard as part of a very balanced offense. And a very good coach in Wickline.

Wickline was more than a little familiar with West Virginia’s potent offense before he arrived there in January. Texas lost up there last November.

“Oh yeah,” he joked about that five-turnover game and 38-20 loss to the Mountaineers, “we had a lot of fun up there.”

Grins were few and far between in his time with the Longhorns that ended with his firing by Strong.

“Few people will believe this, but the ones who know me will know I only consider this the next game,” Wickline said. “It’s not about me. It’s about the West Virginia Mountaineers, our gameplan, our players. Charlie had to make a decision and go in the direction of what’s best for the University of Texas. I don’t hold grudges or hate or judging. I don’t have time for that.”

He says he’ll ponder that when he retires, which won’t be any time soon. He’s only 58. So how long does he plan to coach?

“At least until I’m 100,” he cracked. “I may quit after that. Or I’ll probably volunteer at a junior high and ease on down there in a wheelchair.”

In the meantime, this old-school offensive line coach who’s been one of the best in college football is coaching up the Mountaineers’ tight ends and fullbacks and working up the weekly gameplan. Yes, as offensive coordinator.

He’d prefer not to discuss that lawsuit filed by Oklahoma State alleging that Wickline had to call Longhorns plays to justify leaving the Cowboys for what they thought was a lateral move. It was resolved in OSU’s favor, and Wickline was on the hook for a negotiated-down $250,000 even though it says here Texas should have paid it off to make it go away and flush that lingering storyline. Asked if he had to shell it out of his own pocket, Wickline sighed and said, “Yeah.” But he added, “It will get worked out.”

Strong contended the lawsuit was hardly to blame for Texas’ seasons.

“Joe’s an outstanding coach,” Strong said Monday. “The lawsuit wasn’t a big distraction for me. It was more for him. He’s done a really good job where he is now, and (we know) how well the offensive line is playing for him.”

Much has changed since Wickline strolled the sidelines as Strong’s co-offensive coordinator beside Shawn Watson. For one, his replacement, Sterlin Gilbert, has been more than capable. These Longhorns now pass better (went from 118th nationally to 41st), run better (225 yards a game to 247) and score more (83rd to 27th).

While it was never completely clear who called the plays when Wickline was here — everyone assumed Watson had those duties — it’s obvious Gilbert runs the offense now and has done well when he’s not deciding between using a backup quarterback or the best running back in the nation for a crucial yard or two.

As for Wickline, he’s co-existing just fine with Holgorsen, whose paths overlapped at Stillwater for a year when the latter was Mike Gundy’s offensive coordinator. The two had never met before then.

“Our differences made it good,” Wickline said. “I think that and the ability both of us have to speak our minds come from a common denominator to work with a common purpose.”

A shot at Strong’s staff? Who knows.

Wickline adds he’s “not at liberty to say” why the two years at Texas failed so badly with an 11-14 record and an ineffective offense. He coaches from the press box these days, something he never did in Austin and only for half of one game in Stillwater. Holgorsen calls the bulk of WVU’s plays, but even he said this week, “Joe calls a lot of plays. He’s involved with that. He’s upstairs with my quarterbacks coach, and they give me lots of good information and suggestions.”

But, Joe, how many actual plays did you call in Austin?

“That has nothing to do with what I’m doing now,” Wickline said. “I’m where I’m meant to be.”

Cedric Golden: For the first time in a long time, Texas players seem to believe

Eyes on Texas: For D’Onta Foreman, a 1977 Heisman history lesson from Earl Campbell