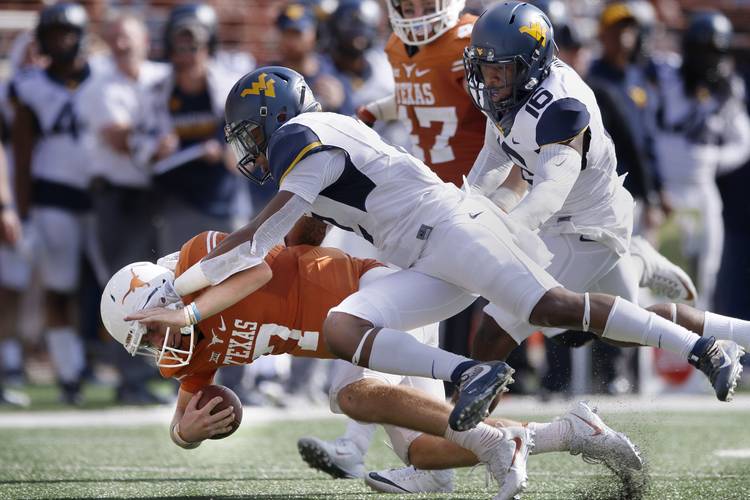 Even better was a solid 5.4 yards-per-play average.

And for the 11th straight game, running back D’Onta Foreman ran north of 100 yards, tying the school record owned by the immortal Earl Campbell.

And for the second time since he started calling plays, Strong’s defense forced four turnovers. Better yet, Texas held an opponent to less than 25 points for the third time in six games.

All that good stuff happening before an announced crowd of 96,367 and the Longhorns still lost.

Relax, Texas fan. I understand your frustration. You’re upset because it seems like whenever it’s time for the program to take a step forward, it comes up just short:

So the coach who once said Texas should never lose five games in a season has lost five games for the third straight season. I still caution you to not panic. The two previous wins over Baylor and Texas Tech keeps seven wins on the table and that’s what many observers were calling in the preseason. The Horns are actually better than they were in Dallas, Manhattan and Stillwater. They lost to the No. 16 team in the College Football Playoff rankings on Saturday, and were just a couple of plays from winning their third straight game.

It was a rare Big 12 slobberknocker where the defenses took center stage, which was pretty refreshing in a season where Big 12 scoreboards are being lit up at a record margin. Aside from West Virginia coach Dana Holgorsen audibly practicing for Wednesday’s Open Mic Night at Morgantown’s Blue Moose Cafe, the real story was how the Horns went all out only to lose for the first time in five games at their house.

So many opportunities, but not enough breakthrough to please a fan base by becoming bowl-eligible a week before a trip to 1-9 Kansas.

Call it what it is. West Virginia is a quality ballclub that had a lot to do with why Texas couldn’t get there. Defensive coordinator Tony Gibson gave young Shane Buechele and his offensive line a valuable lesson in disguised coverages and well-timed blitzes. Holgorsen’s offensive staff did a masterful job in isolating wideouts on slower Texas linebackers, particularly on third downs, where WVU was a sparkling 8 of 15. Quarterback Skyler Howard has seen better days, but he delivered some timely throws when his team had to have them and also smartly ran against an aggressive Texas defense.

This is the most balanced team Texas faced all season. Foreman earned his meal money against the Big 12’s top defense. He carried the bulk of the load on a day that Strong and offensive coordinator smartly left Tyrone Swoopes’ 18-Wheeler short-yardage package in the garage. Buechele displayed a vault of courage amid a fierce pass rush.

Most important was Texas not going away after falling behind 17-3 in the first half. It wasn’t enough.

Looking ahead, we know Strong will continue to answer questions about his job security through these final two weeks of the regular season, but his team is in place to get to 7-5. Kansas is scrappy but overmatched, while TCU will provide a nice gut-check in the finale.

A 5-5 team is far from what people in these parts are expecting in Year 3 of the Strong era, but I agree with him when he says progress is being made.

Texas is getting better. It’s absolutely acceptable to want more, but this isn’t a time for panic.

Eyes on Texas: For D’Onta Foreman, a 1977 Heisman history lesson from Earl Campbell