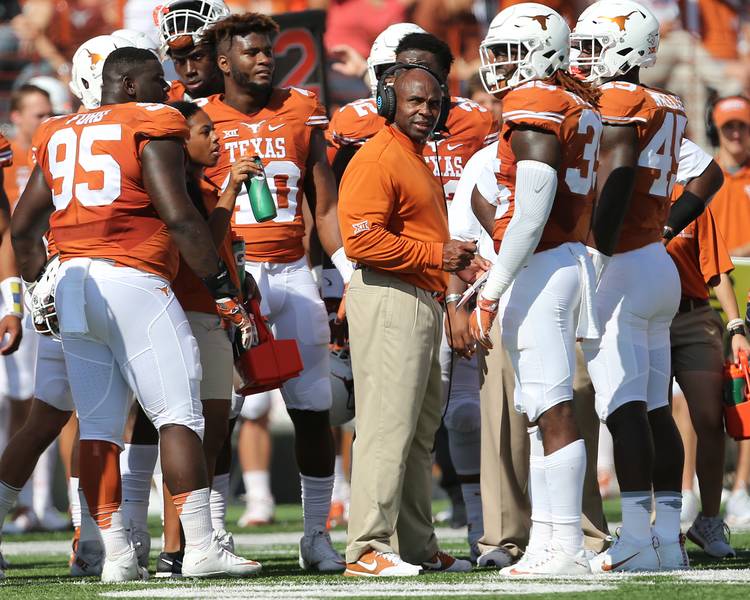 No separation in those words, just like zero room between Longhorns wide receiver Collin Johnson and three West Virginia defensive backs in the end zone on the game’s final play Saturday.

I just can’t shake the notion that Charlie Strong is not that far off. Win this one, and you’d be reading a column encouraging the school administration to publicly announce Strong would return in 2017 for his fourth season. Win these next two, and you will.

At this point, Strong’s beaten enough ranked teams (two), played competitive in enough games (nine of 10), won on the road (OK, one) and shown enough leadership (plenty) to deserve another year, despite an ugly record as Texas’ coach (16-19).

This opinion may not be popular within these city limits, but it’s clear Texas has shown unmistakable progress even if in defeat. Moral victories are a bad arbiter because they’re never reflected in the standings. Part of the progress — as bad as it sounds — is the fact there have been no embarrassing blowouts like Notre Dame or TCU or Iowa State last season. Lose to the lowly Jayhawks next weekend, however, and Charlie can leave a forwarding address.

It’s this close to going south as it is north. Oceans aren’t as fluid as Strong’s situation.

Texas has been in every game except the dreary Oklahoma State debacle, when the Longhorns couldn’t even make an extra point and forgot every tackling technique they’ve ever been taught.

The other four losses have all been by a touchdown or less although the defeats at Cal and Kansas State felt much worse. Maybe Strong doesn’t have that intangible, that force of will that a Nick Saban or Urban Meyer has, an I’ve-got-this defiance and command that can make Texas a big winner in the future. And maybe he never will.

I do know the Longhorns almost beat the 16th-ranked Mountaineers, falling 24-20 to a team that may be the Big 12 champion in a razor-thin game that could have gone either way. Sure, it dropped Texas to 5-5 and will continue to cast Strong’s future in an ambiguous light, something maybe only wins over 1-9 Kansas and an average TCU will secure.

But it says something that the Longhorns almost beaten both teams playing for the de facto championship next week when Oklahoma travels to Morgantown. Texas lost to ‘em both by five and four points. The Longhorns aren’t playing winning football, but competitive football, and that’s refreshingly different. Texas looks like it’s turning the corner, but it’s a damn long city block.

There was no Notre Dame magic on this November afternoon, but the locals were playing a much better team than the Irish. West Virginia has a solid quarterback, terrific skill personnel and a physical, crackerjack defense that abused the Longhorns’ offensive line and knocked Buechele into Sunday with what he called the biggest hit on him all season. Knocked the wind out of him. But did it knock the confidence out of Texas?

I think not. I see improvement. Not vast, but reasonable improvement. A 5-5 record doesn’t lie, but convert a turnover or two into a few more points against Oklahoma and West Virginia, and the Longhorns would be 7-3.

I say Texas is a good team. Is that going too far? Maybe it’s only a decent team, one that’s growing, one that has fight in it. The quarterback is a true freshman. So’s arguably the best receiver. So’s the center. All are pretty important positions. You think they won’t be better next year?

Does tailback D’Onta Foreman think Texas looks like a 5-5 team?

“No, I definitely don’t,” he said. “We’ve grown so much. I can really see it. Today, I don’t feel like the offense played to our standards, but I feel like we’ve grown as a team.”

The defense is playing wildly better. Since Strong took over the reins, his defense has responded with 16 takeaways in six games. That’s after one takeaway in the first four games. Sounds like progress.

And the players aren’t embracing excuses.

“I’m not sure it’s a youth thing,” cornerback John Bonney said. “It’s toward the end of the season, so all of that youth talk, you’ve got to kind of ignore that because everyone’s grown up now. We just have to finish games.”

“I really do think we have a really good football team, and I think we’ve made a ton of progress,” Strong said. “It was there for us.”

Bohls: Kansas is a no-win matchup that never matters — until it does