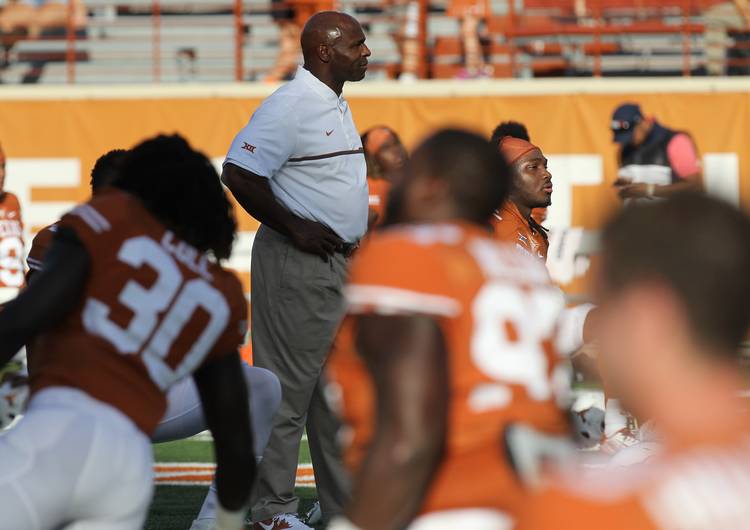 Even if it wins.

Of course, that means it must be Kansas Week, known throughout college football as Name The Score Week.

There isn’t a worse team than Kansas, which has won 10 games and lost 60 in the last six seasons. Not Rutgers. Not Rice. Not UMass.

Only Fresno State matches Kansas’ record of futility, and it’s already fired its head coach and hired a new one. It dumped Tim DeRuyter, who won two conference titles in five seasons but was pink-slipped after a 30-30 record.

Beat Kansas, and you did what you should do, what you have to do, what every other team does. And the oddsmakers agree, having installed the Longhorns as 23-point favorites.

Lose to Kansas, and the world ends. Charlie Strong’s world, especially. He couldn’t survive that and shouldn’t.

It wouldn’t matter if Texas beats very average TCU in the season finale because the damage would be done. If you can’t beat the Jayhawks — a team that’s 1-9 and has gone 1-21 in its last Big 12 games — there’s no way you can sell progress for the future, no matter how many promising freshmen will return next season.

Should Texas fall to the Jayhawks to dip to 5-6, school president Gregory L. Fenves should fire Strong next Monday. Why delay the inevitable? He’d better have a clear enough grasp of all the ramifications.

A 5-6 record in Year Three and a 16-20 mark overall would doom Strong to the coaches’ unemployment line. This game is this little and consequently this big. All the progress — and there has been plenty, because both the offense and the defense are better — would melt away in 60 minutes.

That’s why this is a Kansas game that Strong can only lose, and Lord knows he knows how to lose games. He’s lost 19 of them in three seasons, including five this season. He’s got that down to a science.

To make matters worse, Kansas gave redshirt freshman quarterback Carter Stanley the first start of his career. The Jayhawks do have a good running back in senior Ke’aun Kinner, who keyed Kansas’ season-high 244 yards rushing in a loss to the Cyclones on Saturday, but their defense allowed Iowa State 238 yards rushing.

Mere mention of Kansas brought out the obligatory reaction from players.

“You look at how they could have won against TCU or Iowa State,” wideout Dorian Leonard said, “and you can’t go in and take a team for granted. Just like us, the record doesn’t define the team. You’ve got to give it your all.”

Unfortunately, the records do define both of them.

The Jayhawks have had eight consecutive losing seasons since the Mark Mangino years. The Longhorns could conceivably have three straight with losses to Kansas or TCU and also to a bowl opponent.

Of Texas’ five wins, only one has come against an opponent with a winning record, but Baylor has now dropped three straight games since then and lost its starting quarterback.

“Kansas can sneak up on you,” Warrick said. “You don’t want to be that one team that gives them their first win (in Big 12 play).”

His unbeaten Houston Lamar team was a huge favorite over Seven Lakes but held on to win the first-round playoff game by a single point on a late game-winning touchdown pass. They reached the Class 5A Division I state title game before losing, but the Longhorns’ sophomore cornerback never forgot the lesson.

“You can’t walk in with your heads too high,” Bonney said. “If you look at Kansas’ record, you can’t fall into that trap.”

This is a Texas team that hasn’t handled what little success it’s had very well. Texas has never won more than three games in a row under Strong. The double-overtime victory over then-10th ranked Notre Dame in the season-opener seems a century ago.

“Yeah, you really don’t think the results would be like this,” nickel back P.J. Locke III said. “But you’ve got to live with it and deal with it. Our record doesn’t show who we really are.”

It’d better not on Saturday.