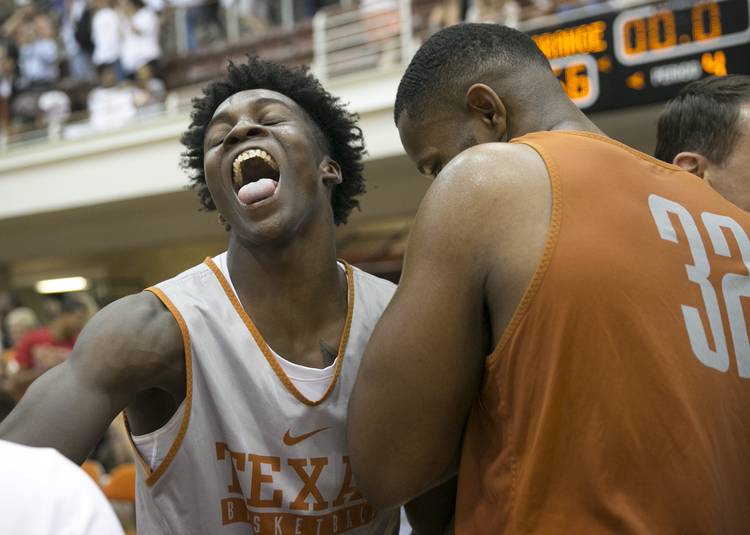 That happens when a college basketball coach in his second year says goodbye to his star point guard, another defensive-minded guard and practically his entire frontcourt. Hell, even an assistant coach changed his duties.

Which is why the Texas head coach isn’t sure what’s coming around the corner next. But he’s fascinated by the anticipation.

So is Andrew Jones, who is very much at the center of that growing process.

He’s just one of six newcomers, four of them freshmen, on the 23rd-ranked Longhorn basketball team (2-0) that hosts Eastern Washington on Thursday night. Jones knows something about growth. During high school, the precocious rookie from Irving MacArthur underwent a series of growth spurts like few others.

The summer before his sophomore year, he grew from 5-8 to a staggering 6-2. The following year, he added an inch-and-a-half in height. Now he’s bordering on 6-5.

“It was a huge jump for me,” Jones said. “My knees hurt all the time. I was real small, but my dad told me not to worry because I’m still growing. I get it from my uncle, who’s 6-9.”

Jones also grew into one of the top point guards in the state and earned a scholarship offer from Texas even though he’s hardly the prototypical point guard. No, he was always a scorer. A big-time scorer.

Oh, Jones could play defense, too, but only as a means to getting the ball back so he could score some more. But because he was taller, he’d be responsible for guarding the biggest man the opponent had, lining up against point guards and centers.

Not that he made a reputation for himself as a defender.

“He’s learning to reshape his mentality,” Smart said after Texas’ win over Louisiana-Monroe on Monday, in which Jones scored 12 points for his second straight game in double figures. “In high school, he did everything, but primarily he was a scorer. It’s been somewhat overwhelming for him physically and mentally and because I’ve been on his ass.”

In fact, he insists upon it.

“Me and him, we have a special relationship,” Jones said of Smart. “He texts me all the time. I don’t need him to be soft on me. I want him to tell me exactly what I’m doing wrong. He tells me all the time I need to lock in on defense.”

Jones will be very much a big part of a team that will suffer considerable growing pains as Smart tries to mold a winner out of “interchangeable parts.” Smart played no one more than 24 minutes on Monday on a team that started five new players from the one that ended last season with the heart-breaking loss to Northern Iowa on a half-court buzzer-beater in the NCAA Tournament’s first round.

Smart has a world of young talent and athleticism, but he’s got only one reliable scorer in the low post in electric freshman Jarrett Allen — James Banks and Shaq Cleare will block shots and clog the lane — and a bunch of raw players on the perimeter outside the more experienced Kerwin Roach Jr. and Eric Davis Jr.

Tevin Mack and Roach may have to shoulder much of the offensive burden from the guard position in the early going. But Jones and rookie Jacob Young have a decided offensive bent in their games and won’t be bashful about putting the ball up.

They’ll all look to push the ball as well as they did Monday when they outscored the Warhawks 18-2 on the break. Look for that to be a staple on this Texas team as it needs to find free points without a great half-court offense.

“When you have young guys, they don’t always understand the sense of urgency that you have to have,” Smart said Monday. “It’s no different than my daughter, really. She’s 5 years old. When I say it’s really important that you take a bath tonight, she doesn’t feel like it’s really important. For our guys, I do think they took a step tonight in terms of having a level of respect for the other team and understanding that if we don’t take care of business doing the things that go into winning, we’re going to have a real problem.”

In other words, Smart’s guys are taking their baptism — or their bath — by fire. That includes the confident, polished Jones.

He’s brash, wants the ball, added his two cents to a question directed at his older teammates on Monday and didn’t shy away from the fact he’ll share the point guard position with Roach.

“I’m emerging as a point guard,” Jones said. “I’m a big guy. And stronger than I look. This game’s only a step for me because I’m learning how to run this team at a young age and still be able to lead and get my players in position to score.””

His players. Jones has clearly hit the ground running and has no fear.

“Yeah,” he said, laughing, “I have a couple of inches left.”

Bohls: Kansas is a no-win matchup that never matters — until it does