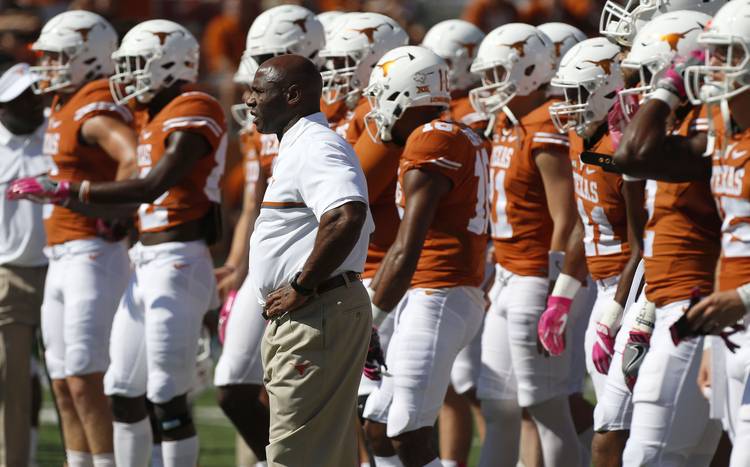 Texas head coach Charlie Strong with the team before a game against Baylor at Royal-Memorial Stadium, Saturday, Oct. 29, 2016. (Stephen Spillman / for American-Statesman)

File this under the heading of “Things you don’t hear every day.”

Kansas is a must-win for Texas.

You read correctly. It’s a must-win.

If Charlie Strong loses Saturday, he might want to cancel that return trip to Bergstrom.

There is no coming back from a letdown in Lawrence.

“You know, there’s no reason we should have a letdown at all,” Strong said. “We’re trying to get to a bowl game, and we need to get one win to get there. Our seniors deserve that, and I don’t think our guys will have a letdown. It’s all about us. It doesn’t matter who we’re playing or that they have the record that they have.”

For the record, Kansas is 1-9 overall and 0-7 in Big 12 play. The Jayhawks are one of only two one-win teams in the FBS. Fresno State is the other and fired head coach Tim DeRuyter at midseason. KU is on the verge of going seven straight seasons with one or fewer wins in the Big 12.

A must-win? You bet your December-in-state-bowl-game tickets this one qualifies.

Chuck needs this game. The program needs it. And on a sentimental level, a group of seniors would love to end their bowl-win withdrawal during the upcoming holidays. All but one senior is past time for a postseason win. Time waits for no one, and this class is coming to grips with its own mortality.

All of them understand that their class hasn’t risen to the level of success of the previous generations and that gnaws at their collective psyche.

“I’ve been thinking about it the last couple of days,” said Kent Perkins. “The seniors told me (when I was a freshman) that it was going to go by so fast.”

It’s a simple task in front of Perkins and his classmates: Beat Kansas to qualify for a bowl game. That’s the plan and it had better happen that way or major changes cold be on the horizon. When Strong came aboard for the 2014 season, he inherited a talented group of sophomores who had been a part of Mack Brown’s last stand. Some played in the 30-7 loss to Oregon at the Alamo Bowl then closed out Charlie Strong’s first season with a 31-7 Texas Bowl loss to Arkansas.

So now the Horns haven’t won a bowl game since taking out Oregon State in the 2013 Alamo Bowl. Either way, the old heads are burning for a bowl appearance and a victory, including the man in the biggest office.

Strong wants no part of the feeling in the locker room after the Horns closed out last season with a win at Baylor. It was then that I asked him about the reality of not playing in a bowl game despite having beaten Oklahoma and Baylor, both of whom spent time ranked in the top four nationally.

It was a real killjoy of a win because it showed the potential for future success while also shining a spotlight on past failures. Looking ahead to Saturday, I wouldn’t call Kansas a crossroads game since the Longhorns are expected to roll the Jayhawks by around four touchdowns, but a victory would serve at least three purposes:

Horns sophomore cornerback P.J. Locke places his senior teammates at the top of his priority list.

“It means a lot,” he said. “I know what it’s like to not get the seniors to a bowl game. I felt bad for Duke Thomas last year.”

You don’t need me to tell you much-better Texas teams than this one have gone to Lawrence nearly had their backs broken. In 2004, the great Vince Young had to convert a fourth down-and-18 to set up a game-winning TD pass to Tony Jeffery that kept the program’s Rose Bowl hopes alive — but not before a gratuitous offensive pass interference call against the Jayhawks. Eight years later, Case McCoy saved Mack Brown’s bacon with a TD pass to tight end D.J. Grant with 12 seconds to play.

The Horns should be in no mood for any last-second drama this time around. Take care of business, come home, eat some turkey and get ready for TCU.

“I haven’t had a chance to win a bowl game my whole time here,” Perkins said. “I would love to end my career in college with winning a bowl game.”

Editor’s note: The original version of this story was edited to correct the last year the Longhorns won a bowl game.

Eyes on Texas: With fewer scholarships to give, Longhorns not under recruiting pressure