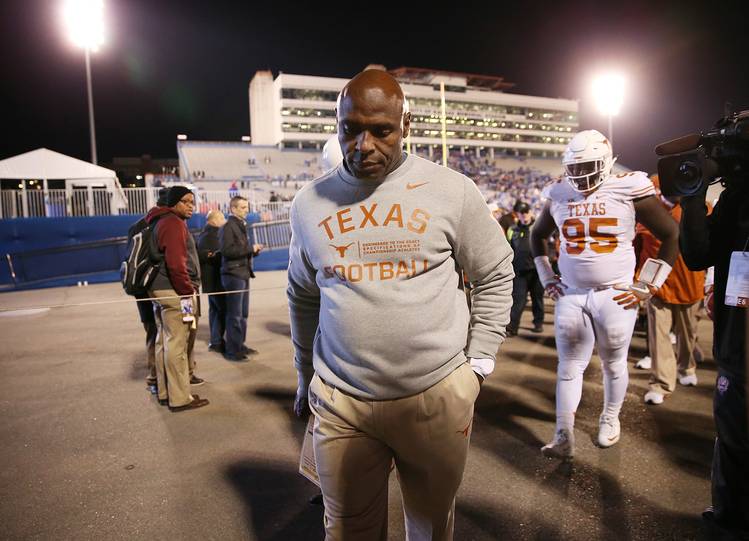 On a bleary day in the American heartland, Charlie Strong’s coaching tenure at Texas took a critical hit.

The guys who beat Texas won’t have their names emblazoned on the Memorial Stadium walls, but they made the memory of a lifetime at Texas’ expense on Saturday.

Simply put, the Horns gave it up to the worst football program in America.

Kansas entered the game with a 2-50 record in its last 52 Big 12 contests and a 1-21 record in coach David Beaty’s tenure. So Texas and Rhode Island now share something in common: Both have lost a football game to the 2016 Kansas Jayhawks.

The Rams can at least use the excuse that they play in the FCS.

Texas has no excuse.

And for Charlie Strong … it’s over.

He dropped to 16-20 in his first 36 games here and will finish without a winning record in the regular season for the third straight year. A win next Friday over TCU won’t mean much because it came after a loss to Kansas. His tenure will soon come to an end.

It’s a tough business and losses happen, but a team that knows its coach needs to win to save his job can’t turn the ball over six times and think they’ll still come away with a road win, not even against Kansas.

“The game was over,” Strong said of the 21-10 fourth-quarter lead that got away.  “Guys are hurting in there.”

You feel for the man behind those teary eyes. Strong is a likable coach who is genuinely loved in the locker room by his players and his assistants. But this isn’t a Harlequin romance. It’s big-time collegiate athletics where coaches are paid millions to deliver wins and not lose to teams like Kansas.

After wins over Baylor and Texas Tech, we talked about how tough it would be for Texas President Gregory L. Fenves to part ways with Strong if he finished with a winning record in the regular season.  Now Fenves’ decision has been made easy.

The 24-21 overtime loss was as bad as it sounds, much worse considering the opponent. This time there wasn’t a Vince Young to convert a fourth-and-18. There wasn’t a Case McCoy to ride on a white horse and save Mack Brown’s bacon in the final seconds. This time it was a dazed and confused Shane Buechele making inexplicable decisions at critical times and former Heisman Trophy candidate D’Onta Foreman putting the ball on the ground twice, the second time coming when the Horns were in position to put the game away.

“We never should have been in that position,” left tackle Connor Williams said. “We should have executed better. There’s really not much to say. It’s saddening.”

It’s a real sports paradox, friends: Strong got off the plane in Lawrence desperate to return for a fourth season and get the Horns into a bowl game after that 3-5 start. He couldn’t afford another toe-stubber like the 24-0 no-show at Iowa State in 2015, but we all figured the Horns were beyond that by now. They played a West Virginia team tough and had enough horses to quickly dismiss a Kansas team before an announced crowd of 25,697 that felt more like 15,000.

Here’s the tough part of big-time collegiate athletics: When a fan base becomes disenchanted with the head coach, it starts looking for what it deems to be better options. Strong appeared set to be the head coach in 2017 had he beaten Kansas and TCU to finish 7-5. That would have represented progress on a grand scale even though there are some who already had turned their gaze toward Houston’s Tom Herman.

Now, after Saturday’s gut shot, even more Texas eyes are glancing that direction because the most crushing defeat of Strong’s career came on the same weekend that Herman’s Houston Cougars shut down Heisman favorite Lamar Jackson and Louisville’s College Football Playoff chances. They’re not talking about Herman’s losses to SMU and Navy.

Now, Texas is Herman’s job to have. Strong will coach the Longhorns against TCU, but I don’t see him coaching them beyond that game. His office just took a hit  from which it will not recover.

Eyes on Texas: With fewer scholarships to give, Longhorns not under recruiting pressure

Bohls: Tom Herman coming on, but is he coming to Austin?