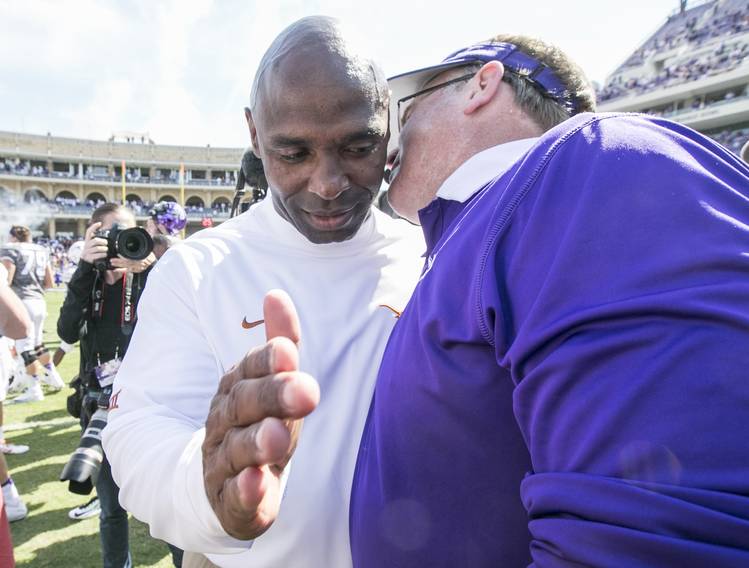 Texas coach Charlie Strong, left, and TCU head coach Gary Patterson greet each other at the end of the Texas at TCU game Saturday, Oct. 3, 2015, in Fort Worth, Texas. (Rodolfo Gonzalez/Austin American-Statesman)

FORT WORTH — Gary Patterson has won at TCU.

His Horned Frogs aren’t having the greatest season, but he has enough coaching skins on the wall to overcome the occasional valleys that come with college football. He has won 148 of his first 200 games at the school, including a Big 12 title and a Rose Bowl win over Wisconsin.

Life in Cowtown is pretty good these days, even at 5-5.

Patterson was in great spirits at his Tuesday media availability.

“Pumpkin or pecan?” he asked reporters after a 15-minute Q&A.

I like to call Patterson the Little General. Always one of the more entertaining coaches in the conference, he loves nothing more than to hand it to the big state schools like Texas and Oklahoma. Now you never know if you’re going to get the chuckling quipster we spoke to Tuesday or a bag of ornery rattlesnakes we see from time to time after losses. One thing he’s not is boring.

So why the cheery countenance, especially after Oklahoma State gave his team a 31-6 nuking, the most lopsided loss in his tenure?

Could be he’s pretty confident in the knowledge that he has owned Texas over the last two meetings with wins of 48-10 and 50-7. Could be he totally believes his team will bounce back from OSU, where he says his defense missed 20 tackles. Or maybe the Christmas spirit kicked in a week early.

Either way, Patterson is in a much better place than the guy he’s facing on Friday.

Charlie Strong is in the professional fight of his life. The Texas administration has been mum on his future, but all indications are he’ll be coaching his last game in the 512. The heartfelt displays of emotion exhibited by his players have made national news and have painted Strong in a sympathetic light in some circles.

I guess there’s a glimmer of hope that his players can recreate history in the same fashion that LSU’s players saved Les Miles’ job with a 2015 Thanksgiving weekend win over Texas A&M while school administrators were actually discussing his fate somewhere in the stadium during the game. The Tigers then spanked Texas Tech, 56-27, in the Texas Bowl. Of course you know by now that Miles got whacked four games into this season.

As for Texas, Patterson has viewed the situation from afar and told us he probably would have reached out to Strong had the two not been facing one another Friday. I asked if he expected the Horns to come out with the same emotion we’ve witnessed this week.

“I think they were going to be doing that anyway,” he said. “Sometimes that plays to your advantage and sometimes that plays to your disadvantage. I saw a couple of ballgames over the weekend where I thought it played to their disadvantage. That’s why I can’t worry about it one way or the other. I just have to worry about TCU. We played a team a couple of weeks ago that was going through that a little bit.”

Hey, it wouldn’t be a TCU presser without a subtle shot at Baylor. He’s referring to his team’s 62-22 win at Baylor on Nov. 5, when the Frogs rolled into Waco as an eight-point underdog and supporters of former Bears coach Art Briles were across the street from McLane Stadium selling #CAB (Coach Art Briles) T-shirts to tailgaters in support of the fired former head coach.

Patterson is hoping something similar goes down in Austin. Maybe the Horns come out on an emotional high after what’s gone down over the last few days but still lay an egg, giving the Frogs a chance to send Texas home without a bowl game for the second straight year while earning a 14th bowl bid in 16 seasons at the school.

Patterson told us he wasn’t interested in providing the Longhorns any bulletin-board material since it’s pretty much understood the Horns are expected to try and save their coach’s job with a win, even if the decision has probably been already made upstairs.

“It’s the sad part because I think myself publicly, I have no problem saying that Charlie is a good man,” Patterson said. “He’s a good football coach. I’m not saying that he is or he isn’t (fired), but I say it all the time that’s it all about fits. People ask me why I haven’t moved. Sometimes it’s not about what you do know about the place you will be going to be, but about what you don’t know.”

Strong knew the expectations when he signed up. What he didn’t know was it could end in disaster.

Friday is his last stand.

Bohls: Yet another Texas fumble — its handling of Charlie Strong’s exit