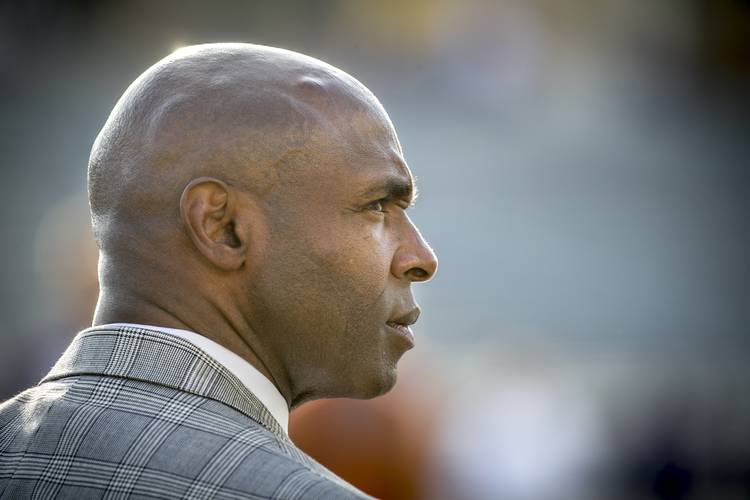 Texas coach Charlie Strong looks over the field before the Texas at TCU game Saturday, Oct. 3, 2015, in Fort Worth, Texas. (AMERICAN-STATESMAN / Rodolfo Gonzalez)

The final regular-season game for Texas on Friday is no longer simply a game.

It is a watershed moment that could have far-reaching implications.

The significance of the Texas-TCU outcome and what follows in the hours afterward will shape and define the reputations and careers and legacies of a football coach, an athletic director, a school president and a school chancellor. And maybe a football program.

But that is exactly what’s at stake for coach Charlie Strong, athletic director Mike Perrin, President Gregory L. Fenves and chancellor Bill McRaven. And an athletic program that is desperate to right itself and get back on its feet as what was once the gold standard for college sports.

It’s almost inconceivable that those three men in power could be basing their decision about Strong’s body of work on one game, and a game against a below-average TCU team, at that. If that’s true, it’s troubling on the face. If you’re basing your future on one game, you’ve already made a mistake.

Should they decide to keep Strong — a beloved figure who offers a lot of positives — they’d paint themselves as Boy Scouts who believe in participation trophies and ignore that Strong could become the first coach in the school’s 124-year history to have three losing seasons. College football became a big business long ago. If it wasn’t, Strong wouldn’t be making $5.2 million a year. So far he’s been paid $15 million for 16 wins, which is hardly a pleasant ratio.

They erect scoreboards at stadiums for a reason. They don’t lie.

I’m not suggesting a decision to retain the coach would shorten Perrin’s and Fenves’ tenures at Austin, but big money donors have long memories. And they have deep pockets, pockets that those two need. And while Fenves seems to have little clue about athletics, he does understand the power of money.

And Perrin should know better than either Fenves or McRaven. Perrin actually played the game. He knows that the three winningest Longhorns coaches ever — Darrell Royal, Mack Brown and Fred Akers — combined for only two losing seasons in their 46 years. Two. And the last two coaches were fired.

Let’s get this straight. Yes, Brown was let go after an 8-4 regular season in which he came within a half of beating Baylor and winning the Big 12, but he didn’t leave the program in a mess or in scandal. And he left with a perfect NCAA graduation rate in his last season.

True, there was plenty of entitlement after the national championship in 2005, but an entire culture didn’t need changing. To imply otherwise wrongly and deeply impugns Mack’s spectacular career. Mack had his own core values of communication, trust, respect and a common purpose. He just didn’t tout them at every turn.

Ever since his players walked off the hallowed field that is the Rose Bowl in January of 2010, solemn after the loss to Alabama, little has gone right for Texas football. Colt McCoy suffered a badly pinched nerve in his shoulder on the fifth offensive snap, never to return. Alabama prevailed and established itself as football’s newest — and enduring — dynasty while Texas went in the opposite direction and continues to trend south, a prolonged slump that drastically begs for change.

Of course, fixing football isn’t the critical societal issue that affects the world that Texas so wants to change. It doesn’t rise to the level of a controversial and divisive concealed weapon law in classrooms or a polarizing Jefferson Davis statue on campus that will now grow cobwebs out of sight.

But to dismiss the school’s decision about its current coach is folly. Some in this world of misplaced priorities would say the process sorting out Strong’s future is even more important than those two causes that Fenves had to deal with. They are wrong, but that doesn’t make this a trivial matter.

It is Texas football, after all.

The Longhorns could win Friday, but they don’t celebrate being 6-6 and qualifying for a bowl game. Those aren’t standards. Those are unacceptable embarrassments.

Maybe Fenves wants to de-emphasize football. Maybe Perrin has forgotten that he played for Royal in the same stadium that bears his name. Maybe they don’t care about Longhorns tradition, but I find that hard to believe.

I’m all for fairness. Strong is a truly wonderful man that we all like and admire. He’s a very good coach, but it’s not working. Texas isn’t paying him to be a guidance counselor or a father figure. Those traits are terrific, but that and winning shouldn’t be mutually exclusive. The school cannot let 18- to 20-year-olds make its decisions for it.

Strong is flirting with matching the three consecutive losing seasons of 1936-38. Even if he pulls out a badly needed win — and it says here Texas will win big over TCU, 38-21, and Strong will be triumphantly carried off the field — it shouldn’t change anything. Change is necessary. His 16-20 record and inexcusable loss to Kansas near the end of Year Three provide compelling evidence that Strong isn’t getting it done. Every step forward is followed by one in retreat. It has been painful to watch because Strong is so beloved.

So sometime after Texas leaves the field at Royal-Memorial Stadium amidst the Friday dusk, McRaven, Fenves and Perrin will huddle with advisors and make a final, climactic decision.

It will alter perceptions and careers and legacies. No pressure.

Bohls: His final lopsided loss should spell the end of Charlie Strong’s tenure