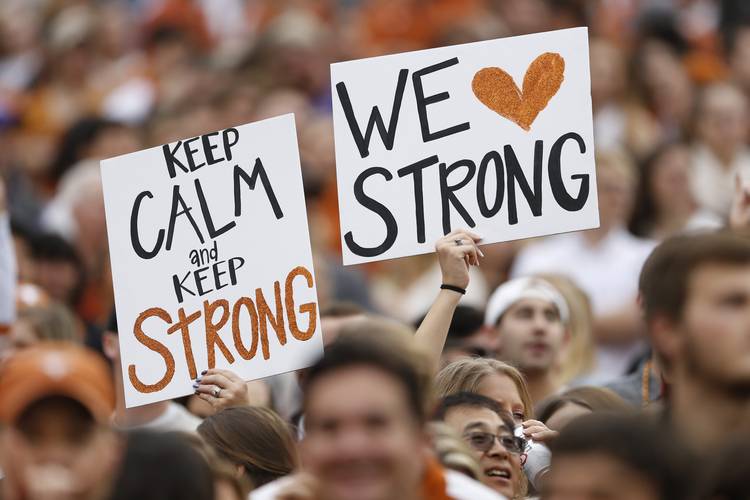 If Kansas was a funeral, then TCU was the burial.

The Strong era came to an unspectacular end before a sparse crowd at Royal-Memorial Stadium on Friday. Many stayed away because they had already seen enough after the Kansas jaw dropper. The truth had already hit the fan base right between the eyes long before Texas took the field for Senior Day.

Now the fan base is confronted with an obvious truth: Strong was a great idea at the time, but the results didn’t add up to the hype. A 16-21 record and embarrassing losses in Lawrence and Ames will always be part of his Austin story.

It ended in fitting fashion, with a fluttering Shane Buechele pass finding the arms of TCU defensive back for an interception.

Game over. Season over. Tenure over.

The 31-9 loss wasn’t really as bad as sounded considering the Horns trailed 10-9 with nine minutes left in the third quarter. But they couldn’t hold it. TCU isn’t a great team, but TCU hasn’t been bad for three years like Texas. Even in a season that will end with without double-digit wins for the first time in three seasons, the Frogs had enough to turn back a Texas team that fell short of expectations for a third straight year.

In his postgame interview, Strong spoke of being hired and his plans to be an impactful presence in the lives of the players under his watch, and at times he switched to the past tense which made it seem like he already knew that his time here is over.

He did impact their lives on and off the field, but in the business of college football, a coach making $5.2 million had better impact the win column often or the gate will be waiting.

“Tonight was about the seniors,” Strong said in an introspective tone. “What bothers me is they don’t have the chance to go to a bowl game for the second straight year.”

The thing that should frustrate Strong supporters more than anything is this team not getting it done under favorable circumstances time and time again. The flubs are too numerous to mention in one column, but you can start with the night Duke Thomas bit on that pump fake against UCLA at Jerry World, then the time Nick Rose missed the extra point against Cal that would have forced an overtime, to the day Michael Dickson dropped the punt snap against Oklahoma State near his own end zone. You can add the three missed extra points in Stillwater as well.

The mistakes go in the player’s stat column, but the responsibility ultimately lies with the head coach. Strong cashed fat checks but the fan base didn’t reap enough rewards to make retaining him a smart move as we look ahead.

Funny as it sounds, he could have been saved from the Turk as early as a week ago when the Horns arrived in Lawrence needing just a win over the worst football program in America to get to a bowl game. All they had to do was not color outside the lines and beat a team that hadn’t won more than two Big 12 games since Obama’s first presidency.

Spin ahead to Friday and the Horns were up against a beatable opponent at the house where they had lost only one game this season. The Frogs are not exactly a title contender in their current state, but they stuck to their physical approach and wore down a Texas defense that just couldn’t carry an offense that had come brutally one-dimensional offense any further.

Running back D’Onta Foreman left the field in tears after running for 165 yards and what should have been ruled as a touchdown, but it wasn’t enough to overcome what finished up as a tidal wave of football failure in 2016. Foreman isn’t saying anything just yet, but his emotion told me all I had to know about his future. Just like his head coach, the chances of him coming back next season aren’t very good.

Strong didn’t speak long to the players after the game. What could he say that hasn’t already been said? They know the score: 6-7, 5-7, and 5-7 is not the stuff of return engagements.

He didn’t win enough. It’s the main reason Charlie Strong won’t be back here in 2017.

Good football coaches don’t always win and it wasn’t in the cards for Charlie to be a success in Austin. He won’t be at Texas next season, but I hope to see him on someone’s sideline next year.

Bohls: His final lopsided loss should spell the end of Charlie Strong’s tenure