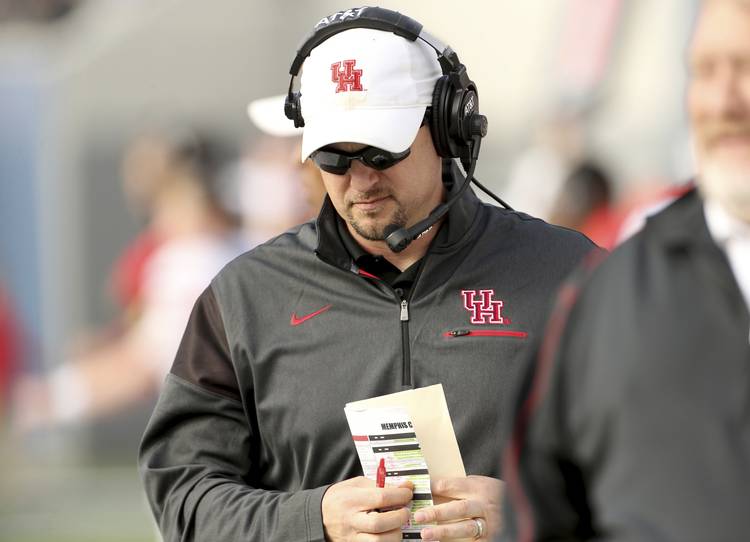 Texas got its man, but is he the right man?

Tom Herman, the former Longhorns grad assistant, is returning to where it all started for him. He once was a faceless, anonymous guy riding down Congress Ave. on a float, sitting next to Ricky Williams during a 1999 victory parade. Now he’s coming back with hopes of one day feeling the ticker tape fall again from the downtown skies. People around here are starved for national relevance, and the Charlie Strong hire didn’t bear winning fruit on the field so Texas is back at it again, this time with the hottest name in coaching circles.

Did Texas handle this the right way? Was backup up a Brinks truck to Herman’s driveway in Houston the right call after LSU reportedly turned down his agent’s $6 million request in favor of sticking with interim coach Ed Orgeron?

We’ll know in due time.

This has to go down as one of the most seamless coaching hires in recent Longhorns history. Herman was essentially going to LSU or Texas, and it turns out the Tigers weren’t interested in a tug-of-war with the folks in Austin, especially with Tigers players going to bat for Orgeron, who was promoted soon after talks with Herman ended. “This thing was never going to come down to a bidding war,” LSU athletic director Joe Alleva told the Baton Rouge Advocate. “Coach O wasn’t going to play games with us.”

That could be perceived as a shot at Herman and his agent Trace Armstrong for submitting an offer that was way out of LSU’s ballpark.

Coach O made more financial sense for the administration in Baton Rouge. We also know Orgeron is one of the most experienced people in his profession, but what of Herman and his two years of head coaching experience? Did Texas President Gregory L. Fenves and athletic director Mike Perrin do their due diligence with this hire? Relieving Charlie Strong was absolutely the right call, but is Herman the Longhorns’ best play moving forward?

Herman’s a good coach who comes from good coaching stock, having served at the pleasure of national championship coaches Mack Brown and Urban Meyer, but he is far from a slam dunk. His Houston Cougars were double-digit favorites against SMU and Navy and a touchdown-plus favorite at Memphis, but they lost each game, though Saturday’s barn burner could have gone either way.

Former Longhorns star Roy Williams told me he didn’t like seeing Herman point to injuries as a factor in Friday’s 48-44 loss.

“I don’t mind the hire,” Williams said. “He just rubbed me the wrong way about (the injuries). I can’t stand excuses. Those same guys were out when you were up late in the fourth (quarter). Just lose, take the blame as a coach and move on.”

Herman is moving on — from Houston, and hopefully will do what Strong failed to do: Win games on a consistent basis. Charlie left behind some very talented players, so Herman, just like when he took over at Houston, will have some weapons at his disposal. Star running back D’Onta Foreman will most certainly go pro with Strong out of the picture, but the receiving corps is loaded and several defensive studs will be back, including linebacker Malik Jefferson, defensive ends Malcolm Roach and Breckyn Hager, and ball-hawking cornerback P.J. Locke III.

Still, I’m surprised that Texas didn’t expand its search. Nick Saban, Dabo Swinney or Meyer weren’t coming here, but what’s the harm in doing a cursory reach-out to proven coaches like Oklahoma State’s Mike Gundy or Washington State’s Mike Leach, both of whom have won in the Big 12 and have recruited the state for more than a decade. Maybe Florida State’s Jimbo Fisher would have listened, though his family obligations would have made him a tougher sell.

The Longhorns smartly recognized that Herman was the hottest name out there, and many in the fanbase surely are elated, but once again, Herman’s no slam dunk. You can point to his 22-4 record in two seasons at Houston, and that’s a fair argument, but also consider that Strong went 23-3 and 12-3 in his conference over his last two years at Louisville, which included a Sugar Bowl win over Florida, before Steve Patterson tabbed him to replace Mack.

Herman will be given every opportunity to succeed as long as we see some on-field signs of progress, the lack of which ended up playing an enormous role in Strong’s dismissal. While I don’t necessarily agree with Strong’s assessment that Texas will win a national championship very soon, I do agree with the premise that brighter days are ahead at Texas.

Oh, Texas and LSU begin a home-and-home series in 2019, with that first game slated for Royal-Memorial Stadium.

In the latter case, let’s hope it’s the right man.

Bohls: Charlie Strong is a good guy, he just wasn’t THE guy for Texas