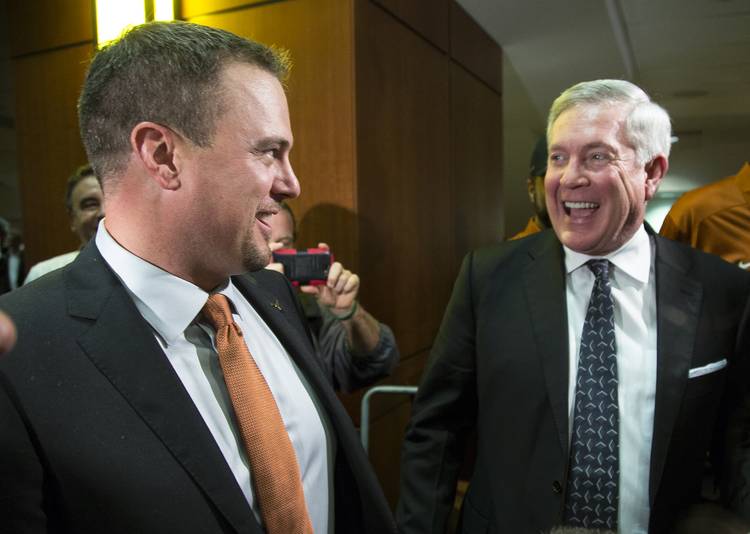 Tom Herman joke with former Head Coach of Texas Mack Brown after the press conference in the Carpenter-Winkel Centennial Room of the Bellmont Hall on Sunday, November 27, 2016. RICARDO B. BRAZZIELL/AMERICAN-STATESMAN

He’s going to need them to make this Texas turnaround happen in quick fashion.

One of the biggest, former Texas coach Mack Brown, didn’t have to check the internet or ask his buddies at ESPN about Texas’ latest coaching news because he got it straight from the source.

After he became the 30th head coach at Texas, Herman placed a call to the man who essentially introduced him to big-time college football. Brown was getting ready to go into the studio for his analyst gig on Saturday morning in Bristol, Conn. when the phone rang.

He then asked Brown a favor: Could you attend Sunday’s introductory presser?

Ever the loyalist, Brown jumped on a plane and showed up Bellmont on Sunday wearing the same black suit he wore on television Saturday.

“I didn’t have time to go home and change,” he said.

In many ways, it’s similar to the day Mack and Sally Brown were introduced to Austin nearly 20 years ago. Brown had made a successful go of things at North Carolina and was looking for his next biggest challenge when Texas came calling. Herman beat six top-25 teams at Houston and went 22-4 and in two seasons before Texas came calling.

Brown calls it a great hire and said the passion we saw from Herman in room of about 200 Sunday is the same passion he displayed when he was running errands as a graduate assistant under then-Texas offensive coordinator Greg Davis back in 1999 and 2000.

“We used to laugh and say, ‘Don’t tell Tom you want something unless you’re going to get it because it’s going to be right back,” Brown said.

Herman remembered as much, saying a coach asked him for 10 copies he would come back with 12.

Well, Tom, Longhorn Nation is asking for a return to the thrilling days of yesteryear when Mack had the Horns in the middle of the national title picture most every season. And if the copy paper story means anything, they would love for you to deliver in a hurry. This program hasn’t reached those dizzying heights in quite some time and a Houston-like turnaround would be more than appreciated on the Forty Acres.

As for Sunday, Herman didn’t attempt to avoid the avalanche of expectations when asked about his plans for Austin.

“We will win championships,” he said. Then later, “Winning is hard. They don’t give or hand out championship trophies.”

Charlie Strong always credited Brown with lending an ear whenever he needed advice on something but I get the feeling that Mack will be an even bigger resource for Herman, who will counts men like Urban Meyer, David Bailiff and Paul Rhoades as mentors.

No hire is a slam dunk, but Herman has a great support system that will make this climb easier than it would have been under other circumstances.

“I think it’s a great hire,” Brown said. “No. 1, he’s been at programs like this that have been successful. No. 2, he took Houston and won a bunch of games over people that had as good or maybe better talent in some cases. He’s had a time here so he understands about the place and the most important thing to me are the 23 years of recruiting the state.”

That sounds like the best letter of reference one could ever ask for from a role model. Herman told me that things went by so fast in the hiring process that he didn’t really have time this week to reach out to Brown until he made the call informing him of his new gig. He did say he has reached out to Brown numerous times over the years about numerous things, something that won’t change now that he’s about to embark on the biggest challenge of his coaching career.

He did great things at Houston, but this is Texas and a rabid fan base, which believes it’s on par with the Alabamas and Ohio States of the world, even though the program has been in the wilderness of mediocrity for seven years now.

Texas fans will hope to see an amalgamation of Herman’s mentors in his new gig: Mack’s organizational/CEO skills, Urban’s game-day management, and hopefully some championships down the road.

His days of making copies are long past.