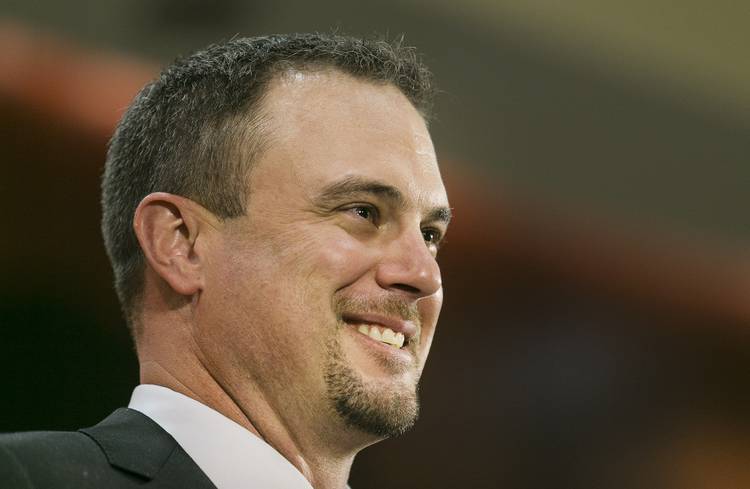 Our new local football coach seems to be a persistent fellow when he has his eyes on a star recruit. And Tom Herman also seems to have a sense of humor in the face of adversity.

That first trait should help him succeed in Longhornville. That second trait could serve him well if he doesn’t win a national title in his second year on the job.

Back in January 2014, when he was offensive coordinator at Ohio State, he was on the recruiting trail in Georgia. Seems a young man named Lorenzo Nunez had caught his eye.

On the way back to the Atlanta airport, Herman got ensnared in what Atlantans – just about as unprepared for snow as Austinites are – inevitably and uncreatively came to call “Snowpocalypse.”

It was a big, crippling storm that created epic traffic jams that lasted far longer than even a college football game in which 95 passes are thrown, the refs review every other play and your team is losing.

Herman got caught in the Atlanta mess behind the wheel of a rent car on Interstate 285 and live-tweeted his 19-hour overnight ordeal. We’ll assume, being a Mensa member, Herman tweeted while stuck at a standstill. You get kicked out of Mensa for doing dumb stuff like tweeting while driving.

The blizzard info was OK. Not sure we needed the bladder info.

A half-hour later: “Live update from ATL. I’ve moved .6 miles in the last hour. Yes, there is a decimal point in front of that number.”

An hour later there was this from Herman, by then an offensive coordinator eager to establish the ground game: “It’s official Buckeyes. Just crossed the 10 hour threshold for 50 miles drive from Marietta to ATL. Still have 5 miles to go. #RecordBreaker.”

Just after 10 p.m.: “Breaking News: Still on I-285. 12 hr mark passed. At least I’m getting some quality reps at Flappy Bird. #CompetitiveExcellence.”

Flappy Bird is the offense Herman plans to install at UT. No, it’s not. It’s a video game.

At 11:12 p.m., Herman contemplated a new game plan, again centering on the ground game: “12 hrs and counting. Would it be bad form to leave my rental car on the freeway & just walk the 3 miles to my hotel?”

As we’ll see, he eventually decided it would not be bad form.

As 12:19 a.m., his sanity stretched, he began to count his blessings, not unlike a man facing death might do:

“I want to thank @4Warinner for the Starbucks coffee 17 hrs ago. Was the last thing I ingested and I truly appreciate it right now. #Delirium.”

At 4:12 a.m., Herman’s plight brought this tweet of sympathy from David Beaty: “Just woke up and saw that my buddy @CoachTomHerman is still stuck on an Atlanta Hwy. Past the 17 hr mark now. Prayers for u and all around u.”

Back then, Beaty was Texas A&M’s receivers coach and recruiting coordinator. He is now head coach at Kansas, whose recent upset win over the Longhorns went a long way toward Herman getting the head coach job here. Funny how life works.

The next tweet came from the Atlanta airport at 7:31 a.m: “Going through security now. Story coming shortly, Thank God for men like Terry Spiller. Saved me ¾ way of my 4 mile walk to airport.”

Herman, having abandoned his rent car, encountered fellow traveler Spiller, wearing a Delta Airlines coat, at a gas station. Spiller gave him a ride to the airport.

The wrap-up came in a multi-tweet series that ended at 7:51 a.m.

“So… 19 hrs in my car with hundreds of my closest friends. Too much ice and accidents to move. Gotta make flight to DFW. Call National Rental. Tell them I’m leavin the car and start walking the 4 miles to the airport with my luggage. Fall at least five times in the first 2 miles. Find a gas station. Terry Spiller, my dude, shows up and won’t take a dime to take me the final mile or two to the airport. @MeganWhitt1 gets me on 9 am flight to DFW. Now boarding the plane. Please pray for those still on the roads. Probably 24 hrs til cleared.”

At the time, Whitt was Ohio State’s recruiting and operations coordinator.

Mike Huguenin of nfl.com documented the ordeal at the time.

“One of the main recruiting targets on Herman’s visit to the Atlanta area was Lorenzo Nunez, a four-star quarterback in the 2015 recruiting class from Kennesaw Harrison,” Huguenin wrote. “It’s probably safe to say that if Nunez signs elsewhere, he automatically becomes Herman’s least-favorite player ever.”

But Herman did sign offensive lineman Demetrius Knox of Fort Worth, who he went to see after the Atlanta to Dallas-Fort Worth flight.

Golden: D’Onta Foreman’s decision to jump to the NFL was a no-brainer