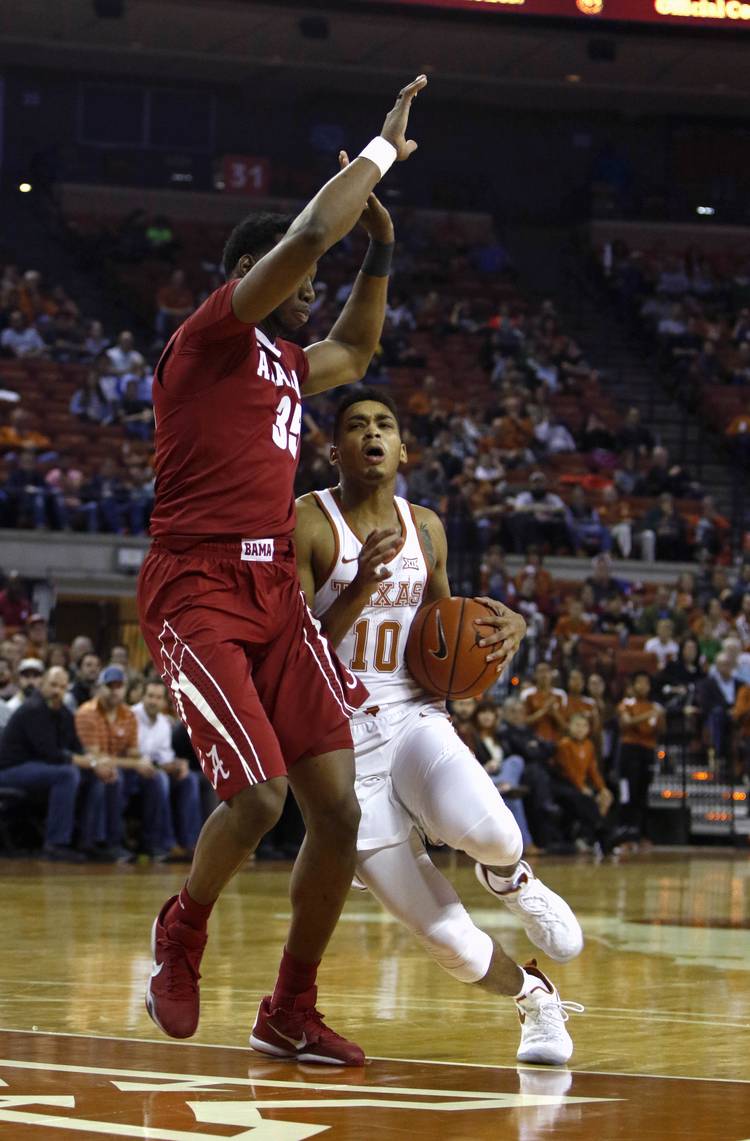 Yep that was the Texas sophomore guard back doing his thing after spending much of the first part of the season in a basketball wilderness.

The 16 points he scored in the the 71-65 win over Long Beach State had to feel like 50 especially since he had only scored 15 in his previous four games.

If Davis had a million bucks in his checking account, it would not have done him one bit of good because the dude simply couldn’t buy a bucket after scoring 16 in the opener. Try as he might, he couldn’t solve the puzzle of those brutally unfriendly rims at the Erwin Center and other locales.Through the first eight games, he had yet to make half of his field goal attempts in any contest. Add that glacial 6-of-41 shooting from the three-point line and you get an idea of how bad things have been for the sophomore swingman.

Funny thing about shooting slumps. They can break a player’s confidence in a way similar to what the desert sun does to a thirsty man’s canteen. To struggle night in and night out can drain the spirit. Davis claims he never wavered in his belief, something his head coach isn’t buying for one second.

“He’s 19 years old,” Shaka Smart said. “Nobody wants to admit those sorts of things but I think adversity… it can be a really good thing if he’s willing to learn from it.”

Relief finally arrived for Davis against the Beach, which was globs better than its 2-10 record. Davis missed his first try off the bench, a three, but knocked down the next one from behind the arc. And just like that, the old confidence started to show in his body language. The Horns struggled in the first half but slowly gained control in the last 20 minutes behind Tevin Mack and Davis, who hit a triple and followed up with a nice baseline reverse layup to put the Horns up seven down the stretch.

“Welcome back, ED,” Mack told his close friend after his best sequence of the young season.

He needed this and so did this team. The Horns are still without a proven point guard and Davis has had to share some ballhandling duties with Kerwin Roach and freshman Andrew Jones, all while trying out how to get his stroke back. He struggled though a 3-for-11 performance against Michigan Tuesday but the Saginaw product was able to be around his folks which had to help his psyche. They say when things aren’t going well, it’s always a good idea to go see Mama.

“I talked to my mom a lot,” he said. It’s kind of weird because coming from high school she really didn’t say too much but seeing me in college she’s calling me asking what’s going on and (saying) play better.”

Merry Christmas — that’s a great name for a mom, especially at this time of year — even jokingly threatened to come down here to straighten him out but apparently the talk was enough. Shaka did have an excellent point when asked about Davis’ breakout game. One game doesn’t mean that he’s back. It’s a beginning but there is still so much room for continued growth.

While the head coach isn’t too happy about a 5-4 start to the season, he has to be pleased that leaders are emerging. Seniors Kendal Yancy and Shaq Cleare have been the loudest voices in the locker room and Mack — easily the MVP at this point — has been a reassuring presence with Davis. Some of you remember that Mack spent quite a bit of time in his own wilderness this time last year when he started his freshman season by making one of his first 18 field goal attempts and three of his first 30.

Smart doesn’t have the luxury of experienced depth at the perimeter positions so team will have to sink or swim with Mack, Davis, Roach, and Yancy. That’s why it’s so important that Mack pulled Davis aside last week and encouraged him to get in the gym and get some shots up. Mack put in some real work in the offseason in the weight room and also on his mental game. To that end, Smart complimented him for responding in fine second-half fashion after a slow start against Alabama to help pull out a win two games ago.

“Last year, you wouldn’t have done that,” Smart said.

“Last year, I wouldn’t have gone back in,” Mack responded.

So Mack is on a nice roll and Davis may be starting one.

“Overall we need to continue to understand how much we need each other,” Smart said. “I don’t think we’ve fully figured that out yet. We will be the best team we can be when we understand it’s possible through each other.”

Davis is smiling for the first time in weeks because he saw some some shots go in from the perimeter and while that’s far from a cure-all, it’s a huge step forward because we’ve all seen how good he can be when he gets it going. If anything, Smart is sleeping a bit better knowing that Davis has put a solid all-around game on tape for the first time this season.

It sounds simple but sometimes seeing is actually believing.

Golden: Houston’s hire is a win-win for Texas, UH and Major Applewhite himself