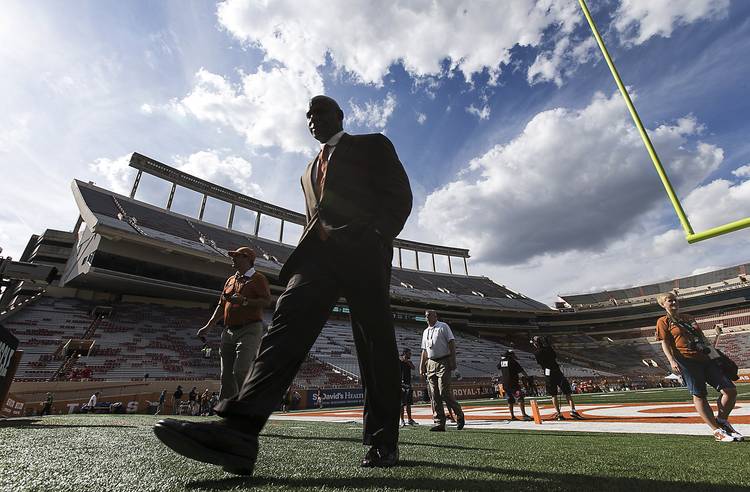 Charlie Strong didn’t get it done at Texas, but he got another chance.

You see, there was a time when a black coach rarely got a second chance to prove his worth as a head coach.

Apparently, times are slowly changing for the better in college football, which has been slow to embrace the progressiveness shown by the NFL and the NBA in the hiring of black coaches.

Strong is the new head coach of the University of South Florida, a member of the 12-team American Athletic Conference. For one reason or several, things didn’t work out for him at Texas, where he compiled a 16-21 record, statistically the worst three-season run for any coach in school history. While Longhorn Nation was disappointed in his showing, the black community pondered whether we would see Strong on a sideline as a head coach again. History suggested it might be awhile.

When the Horns dropped that fateful game at Kansas, I told anyone who would listen that we wouldn’t see Strong again in a Power 5 coaching gig. That may be true, but the events of the past week make it possible for him to one day head a major program again.

The numbers aren’t good for black head coaches in college football. Entering this season, only 12 of the 128 FBS coaches were black (15.3 percent), five fewer than there were in 2011, according to the Institute for Diversity and Ethics in Sport. Four of those — Strong, Texas A&M’s Kevin Sumlin, Texas State’s Everett Withers and UTSA’s Frank Wilson — coached at schools in Texas. The numbers are in stark contrast to the number of white head coaches.

With no Rooney Rule in place to ensure minority candidates get interviews, the decision is left largely to white college administrators who are more likely to stay in their comfort zone, especially in programs that have never been led by a black head coach or athletic director.

This issue is much broader than whether or not Strong deserved another year at Texas. Losing to Kansas killed any chance of that, and Strong should have been let go. Here’s the big-picture view: Strong’s lack of wins here were a setback for other blacks hoping to land Power 5 head coaching jobs because his hiring represented a tremendous opportunity to open more doors for coaches of color.

He didn’t win, and some of those doors will remain closed as a result. Administrators in high places were watching to see how he’d fare in Austin, and when he didn’t win, some may quietly have closed the book on the possibility of bringing in a black coach in the future.

As a result, it’s possible that jobs like Texas may not be as readily available as they were before former athletic director Steve Patterson made Strong the first black football coach in program history. According to TIDES, 87.5 percent of athletic directors and nearly 90 percent of university presidents were white during the 2015 academic year, which could make it less likely that more minority candidates are even getting interviews.

I’ve often lamented how white coaches like Gene Chizik, Charlie Weis, Ed Orgeron and Will Muschamp could struggle in one Power 5 job yet still land another one as if nothing had happened, while black coaches like Sylvester Croom and Karl Dorrell never resurface with head positions.

Nowadays black success stories like Stanford’s David Shaw, Willie Taggart — who left USF for Oregon after starting his coaching career with a 16-20 record in three seasons at Western Kentucky — and James Franklin, a rising star after success at Vanderbilt and Penn State, are easier hiring considerations for Power 5 ADs, but not so much when a black coach has struggled in a previous spot.

Strong landed the Texas job because he went 23-3 with a Sugar Bowl win over his last two seasons at Louisville, but we’re still waiting for the second black coach to get hired at a major program after being fired from another. It hasn’t happened since Tyrone Willingham was hired at Washington in 2004 after being fired at Notre Dame.

As for Strong, it’s good to see him back on the sideline, though history suggests we will never see him at the helm of another Power 5 school.

For now, it still is.

Bohls: I nailed some Texas predictions, but was Trent Domingue-wide on others