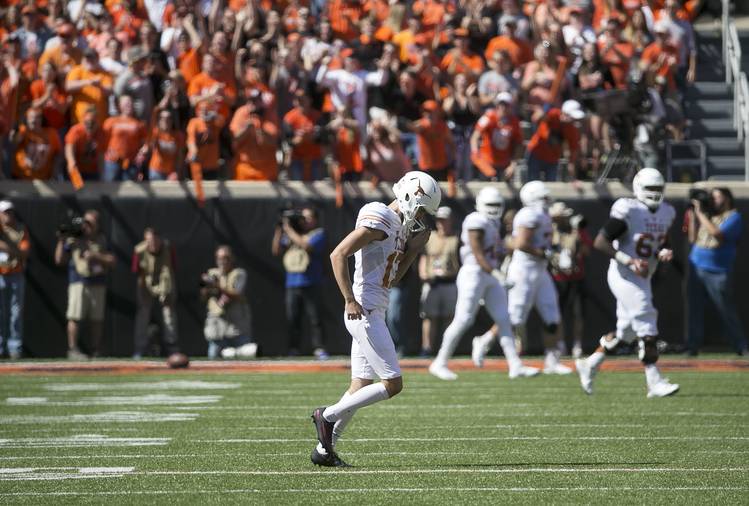 Texas kicker Trent Domingue hangs his head after another of his field goal attempts was blocked by OSU in the second quarter at Boone Pickens Stadium in Stillwater, Ok., on Saturday, October 01, 2016. Texas lost to OSU 49-31. DEBORAH CANNON / AMERICAN STATESMAN

Time to fess up.

This used to be a lot more fun when Mack Brown was the coach and we in the media could at least count on a bowl game now and again. Not so much the last two years.

Regardless, here’s the review of the preview where we take a look at my Sept. 1 preseason predictions column for the Texas football team. I got a few right, but missed several, too, especially the final record.

I wrote in September that I saw “a window of seven to nine wins, but don’t bet on 10.” Ten, I remember now, was Charlie Strong’s guarantee for 2017, not 2016. It turns out there was no window, just a closed door on a winning season, one slammed in the faces of Longhorns fans everywhere.

(1) I predicted Shane Buechele would start every game. Hooray, starting out 1-0. Can I stop now?

(2) Backup Tyrone Swoopes will have success in his short-yardage package (modest overall, but lots against Notre Dame), but give up some snaps to Jerrod Heard (nope). Swoopes will score five touchdowns (seven, actually) and also throw for 95 yards and a touchdown (66 yards and no touchdown when his touchdown pass to Caleb Bluiett against Texas Tech was called back).

(4) John Burt will excel as the featured receiver and finish with 62 grabs for 780 yards and eight scores. (Not even remotely close; Burt was the team’s biggest offensive disappointment and finished with just 18 catches for 201 yards and a single score. Is it track season yet?)

(5) Collin Johnson will be the second most prolific wideout as the red-zone target with 33 catches for 574 yards and five touchdowns. (Fairly close. Buechele did look for the tall freshman in the end zone, and Johnson had 28 receptions for 315 yards and two scores.)

(7) Freshman Devin Duvernay will split slot duties with Jacorey Warrick as well as be the top punt returner and run back two for scores (nope, but he will in the future).

(9) Neither D’Onta Foreman nor Chris Warren III will top 1,000 yards. (OK, so I was right about Warren. Do I get half-credit? Probably not as Foreman went over 2,000 yards. Didn’t see that coming at all.)

(10) I also predicted that both would miss time with injuries (hey, Warren missed eight games and Foreman one), but Foreman will run for 920 yards and seven scores. I was thinking “Price Is Right” and didn’t want go over. Foreman went way over with 2,028 yards and 15 scores and could have had more but for a goal-line strip in Lubbock and another against TCU among his six fumbles. I pegged Warren for 764 yards (366) and four (three) TDs.

(12) Foreman will turn pro early. This was a no-brainer.

(13) Tight end Caleb Bluiett will surprise (yes, in reverse) and have 32 catches for 157 yards and two scores. Try two catches for 11 yards. How did I not know Sterlin Gilbert hated tight ends?

(14) Guard Kent Perkins will have a dominant year and become the first Longhorns offensive lineman drafted by an NFL team since 2008. He was more decent than dominant, but he made a second-team All-Big 12 selection. I still think he’ll get his name called.

(16) Defensive end Charles Omenihu will lead the team in sacks with eight. (He tied for third, with 3 1/2.)

(17) Naashon Hughes and Breckyn Hager will each have six. Hager actually led the team with six; Hughes had 3 1/2. Hager and Malcolm Roach were terrific.

(18) Defensive tackle Paul Boyette will lead up front with 10 tackles for a loss (5 1/2, but played well), and Chris Nelson (six TFLs) will be instrumental.

(19) Gerald Wilbon will have the best season among the freshmen defensive tackles. He’ll have seven tackles for a loss. (I’d go with Jordan Elliott, who had 1 1/2 but the biggest upside.)

(23) Anthony Wheeler will have a terrific year with 74 stops. (He did, leading the team in tackles with 65.)

(24) Dylan Haines will have three more interceptions to give him 12 in his career, but Brandon Jones will replace him after the OU game. (Haines may bring out the haters on Twitter, but he continued his amazing string of picks with four and finished with 13, tied for fifth most in school history. He never got replaced.)

(25) P.J. Locke III will step in at nickel back and make a name for himself. (He nailed down that job and was terrific with two interceptions, six passes broken up and 33 tackles.)

(26) Holton Hill and Davante Davis will both make All-Big 12 cornerbacks and combine for five picks. (Total whiff job by me and them as they both disappeared and had zero interceptions.)

(27) New kicker Trent Domingue will make 17 of 21 field goals (try 15 of 22) with a long of 48 yards (43), will win a game with a field goal (yep, a winning 39-yarder to beat Baylor) but also miss a critical kick (or two, with huge misses against Kansas State as well as Kansas and TCU and got replaced by Mitchell Becker).

(28) Michael Dickson will be the All-Big 12 punter. He was and also an All-American and a Ray Guy finalist as well. He was a stud.

(29) Other All-Big 12 picks will be Williams, Foreman, Burt, Jefferson, Hill and Davis. (Only Dickson, Williams and Foreman made it.)

(30) Texas will lose a heart-breaker to Notre Dame. (Nope, it was the Irish hearts that were broken in double overtime. Texas’ broken hearts came later.)

(31) The Longhorns will fall to Oklahoma State, Oklahoma, TCU and Texas Tech, but beat Baylor, finish 7-5 and play Georgia in the Liberty Bowl. (Texas did lose to OSU, OU, TCU and almost Texas Tech. Texas did beat Baylor as prophesied, but I didn’t see the loss to Kansas coming or a 5-7 record that ultimately cost Charlie Strong his job.)

The only liberty was the freedom from a season gone wrong.