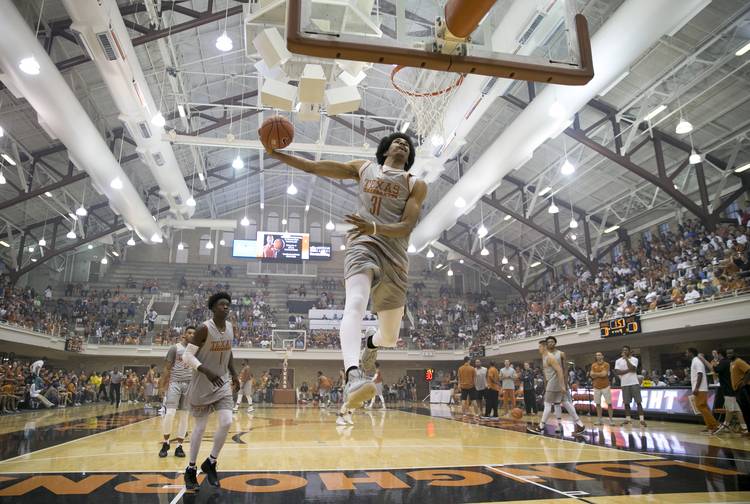 This time last year, Jarrett Allen was the Shaq of the Southwest Preparatory Conference. A big man putting up big numbers for a team that won conference titles.

Now as the center for the Texas Longhorns, Allen is still the big man in the paint, but he is just getting started in his development as a college basketball player.

He’s 12 games into his freshman season and we’re all getting a glimpse of what he will be one day, with the nice inside moves from both hands, an ability to finish strong at the rim, the athleticism to get out on the break for easy buckets, etc.

We can all agree that Allen will play in the NBA one day. Could be next year. Could be 2019.

But this is now, and the Horns (6-6) are in dire need of some Shaq-like production in the paint. While last year’s point guard Isaiah Taylor averaged 25.7 points and 7.3 assists in six games before going down with an undisclosed injury for the Rio Grande Valley Vipers of the NBA Development league, his college coach is finding it difficult to get consistent offensive flow; Texas ranks last among Big 12 teams in scoring (70.2 points), assists (11.5), and field goal percentage (.431).

Allen has an enormous upside, but has been put in the tough position of having to produce big for an offense that’s struggling. He dominated in spots during Wednesday night’s loss to Kent State, particularly in the second half, but becoming the centerpiece is a role he has to mature into.

“I’m going to have to command the ball more in those situations,” he said. “I was just dominating the second half. I will have to do that more.”

The question is this: is Allen ready to be that Alpha Dog?

“Not yet, but I think he can become that,” Smart said. “A couple of months ago he had never played in a game like this, where he had to play this hard and he had to play against a guy who was a senior in college and who was a grown man, leaning on him and going after him on every play. He played pretty well.”

Smart understands he’ll need even more from Allen and his teammates with the money games coming up. Texas, entering Friday’s Big 12 opener against Kansas State and the Horns are still searching for their identity. Point guard is a piecemeal position and there isn’t a pure shooter on the roster.

The good news is Texas has a skilled big man who will continue to develop. If the Horns expect to return to the Big Dance, it will all have to go through the 6-foot-11-inch Allen who is off to a nice start in college. So far he’s averaging 1o.7 points and 6.9 rebounds while shooting a very Shaq-like 49 percent from the free throw line. He posted a double-double for the fourth time Wednesday and set a season high in points with 17.

Sure, growing pains are part of the process. Wednesday provided several examples:

Then there was the stuff that lets you know the kid will make a good living playing ball one day:

Here’s the catch-22 for Shaka and Texas fans. Allen could become a monster presence in the lane over the next couple of months, but then just as we’re getting used to him dominating night in and night out, he will be preparing for next summer’s NBA draft.

At this point, Shaka will gladly take a monster over the next 18 Big 12 games, perhaps beyond.

Bohls: I nailed some Texas predictions, but was Trent Domingue-wide on others