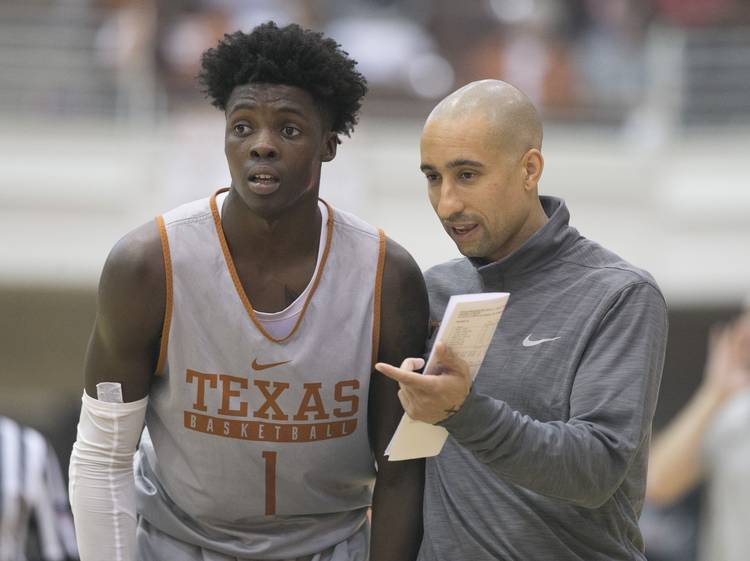 Texas doesn’t have a proven point guard, but one could be emerging. Andrew Jones is far from a finished product, but he’s the pushing the needle in a positive direction.

Want to know the first rule of Point Guard 101? It’s treating the ball like a family heirloom that bounces: Treat it well and don’t allow outsiders to get their hands on it.

From first glance, Jones wasn’t the star of Wednesday night’s 82-79 win over Oklahoma State — Tevin Mack and Eric Davis took top billing — but the freshman put up one of the most effective 2-for-11 performances you will see in a win.

Jones couldn’t buy a bucket, but played the type of floor game that has to have his head coach feeling better about things as the Horns attempt to put some distance between themselves and a .500 record.

It wasn’t squeaky clean, but it was a step in the right direction.

Jones played perhaps his cleanest game of his career in the 82-79 win. Those two assists won’t have T.J. Ford worried about getting passed up on UT’s career dish list, but the most important number in Jones’ stat line would make any proficient point smile: Zero turnovers.

That works all day, every day and a few dozen times on Sunday. That’s a nice piece of work for 28 minutes. Jones bounced back nicely after committing a season-high seven turnovers in a brutal 63-58 home loss to Kent State, something Smart described as part of the ups and downs that come with being a freshman.

He was much better Wednesday at choosing his spots and not taking unnecessary chances. Jones, who’s averaging 9.4 points a game and is second on the team in assists and steals, reached double digits in scoring for the sixth time in 14 games. Freshman post Jarrett Allen wasn’t the focal point of the offense, but you could see some nice chemistry start to develop with his classmate Jones, particularly when they executed some nice screen rolls from the top of the key.

“I thought he really helped us,” Smart said. “We know we were going to need multiple ballhandling against Oklahoma State because they really pressure the ball in the half court and they extend their defense. He did a good job. He was steadier tonight. He just has to continue to get better and better with his ball handling and getting extra work in.”

Learning the point guard position after being a two-guard for most of your life is a process that can sometimes be painful, especially in a tough conference like the Big 12. But Jones is starting to grow into the gig. He’s not a pure lead guard like Ford or Isaiah Taylor, but nights like Wednesday — assuming more shots fall — will keep those minutes coming.

“Our strength coach always tells Andrew that the ball is gold, so you have to value it like it’s gold,” Mack said. “Don’t lose it because we have to keep control of the ball. If we have the ball in our hands, we have to get it up for a good shot. It was huge for him. He’s going to keep getting better, and it was a really good step for him.”

It helped that Oklahoma State, which entered the night ranked third in the country in forced turnovers at 19.7 per game, was whistled for seven fouls within the first four minutes, which obviously took away some of the team’s aggressiveness on the defensive end. As a result, the Horns were able to settle into their offense and get out and run. And that led to some welcome easy buckets in transition, mostly by Mack, who has morphed into an attacker of the basket after being a one-trick pony content to launch bombs from behind the three-point line his freshman year.

A more free-flowing attack will create more easy opportunities, that is if the Horns and Jones continue to value possessions. Shaka will take 11 turnovers in 40 minutes any day of the week. Getting to 7-7 and, more important, 1-1 in conference play is also a pressure reliever.

Jones isn’t being asked to shoulder the load at the position as teammates Eric Davis and Kerwin Roach have taken turns running the offense. That said, he seems to be the most comfortable bringing the ball down and has a natural knack for getting into the paint and getting others involved.

Wednesday was a nice step in his progression.

Bohls: Tom Herman is assembling an ‘army’ of a staff at Texas

Bohls: Red McCombs positions himself in Tom Herman’s corner — ‘This guy is the real deal’