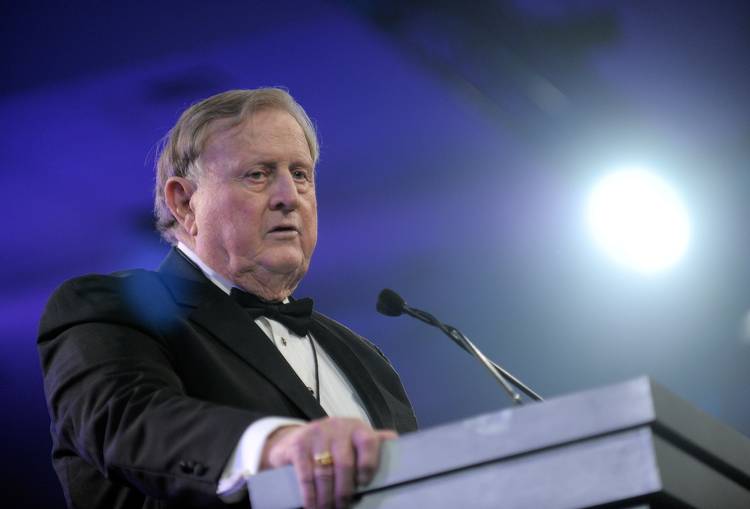 TAMPA, Fla. — The message came up on my phone on Friday as a missed call, and the name gave me pause.

“Red McCombs wants you to call him.”

We’d been down this road before, but when one of the biggest Longhorns benefactors talks, you’d better listen. This time, though, the high-profile Texas man wanted to brag on the Longhorns’ latest hire publicly.

McCombs, whose name graces buildings on the UT campus from the business school to the softball stadium, couldn’t stop raving about Tom Herman, who went 22-4 at Houston and was hired as Texas’ new football coach in the wee hours after the Longhorns lost to TCU in the season finale.

“I know Tom by reputation, and spoke to him this morning. This guy is the real deal,” McCombs said. “If you list his 10 greatest qualities, coaching might be No. 7 or 8. His greatest is recognizing talent. The second one is recognizing the enemy and what it takes to beat him. There are some guys out there we know are winners because we’ve played them and gotten our ass beat the last two years.”

He didn’t want to make waves, but couldn’t resist expounding upon the distinction between Herman and his predecessor, who was fired after three consecutive losing seasons at Texas.

“There are guys who are great position coaches, and you wonder why they never made a great coach,” McCombs said in thinly veiled remarks. “Some coaches who do well at one place, then flame out and you never hear from ’em any more.”

McCombs, as everyone remembers, wasn’t exactly in Charlie Strong’s corner at the outset in 2014 when Texas hired an African-American as its football coach for the first time in the school’s history. Strong, he said at the time, might make a good position coach or maybe a coordinator, and the bell was sounded that perhaps the former Louisville coach who had so much success there might face racial obstacles in Austin.

I never felt that was true. Oh, some didn’t want Strong in the first place, but most in power and the powerful back rooms championed the hire as progress for a school that for a long, long time hadn’t been a friendly place for blacks.

McCombs’ stinging rebuke of Strong had legs like no one could imagine. National perspective read the lines, read between the lines and then re-read them over and over, suggesting his attitude reflected a broad fanbase. That stance shook Strong and never truly went away although McCombs said the two had a healthy relationship, despite those major early reservations.

Asked Friday his thoughts on those caustic comments three years ago, McCombs said, “I did regret ’em, but sometimes people can’t live with the truth, and you’re better off keeping your mouth shut. Charlie’s as nice a guy as you ever wanted to meet. But he was lost. Suddenly he’s in the oven, and it didn’t come together.”

He said he wishes Strong well and hopes he succeeds in his new job with South Florida.

“He tried hard, but it wasn’t there,” McCombs said. “It just didn’t fit, and he had to be frustrated out of his head. You got to have confidence when you step into that ring. It’s like being in Madison Square Garden and the whole world is looking at you. I tried to get the powers-to-be to have mercy on him after two years. That was like me running NASA.”

“Honest to God, I’m not trying to put him on the spot,” he said. “I think he can win any game he enters. I do think the powers that be are going to have to spend some money. I think we’re going to have good times. I’m stirred up.”

And he couldn’t resist one last zinger.

“We’ll be back in that circle of the top five or six teams in the country soon,” McCombs said. “It won’t take long. I think Tom will blow the lid off it. In 10 years, we’ll get an awful lot out of him. And after Major Applewhite does the same thing at Houston, then we’ll get him.”

Golden: If Andrew Jones keeps this up, the Texas men may have found their point guard

Bohls: Charlie Strong sounds happy, and why not? He’s back home at South Florida