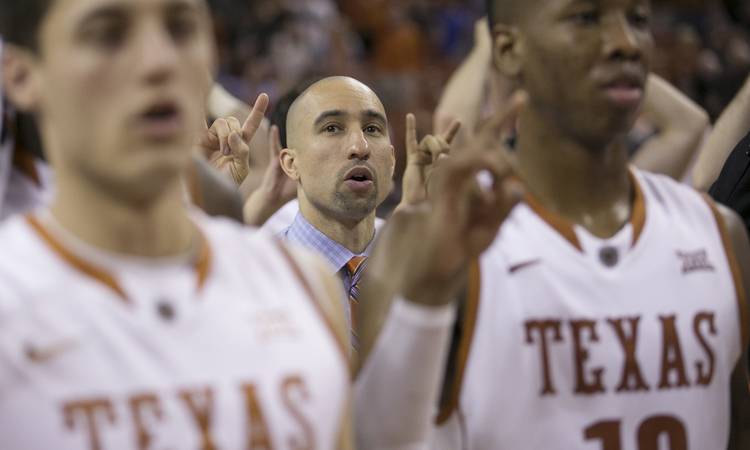 Shaka Smart’s ship is taking on water and the money games haven’t even started yet.

But they’re coming up.

Smart’s Texas men are in big trouble with the Big 12’s biggest icebergs are coming up on the schedule — No. 10 West Virginia at home on Saturday, followed by road trips to No. 1 Baylor and No. 2 Kansas.

As if that weren’t enough, Smart suspended leading scorer Tevin Mack for a violation of team rules on Thursday, one day after Mack and teammate Kerwin Roach were spotted yelling at one another in the aftermath of Wednesday night’s 64-61 loss to TCU. With Texas needing three points to tie in the closing seconds, Roach took an ill-advised dribble instead of passing up the court to Mack, who was ready to hoist a desperation tying attempt.

That play didn’t get Texas beat, and the reasons for Mack’s second suspension of the season are much deeper than an isolated incident at the end of one game.

“We have a set of standards that we expect people in our program to adhere to. Tevin has failed to reach them,” Smart said in a statement.

Now the Horns sit at 7-9 overall and 1-3 in conference play with a monster of a schedule coming up.

Coaches love to use the we-have-to-play-them-one-game-at-a-time line, but most of them aren’t unlike any of us who take a long look at the schedule in the preseason and gauge how many wins are possible. Shaka certainly knew before the season that he had to hold serve at home against Oklahoma State and TCU early on because what awaited after those was easily the toughest three-game slate of any team in America.

Didn’t work out that way.

Shaka’s reality is one of a coach whose team has mastered the art of coming up short. Not of getting blown out, but coming up short. For the third time in five games, the Horns lost by five points or less. The frustration is starting to show.

“I think it’s a test,” Smart said. “It’s a real test or challenge for everyone in our program, me included. The question is what are you going to do next and how will you respond?”

Smart hates the word “rebuilding,” but if this isn’t a rebuild then I don’t know the definition. His best players are freshmen and sophomores and the most talented — center Jarrett Allen — is progressing to the point where he’s likely to become the first UT freshmen since Myles Turner to leave for the pros after his freshman season.

During an on-court promotion during a timeout at Wednesday’s Texas-TCU game, a fan was right on the money when asked this question: Which Big 12 school is the southernmost located?

That fan walked away with some goodies, but being southernmost in the conference standings isn’t something the basketball teams aspires to, even though recent events point to Texas heading that way very soon if things don’t change. College basketball analyst Ken Pomeroy picked the Horns to finish 1-17 in the Big 12 before the season started, suggesting with his numbers that UT would be simply overrun by teams in arguably the best conference in the country.

Well, the Horns have started 1-3 out of the gate, a record that could easily be 1-6 by this time next week after the Mountaineers, Bears and Jayhawks games.

There are 14 games left in the regular season. Things are reaching critical mass over at Denton-Cooley.

Smart’s not one to panic, though his record indicates these kinds of struggles are new to him as a head coach. Going back to his first year at VCU in 2009, Smart’s teams have won at least 11 conference games every season; last year, Texas started Big 12 play 1-2 but ended up finishing 11-7.

This team doesn’t have the look of a group that’s ready to go 10-4. With only seven scholarship players available for the West Virginia game, not including injured players Kendal Yancy and Mo Isom, Smart is facing his toughest coaching challenge to date.

“Basketball is not a perfect game,” he said. “We have to be about lifting each other up. It’s time to learn that lesson and not forget it.”

The Horns will lose more games to better, deeper, more experienced teams, and Shaka understands that. He just has to make sure he doesn’t lose the locker room in the process.

Bohls: Charlie Strong sounds happy, and why not? He’s back home at South Florida

Bohls: Texas’ Joyner Holmes does impersonations of superstars, good ones