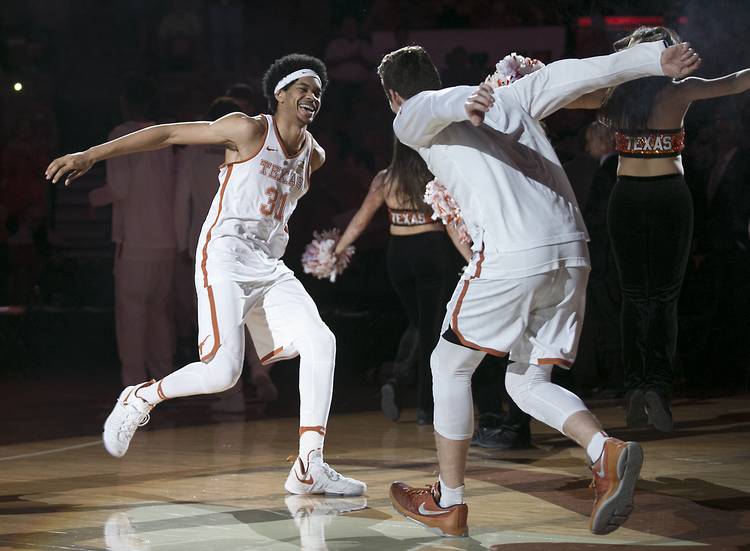 Texas forward Jarrett Allen is introduced to start the game against Kent State during a non-conference game Tuesday night December 27, 2016, at the Erwin Center. RALPH BARRERA/AMERICAN-STATESMAN

Especially off the court.

On it, he’s a rising star, Texas’ 6-foot-11 freshman forward who wowed ‘em at Kansas and who faces a lifetime decision about the NBA in the next few months.

Allen’s the center of attention from many.

Off it, not so much.

He’s not a voracious social media animal. In fact, he’s the antithesis. Take his Twitter account. He’s had exactly seven tweets since his freshman season began in early November. That’s a day’s worth for some athletes. Or presidents. Oh, and one of the tweets was wishing everyone a merry Christmas. He’s not exactly the Antonio Brown of social media.

He’s a regular guy with his teammates but is just as comfortable being alone as he is in a pack. “He’s never in a rush,” school publicist Scott McConnell said. “He’s got some old soul to him.”

How many 18-year-olds can identify with the steely-eyed Rod Serling and relish binge-watching “The Twilight Zone,” the popular sci-fi television series with macabre endings that aired, oh, four decades before he was born? He’s been hooked since he was 10 and now watches those TV marathons on New Year’s Eve and the Fourth of July. “I just love sci-fi and those twists at the end,” Allen said. “Like the one where the aliens were eating people, and the ending was that it was a cookbook (with humans as the main course). My teammates know it’s one of my quirks.”

Another is his love of the action-adventure video game “The Legend of Zelda”, which was originally introduced in, uh, 1986. He’s cut back a little and now only plays it five days a week. “I’m not at the highest level,” he said.

He’s a bit of a nerd, but has a dry sense of humor. Like the time Shaka Smart walked into the weight room on a Monday, which in the coach’s one core-value emphasis a day highlights the virtue of Appreciation, spotted Allen and immediately went into his rah-rah speech to motivate his freshman. Allen dryly noted Smart’s passion, then corrected, “Coach, that’s for tomorrow.” Tomorrow was Enthusiasm Day.

Every day is Enthusiasm Day when Jarrett Allen’s on your team. And those days could be numbered since the power forward, who’s actually more a slender, finesse forward, will have a tough NBA decision to make after this cursed 8-12 season that got only slightly better when the Longhorns finally finished on the right end of the score in Monday night’s nail-biter against Oklahoma.

Allen’s not ready for the NBA, of course. But that never matters. That league drafts for potential, for raw ability, for projects that can return dividends down the road.

Of course, this is a guy who didn’t pick Texas over Kansas and Houston until June and casually left a message for Smart asking if he could check into his dorm room that day. No pomp with him, regardless of circumstance.

Now 20 games into his first season, Allen has shown signs of breaking through, as at venerable Allen Fieldhouse last weekend when he wowed Kansas’ slack-jawed fans with a career-high, 22-point, 19-rebound performance.

“The toughest decision for him is, ‘Do I come out now, get drafted between 15 and 25 in the first round and probably spend some time in the D League, or stay in school, continue to improve and be a top 5-8 pick a year from now when the draft isn’t as deep?’” ESPN basketball analyst Fran Fraschilla said. “If he goes now, he goes to a playoff team, and his development will be slowed in terms of playing time. He’s what we call an intriguing prospect.”

So intriguing that he’s listed anywhere from the 17th pick of the June draft to 28th to nowhere at all. One mock draft listed him as Utah’s 24th pick and called him “underwhelming.” Another raved about his “fluidity” and “cerebral” nation, but wondered about his lack of low post moves.

Smart sat down with Allen in the preseason and asked him what he wanted out of his freshman year.

“He told me, ‘I want to have the best freshman year I can have,’” Smart said. “He’s extremely honest. He’s so focused on what he’s doing. He’s the best in-the-moment player I’ve ever been around.”

Smart clearly isn’t sure there will be a sophomore season. If there isn’t, Allen would become the first one-and-done player in his coaching career, something that could become a fact of life if Smart continues to bang on the doors of McDonald’s All-Americans.

By any measurement, Allen’s starting to get it. He’s becoming more assertive and learning when to flash, how to pass out of double teams, where to look for the ball and how to deal with the physical nature of the game. “In high school, you could just back down players,” he said. “In college, you have to put a move on somebody.”

He’s developing those. Like his nice pick ’n’ pop, which is the extent of his shooting range although he’s still gunning for that first three after four errant tries. He had a reverse dunk and a ferocious rebound against the Sooners that revealed a glimpse of his skills.

“Jarrett is a quick learner,” said UT assistant Darrin Horn, who tutors the Longhorns’ big men. “He’s really improved his motor. But as gifted as he is, he’s got great humility and is very coachable.”

OK, he’s different. Good different from his puffy, old-school Afro to his interest in computer science. He’s so serious about his craft — and his classwork, producing the highest GPA (3.89) on the team last fall — that he studies extra tape and stays for extra shots to increase his range.

Smart knows what he has and what he’d love to keep. Allen’s working without the benefit of a true point guard, one that could reward him with easy buckets, or scary shooters on the perimeter who could ease the attention on him and Shaq Cleare down low.

So does the arrival of four-star point guard Matt Coleman next fall factor into his NBA decision?

“It does,” Allen said after several moments of deliberation. “Right now it’s what we’re missing. A true point guard.”

Maybe that will convince him to stay and not follow the lead of one-and-done Myles Turner, who is already performing at a high level with the Indiana Pacers. Turner had a more NBA-ready body frame as well as a solid shooting touch outside. Both could come for Allen.

The offense hardly flows through him. Yet he had a double-double with 10 points and 12 rebounds in an up-and-down game Monday.

“That’s a testament to him,” Smart said.

Bohls: Texas’ Joyner Holmes does impersonations of superstars, good ones