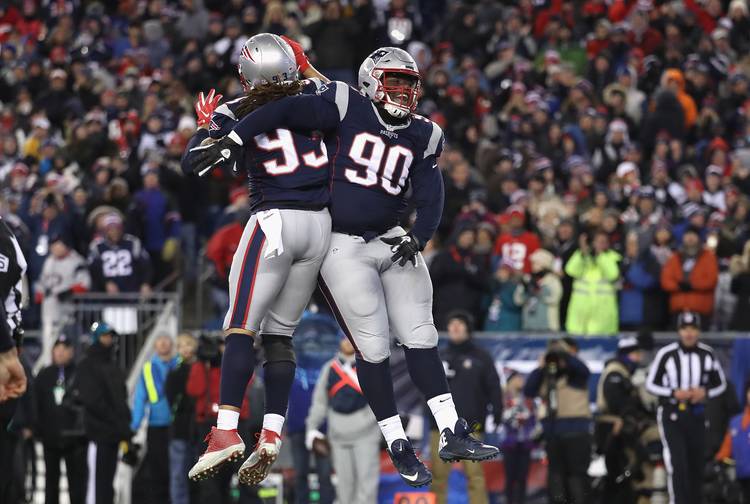 FOXBORO, MA - JANUARY 14: Jabaal Sheard #93 and Malcom Brown #90 of the New England Patriots reacts in the second half against the Houston Texans during the AFC Divisional Playoff Game at Gillette Stadium on January 14, 2017 in Foxboro, Massachusetts. (Photo by Rob Carr/Getty Images)

Who knew he even talked?

The former University of Texas star has been known to do a little a chirping in his first two seasons with the New England Patriots, according to teammate Rob Ninkovich, who informed me of this news at Opening Night at Minute Maid Park on Monday night.

“We couldn’t get him to say three words at Texas,” I told Ninkovich. “What does he say?”

“I did a little trash talking in Austin, but I didn’t say too much too loud,” said Brown, an imposing defensive tackle. “I said what I can when I can and how I can. However I can get it in.”

Brown was known as a quiet guy while with the Longhorns. A married father of two, he wasn’t like many college football players, the ones looking for the next party instead of stopping off for takeout on the way home. He admitted that the decision to turn pro after his junior year was a difficult one for him and his wife, Faith, but it turned out to be the right move.

Balancing football and family is easier after Brown signed a four-year, $7.6 million deal that included a $3.8 million signing bonus.

Now the former Brenham High star is back in his home state to play in the biggest game of his life. He told Kirk Bohls that he had to round up 17 tickets for the game, including one for his mother, Barbara Davis, who has never seen him play in an NFL game in person. She doesn’t fly because of a fear of heights, her son said, but she won’t have to worry about that on Super Sunday.

“It’s good to get back here to be in this heat and get away from the cold for a little bit,” Brown said. “It’s great to be around friends and family.”

Brown started all but one game in the regular season for the league’s stingiest defense, and he finished with three sacks, 50 tackles (24 solo) and his first career safety, which came in a 30-23 victory over Baltimore. His second season has been a nice progression from his first, except for a brief bump in the road on Christmas weekend, when he was benched for the first three quarters against the Jets after being late to a team meeting.

Brown, who turned 23 on Thursday, may not be known for being much of a chatterbox, but he has quietly gotten off to a really nice start in his professional career. After leaving Austin one year early to turn pro, Brown has become a reliable run-stuffer up front while allowing linebackers like Ninkovich and Dont’a Hightower, a first-time Pro Bowl selection, to roam free and make plays in the opponent’s backfield.

Being a first-team All-Big 12 selection helped Brown get noticed at the 2015 NFL rookie scouting combine, but a meeting with Patriots scouts led him to believe the team had no interest in his services.

“The guy was just looking at me and didn’t say much,” he said. “When I left, I was like, ‘I guess I can cross New England off my list.’ ”

Then draft night arrived and the Brown contingent was thrown for a loop when the Patriots selected him with the 32nd overall pick.

“We were at a hotel near (the UT) campus,” Brown recalled, “and the phone rang. My uncle is a huge New England fan and he asked, ‘Is that Belichick?’ ”

It was Belichick, who rarely makes any mistakes in judging talent. Brown landed in a great spot, one a team with great leadership and arguably the best coach in league history. He’s a willing student whom teammates and coaches describe as someone always looking to improve at his craft.

“I learn from everybody,” Brown said. “It doesn’t matter how many years you’ve been in the league. If there’s something I need to know or something they can help me with, I ask them. I don’t have one set mentor, but I like a lot of guys who are contributing to what I do.”

Patriots defensive coordinator Matt Patricia said Brown has made a nice leap from year one to year two, especially in grasping the mental side of the game and embracing film study.

“He understands that when he walks into the building that we’re going to have a lot of questions for him,” Patricia said. “He better know his assignment, what the guys around him are doing and who he’s playing against. So I think he has had to hone in on that. He’s doing well.”

Belichick has mentioned that Brown needs to work on being more consistent in his play, and the big guy certainly is working on it.

He’s just getting started in the NFL, but Brown’s quietly improving and he’ll only get better.

Golden: Recruiting wins are always nice, but for Texas, football wins are better

Bohls: Texas’ Morgan Cooper hopes to ace this next challenge for Longhorns, himself