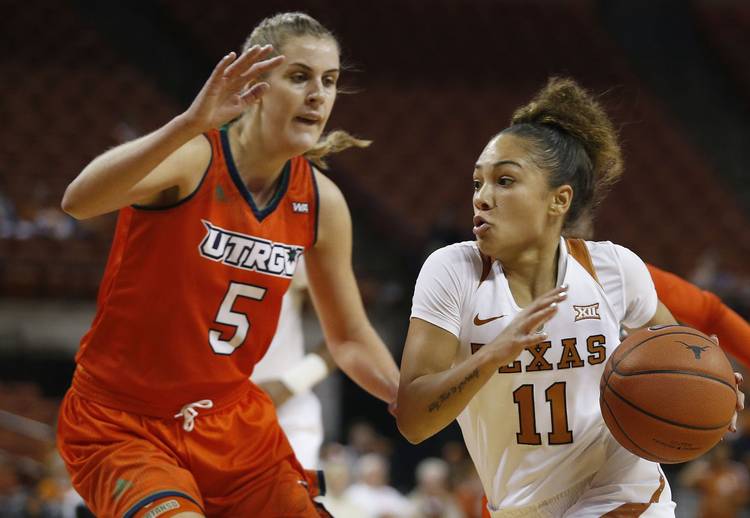 Yeah, McCarty loves power naps and sleeping ranks ahead of some things college kids rarely miss out on like going out or watching television. One of the more popular athletes on campus, McCarty isn’t exactly a sports fanatic. When I asked her if her floater shot came from watching Spurs guard Tony Parker, she said, “I don’t really watch basketball much. I just play.”

What about the Olympics last summer? You didn’t watch the USA basketball teams win gold?

Brooke may not be watching the game but between her marathon shooting sessions in the gym, mall trips and power naps, future opponents shouldn’t make the mistake of sleeping on Texas’ junior point guard who has my vote as the most underrated player in the country.

At 5-foot-4, McCarty is playing a big girl’s game like an Amazon. Just ask Baylor. The League City Clear Springs product gave the nation’s No. 2 team the work Monday night when she torched the Lady Bears for a season-high 22 points in Waco, including a statement 27-foot bomb to beat the first-quarter buzzer. And don’t make the mistake of assuming she’s one-dimensional. McCarty scored 12 points in the paint against a Baylor team that leads the country in blocked shots.

“She’s smart and creative with the ball,” said assistant coach Jamie Carey. “She’s a very bright player who is smart in her movements. She never does the same thing twice.”

With that signature bun bouncing atop her head, McCarty swished a free throw to become the 42nd player in program history to reach 1,000 points scored en route to helping her team improve to 20-4 overall and a sparkling 14-0 in Big 12 play entering Monday night’s non-conference game at No. 5 Florida State.

McCarty is living proof that size doesn’t always matter. Don’t compare her to Muggsy Bogues or Spud Webb because those guys wouldn’t stand a chance against her in a three-point shootout. She has the range of Diana Taurasi, the guts of Allen Iverson, but not the look of a someone whose Hall of Fame assistant coach believes will play well on the next level.

“If anyone sees her outside of a basketball environment,” Thompson said, “they’re kind of thinking like, ‘No way. No way is this cute little thing doing all of these very impressive things on the court.’ I guess her resumé doesn’t necessarily fit the package but she’s incredible in what she’s able to make happen.”

The Longhorns have weapons for days like guard Ariel Atkins, center Kelsey Lang and freshman guard/forward Joyner Holmes but it all centers around the smallest player on the team and perhaps the one with the biggest game. The 21-year-old McCarty never makes excuses for her lack of height and why should she? After all, it’s never stopped her from achieving her goals. Would you be surprised to know her 73 defensive reb0unds rank third on a team with 12 players that stand 5-foot-8 or taller?

“Some people make it a bigger deal than it is,” said McCarty. “I’ve always been the smallest player so it’s nothing new. I’ve always played against people bigger than me so it hasn’t really been a challenge. I’ve been dealing with it all my life so at this point it’s like, either you’re going to play or you’re not.”

She’s playing and slaying. McCarty has improved in every important statistical category, leading Texas in scoring (13.9), assists (3.6), three-point makes (55), three-point percentage (.437) and minutes per game (32.3). As a result, coach Karen Aston’s deepest club has won 18 straight and has the potential finish up in Dallas next month, which would be Texas’ First Final Four since 2003.

After a bout of homesickness as a freshman, McCarty has become what she calls a lead-by-example type of player. And while the transition  from the wing to point guard has been a tough piece of work, her popularity has ascended in the same manner in which her game has evolved. Becoming more vocal on the court is something she admittedly needs to do more of since she’s always the one running the show full-time.

“She’s learned as she’s gone along after a freshman year of not liking any of us (coaches) very much,” Aston said. “She started to understand what it takes to be a really good basketball player at this level and how to practice every day.”

She’s getting there in the communication department, though. The people around her will tell you this Brooke rarely babbles. It doesn’t keep others from talking about her. Aston said she can’t go anywhere without a Texas fan asking about her point guard.

Call her a throwback, if you will. She lives in the gym and seeks the counsel of mom Lisa Garrett, who introduced Brooke to basketball while coaching a Little Dribblers game back in the day.

“If you come to a game, just listen for her voice yelling at me behind the bench,” McCarty said.

So as Texas rolls along, its point guard is quietly impacting the team in ways we haven’t seen since Carey, Stacy Stephens and Tiffany Jackson were playing for Jody Conradt.

“She fears none and respects all,” said women’s athletic director Chris Plonsky.

McCarty won’t say it but she embodies the We-Can-Do-This spirit on this team.

Bohls: Texas’ Morgan Cooper hopes to ace this next challenge for Longhorns, himself