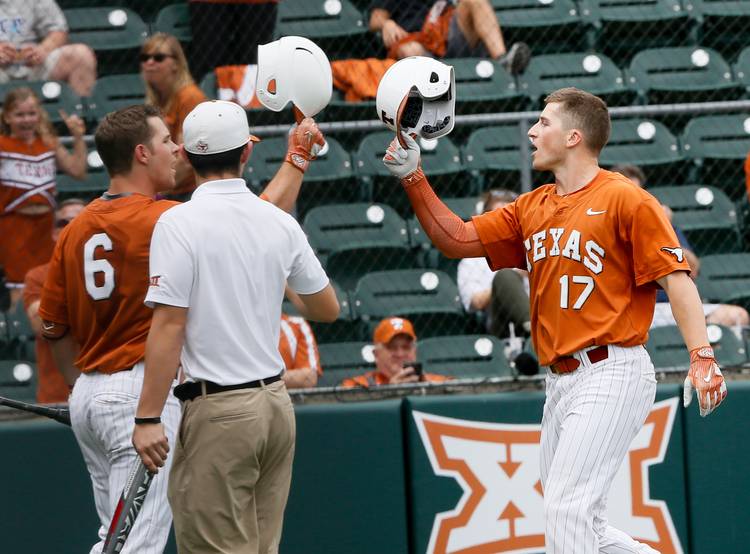 Bret Boswell (17) celebrates home run with Tyler Rand (6) in the final game in a series against the Rice University Owls at the University of Texas' UFCU Disch-Falk Field in Austin, Texas on February 19, 2017 (Andy Nietupski for AMERICAN STATESMAN)

Texas made a believer out of Wayne Graham.

David Pierce’s Longhorns needed four innings to get their first hit of the day — a soft infield single by Kacy Clemens that he legged out ahead of an errant throw — and never came close to solving the breaking balls of the Owl pitchers. Clemens knows he and his teammates need more plate discipline, but he groused that they barely saw a fastball the last two games.

That wasn’t the only factor in their undoing Sunday. A disastrous, five-run, sixth inning by Rice included all manner of Longhorn nightmares like a passed ball, a wild pitch, two hit batters and a pair of two-run doubles pretty much doomed Texas.

Pierce will gladly take four quality starts by all four of his pitchers, including the highly promising Blair Henley, and three errorless games in four by his defense. The Horns were resourceful, giving Pierce his inaugural win when left fielder Travis Jones gunned down the would-be tying Rice run at the plate for the game’s final out.

A split with 23rd-ranked Rice is more than respectable, but Pierce wanted more.

“Defense and pitching have to be there every day,” Pierce said. “I’m very disappointed today. Offensively, we didn’t fight with two strikes. We got to get better there. We won Game 1 of the doubleheader because we put the ball in play and had two great drag bunts. We want to be able to score in multiple ways, and we want to be able to adjust during the game.”

Texas struck out far too much and didn’t get nearly enough quality at-bats up and down the order. But shorter fences and intriguing freshmen like Ryan Reynolds, David Hamilton and Austin Todd offer a lot of hope to a team that hit just .211 in this series.

Graham’s trusting his eyes, though, and predicts big things for the Longhorns. Really big things, and not just because Pierce is a former valued Graham assistant.

How’s that for a stunner out of the blocks? And if they are, the Owls might be there alongside them.

Graham may see more than the announced crowd of 4,658 witnessed because the home team looked very hapless at the plate for much of the afternoon, struck out a disturbing nine times — 30 times in four games — and got the leadoff man on just twice. One came when Boswell went yard, the third Longhorn to do so in four games as he joined the two Clemens boys.

“That’s a pretty good ratio,” said Clemens, Texas’ lone .300 hitter a year ago who has made himself into a feared left-handed hitter with a great stroke. “I wish we’d have had more guys on base when we hit them. But we don’t want to be a home run team. We want to hit line drives in the gap and be productive.”

No one was more productive than Clemens, who had two hits Sunday and a team-high six hits in the series and homered as his brother Kody did on Friday. Mathis, maybe their biggest power guy, struggled with an 0-fer and only two hits in 13 at-bats. Texas will rely on Mathis a ton, and it’s imperative Michael Cantu get his head right and live up to immense expectations for the power-hitting catcher.

“Patrick struggled, trying to do too much,” Pierce said. “He’s a much better hitter when he uses the entire field and hits the balls in the gap. Michael really swung the bat with power coming in. He was swinging the bat as well as anybody and really drove the ball. We’ve got to come up with more clutch hits.”

At least Graham expects them to.

Golden: Just how good are the Texas women, really? We’re about to find out