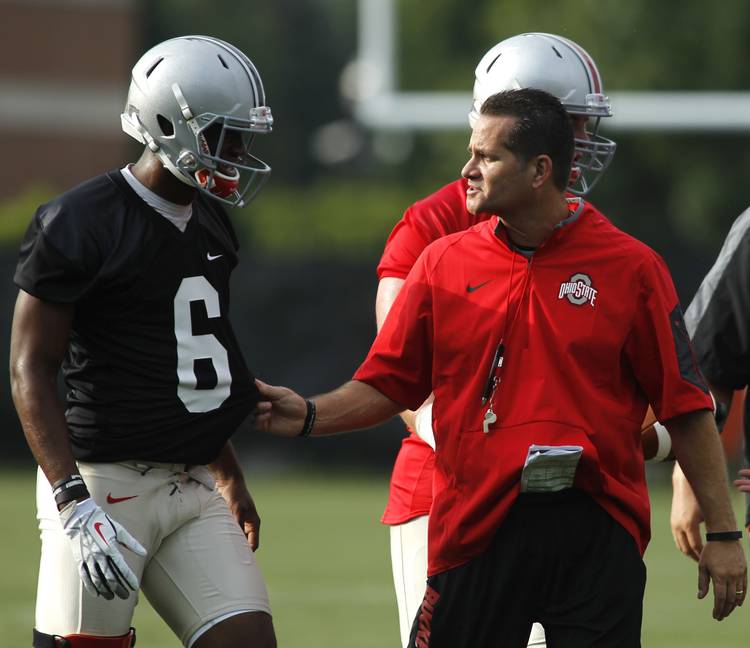 Tim Beck recognizes a hot seat when he sees one.

He’s sat in plenty of them before.

And he’ll be sitting in another one in the Royal-Memorial Stadium press box, come September. Maybe not immediately, but he knows it’ll warm up soon enough. Nature of the beast.

“Yeah, I’m holding the gasoline,” Beck said with a knowing smile at his introductory press conference.

Comes with the elite-franchise territory, he knows. Especially when you’re calling third-down plays at Nebraska or Ohio State. And now at Texas. Three schools with 15 national championships among them.

Beck gets it. So much that he warned his two children about the perils of being the offspring of an offensive coordinator at a blueblood football program like the one he joined in January, when Tom Herman tabbed him to run the Longhorns’ offense.

“When I got into this profession, I sat my kids down and talked to them because when they’re attacking me, they feel they’re attacking their dad,” Beck said. “I remember Wisconsin beat us really bad. A day later, my daughter said, ‘I’m not going to school.’ I said, ‘Get your ass out of bed and get to school.’“

For him, it’s part of the job, one he’s used to. He cited some of Bobby Bowden’s wisdom, noting that there’s only six inches difference between a halo and a noose.

“I block it out,” he said of the criticism. “These are high-pressure jobs, and you’re going to get (heat) when something happens.”

Like the time Nebraska whipped Florida Atlantic by the lopsided margin of 55-7, a game where the Cornhuskers broke a Big Ten modern-day offensive record for yardage that had stood for 122 years. Yet, after his 2014 Nebraska team torched FAU for 498 yards rushing and 784 total yards on 92 plays, he vividly remembers the first question at the post-game press conference.

How, Beck was asked, could he be on the goal-line once and not give the ball to the fullback?

Beck was assured in his first visit with local reporters who cover the Longhorns that he wouldn’t be asked such hard-boiled questions in a rout. At least, not with the first question.

The nearly 51-year-old, rock-jawed Ohio native who grew up in the cradle of coaches at Cardinal Mooney High School in the tough steel-mill town of Youngstown — a place that has produced five major college head coaches, including all three Stoops brothers and Bo Pelini — has been assigned to help fix a Texas program that has suffered three consecutive losing seasons and gone through four offensive coordinators over that time. Interestingly enough, Beck followed one of them, Shawn Watson, as Nebraska’s coordinator before he followed in Herman’s footsteps at Ohio State.

The Texas offense improved remarkably a year ago with a freshman quarterback and a Doak Walker Award-winning tailback, but D’Onta Foreman and his 2,000 yards have vacated the premises.

Shane Buechele, a 12-game starter, returns with a terrific touch on the deep ball, incredible poise and apparently a sprained thumb that’s healing. He’ll do battle with physical Westlake freshman Sam Ehlinger, who will not back down. A slew of talented receivers are on hand as is the bulk of an offensive line paced by All-American tackle Connor Williams. Pieces are in place. Beck must assemble them.

The playbook might not change dramatically. Beck likes to pass — just check out Nebraska’s 2014 Holiday Bowl — but says he prefers a physical offense that wins the line of scrimmage and a quarterback who can run and extend plays. All that is essential if Beck hopes to keep up with the pinball offenses of the Big 12.

“I get it,” said Drew Mehringer, the new receivers coach and passing-game coordinator who came from the other end of the college football spectrum than Beck, with one year at Rutgers. “The Texas Tech-Oklahoma game last year sticks out in my mind. I watched every snap.”

It’ll probably give him nightmares now that he and Beck will be expected to keep up with those prolific offenses. But Mehringer’s got full confidence in Beck. He’s known Beck since he played for Carrollton Turner against Beck’s Mansfield Summit teams.

“They always beat the tar out of us,” Mehringer said.

Beck did that to a lot of teams during his nine seasons as a high school head coach, eight of them in Texas. And that should pay dividends in recruiting. Before his days at Summit, he pulled R.L. Turner out of the doldrums and delivered back-to-back playoff berths for the school for the first time in 35 years.

Two years after succeeding Herman as the Buckeyes’ offensive coordinator, Beck’s now charged with putting behind him Ohio State’s erratic 2016 offensive season that was capped by a humiliating 31-0 shutout by Clemson in the semifinals. Buckeyes quarterback J.T. Barrett didn’t exactly come to Beck’s or co-coordinator Ed Warriner’s defense.

“I don’t know if it was a curse, following Tom, because I got to learn a lot from Urban Meyer, but it was hard to improve on the position,” Beck said. “It was a difficult situation. We didn’t play very well in the last game, but we were 23-2 going into that game. I don’t know if that’s broken necessarily.”

Relatively speaking, it wasn’t. But the Buckeyes had been national champs just two years before with a wealth of quarterbacks and an incomparable running back named Ezekiel Elliott, and expectations hardly diminished even though the NFL draft robbed Ohio State of much premier talent for 2016.

The play-calling duties toggled between Beck and Warriner as well as Meyer with no clear delineation of responsibility. Beck wrestled with the same chain of command at Nebraska with the conservative, defensive-minded Pelini until he cut loose in that Holiday Bowl and had quarterback Tommy Armstrong Jr. throw the ball 51 times in a 45-42 loss to USC. “We already knew we were gone, so we just kind of let it go,” Beck said.

He’ll probably have to rein in any such pass-crazy notions as he deals with another intense, authoritative boss in Herman. But he says he knows Herman’s system well and won’t hesitate to bend his ear for input on game day. He’s got some sore eardrums as reminders.

So which boss chews him out louder — Meyer or Herman?

As he said, it comes with the hot seat.

Before Texas: Has been an offensive coordinator at three previous schools — Missouri State (1998), Nebraska (2011-14) and Ohio State (2015-16), having replaced Tom Herman with the Buckeyes. He also has coached wide receivers at Kansas (2005-07) as well as Nebraska running backs from 2008-10 before becoming the Huskers’ OC. Interestingly, he also replaced Shawn Watson as the Huskers’ OC.

Golden: Just how good are the Texas women, really? We’re about to find out

Golden: Hall-of-Famer Eric Metcalf nearly ended up at The U, not UT