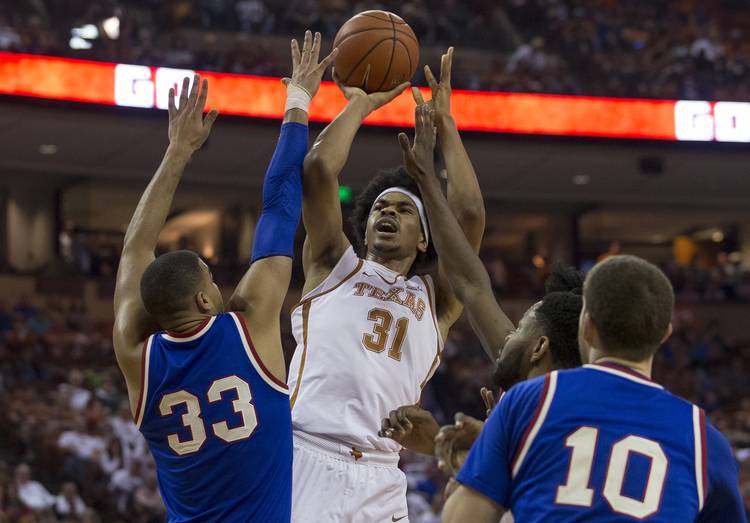 You couldn’t actually see the steam rising out of his freshman ears, but you didn’t have to. He was upset.

So what impressed him about Kansas’ basketball team?

“They’re efficient, and they make plays,” the Longhorn guard said. “But they’re not unbeatable. If we did the little things better on our end and made smarter plays, we could have hung around.”

And is senior Frank Mason, the Jayhawks point guard and the only player in the league to average more than 20 points a game, the best player in the Big 12, Andrew?

If the Texas players are simmering over a Kansas program cementing its mind-boggling, 13th consecutive Big 12 championship, you’d think they should be accustomed to it by now. Maybe not Jones and fellow freshman Jarrett Allen because they’re new here. Of course, who knows if they’ll grow old here and at least become sophomores. They combined for 38 points and 14 rebounds and most of the big plays in Texas’ 77-67 loss Saturday.

But the distance between the Jayhawks and Longhorns at the moment has never been greater. Of course, football national champion Clemson’s 14 wins are one fewer than Texas’ combined football and basketball victories this year.

Kansas is putting the wraps on a 26-3 regular season while Texas stumbles along at 10-19 just a hair away from its first 20-loss season since the Bob Weltlich days of 1983-1984. Bill Self’s team made it 13 straight Big 12 crowns but warned it won’t last forever.

“It is going to happen,” Self said of the day Kansas doesn’t repeat. “We’ve had good players. We’ve been so fortunate injury-wise wise. We’ve got a lot of breaks.”

Like when Kansas hired Self. So can anyone envision a Texas team playing at Kansas’ level.

Shaka Smart pondered the question about his team, which is ranked 72nd by Kenpom.com.

“You can’t always put a timetable on stuff like that,” Smart said. “The reality is we need to take significant steps. Kansas is a cut above. We’ve got a long, long way to get there. In some ways, it feels really far away. In other ways if we can get better in certain areas — I’m not saying we’re Kansas — but we can get much better quicker.”

Yeah certain areas like keeping Allen around, a guy who scored 42 in two games versus the Jayhawks. Like making sure point guard Matt Coleman is as good as advertised. Like developing better shooters on the perimeter. Like hoping Tulane transfer Dylan Osetkowski can bang with the best of them. Like Jones taking the next step.

Asked if Kansas’ run blows his mind, Allen shook his head and said, “It doesn’t really blow your mind. I give them props. But eventually somebody’s gonna take ‘em down.”

At this stage, it looks more like a West Virginia or Baylor or Iowa State will do the taking down than Texas.

Golden: Hall-of-Famer Eric Metcalf nearly ended up at The U, not UT