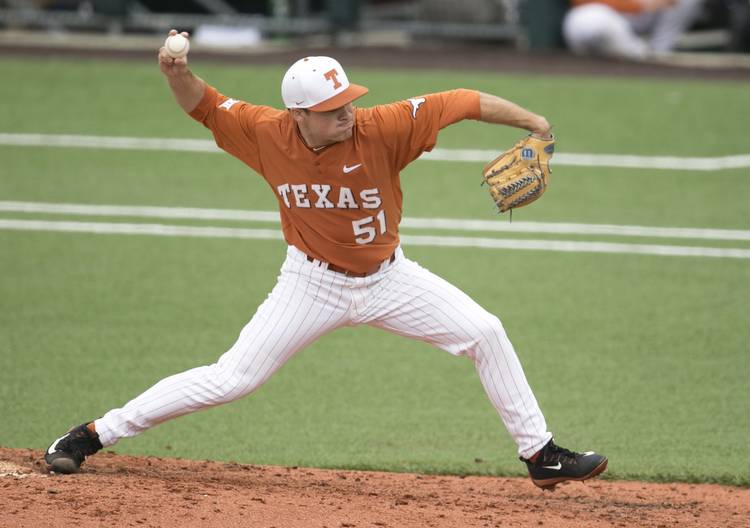 Jake McKenzie is something of a rarity on the Texas pitching staff.

That’s for any number of reasons, chief among them the junior right-hander’s lack of height and velocity and a background mostly as an infielder.

He’s very short at 5-foot-10 although he yearns to be 5-11 and joked that he was listed at 6-foot in the Longhorn baseball media guide last season. “So,” he said, “I guess I’ve shrunk an inch.”

He doesn’t throw all that hard either. To be kind, he’s velocity-challenged but still brags about hitting 90 mph on the radar gun once in high school at Dallas W.T. White. Not that it stopped him from a 19-9 career record with a 1.99 ERA and a no-hitter that included 17 strikeouts.

His teammates razz him all the time about his 84-mph fastball.

“I’m not like Nolan (Kingham) or Chase (Shugart) who throw in the 90s,” McKenzie said of his power arm teammates. “I’ll be sitting in the dugout watching a game, and somebody will say this guy (on the other team) only throws 86 mph. I’ll go, ‘What’s wrong with 86?’ “

Absolutely nothing as McKenzie has shown in his 19 career appearances as a Longhorn pitcher when he wasn’t starting 18 of the last 19 games at second base, and playing six of the nine positions on the field. He was masterful on Sunday with almost five innings of sterling middle relief, the key factor in Texas’ 9-3 win over UConn to take the three-game series.

McKenzie said he had to bug the Longhorn coaching staff about getting a trial on the mound.

“But I’d still like to take batting practice,” mused McKenzie, the team’s only two-way player with a .243 career batting average.

Perhaps but he’s probably sticking to the mound after a brilliant one-hit performance when he retired 13 of the 14 batters he faced. McKenzie (1-0) came on in relief of freshman Blair Henley — who had a rocky start in 2 1/3 rough innings in the only poor outing by a Texas starter in eight games this season — got an inning-ending double play and promptly shut the door on UConn.

“I’d give ‘em an A-plus,” new Texas head coach David Pierce said of his starters, who had all gone at least six innings before Sunday. “But Jake was the player and pitcher of the day. He pretty much held them at bay.”

He did so without benefit of a slider, his go-to pitch in the fall even though it’s eluded him this spring. That’s forced him to rely on a couple of different fastballs. He often throws with a three-quarters delivery and goes over the top when he wants “to heat it up 86.” He also used his own defensive prowess, cleanly fielding four comebackers.

McKenzie was one of 12 total pitchers on the day, five by Texas, as Pierce’s team continues to find its way as an offense. It’ll get tested again this week with a Tuesday game against Lamar before a road series at pitching-centric Stanford, which swept three games from Kansas this weekend.

McKenzie joked about his first 2017 outing that left him with an obscene 54.00 ERA. “I’m glad they didn’t put it on the scoreboard,” he said. “Did I pay someone not to? No, but I would have.”

He lowered it to a respectable 3.60 Sunday after allowing only a single and striking out four with no walks. Expect it to sink further because this is a cerebral kid who takes his smarts to the mound. He graduated third in his class and carries a 3.92 GPA as a petroleum engineering major. Not a perfect 4.00?

“I got four A-minuses,” he groused after never even making a single B in high school.

Little wonder he’s the only Longhorn pitcher allowed to call his own game. But Jake said he’s been doing that since he was 10 or 11.

Texas still strikes out far too much with eight more punchouts Sunday and a whopping 36 in the three-game set with Jim Penders’ Huskies. The Longhorns’ hitting may come around — it’ll need to to save a team that’s hitting a bleak .209 on the year — but until it does, the abundance of arms will carry this club.

McKenzie should figure in prominently.

“I like him in relief,” Pierce said. “I like his calmness. We know we’ll get strikes from him. He was perfect today for four innings.”

He hasn’t abandoned hope of playing some in the field. He played every position last season but catcher, shortstop and first base. He was scheduled to have played first on Saturday, had the game gone into extra innings, and he’s still itching to check ‘em all off his bucket list.

“Next year probably,” he said.

Bohls: Kansas shows Texas has a long way to go