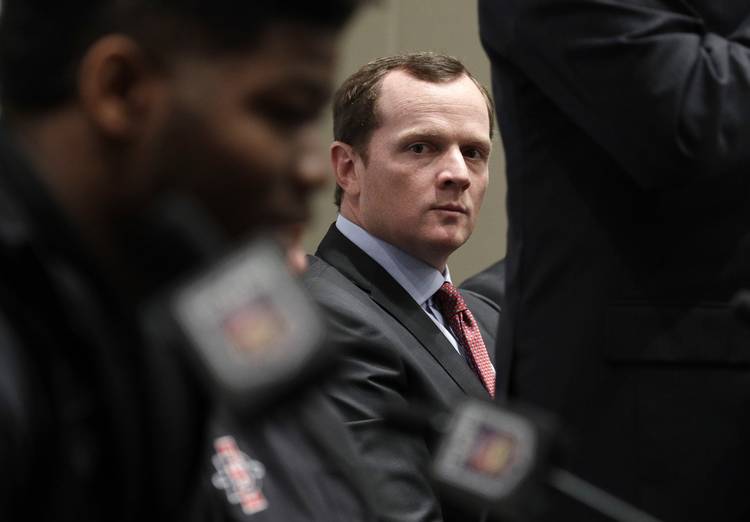 As a head football coach, Major Applewhite is a blank slate. So he set the record straight Wednesday.

Yes, he plans to continue most of the ways of his predecessor, Tom Herman, who left Houston for Texas. What’s he going to change? “Not much,” Applewhite said. “We believe in the same stuff.”

No, he won’t be kissing his Houston players as Herman did. He just smirked when asked.

Yes, he was sore about Herman poaching a trio of three-star UH commitments during recruiting and went “nuclear” in a heated private conversation with Herman, two sources told me, but he’s over it. “When you lose players in the 11th hour, it’s not a good thing,” he said. “Stuff like that, you move on and don’t dwell on it.”

Yes, he remains close to Herman and talks to him about every other week, and did so Tuesday. Asked how he likes being Herman’s landlord at his former three-bedroom home in West Austin, Applewhite said, “It’s easy. The money comes in on time.”

No, he doesn’t really have a firm opinion on the Big 12’s decision not to extend a membership invitation to Houston. “I was in a room, a dark room trying to figure out how to make first downs and touchdowns,” he said.

And, yes, he can ride a horse.

Applewhite’s juggling all kinds of responsibilities, first and foremost those as the new head football coach of the Cougars with spring training starting next week, but even sooner as the parade marshal for the Houston Livestock Show and Rodeo on Saturday morning.

And what all are those duties as parade marshal?

“Just ride a horse and try not to fall off,” he cracked.

Applewhite thinks he’s got that handled. He’s been on horses before.

But he’s in the saddle as a head coach for the first time in his life and has no plans to screw it up. I don’t think he will. He faces all sorts of questions as he takes over for the wildly successful Herman, who won 22 games in two seasons and beat the likes of Oklahoma, Florida State and Louisville, but Applewhite’s as smart and as driven as they come and may be as detailed as Herman if not quite as gregarious.

He said he created a file a few years ago to ready himself for the day this opportunity came and would jot down something as minute as a point that an assistant made in a staff meeting.

“He’ll do outstanding,” Herman said. “Major’s biggest strength is he’s extremely organized and competitive. I think his knowledge of the game is really at a high level. He’s got a tremendous feel for football and the entire scope of the game. Plus he’s very personable.”

While Applewhite’s the boss for the first time at age 38, he has to be one of the most prepared first-time head coaches ever. He’s learned under mentors like Nick Saban, Mack Brown and Herman, who have a combined seven national championship rings among them. He was promoted from UH’s offensive coordinator and “probably” would have followed Herman to Austin had Houston athletic director Hunter Yurachek not elevated him. Major’s smart enough to hire seven assistants with backgrounds in this state.

Applewhite said he has nothing but respect for Herman, under whom he served for two seasons. He admitted he was very upset when Herman swiped three players who had previously been committed to Houston, but said his reaction was more as a competitor than an enemy. The two talk often, as do their wives.

“We kind of hammered those things out,” Herman said of the flap. “That’s water under the bridge. It was good that he and myself could have a mature, grown-man conversation and see each other’s side.”

Don’t expect a game between Houston and Texas anytime soon, although that would have a lot of flavor and Applewhite would be on board. Applewhite does have to work in a new quarterback because fabulous dual-threat weapon Greg Ward Jr. is gone; Texas A&M transfer Kyle Allen still has to fend off rivals like Kyle Postma and D’Eriq King, who are sitting out the spring while recovering from a wrist injury and torn knee cartilage, respectively.

Asked if he’ll change the offense much, Applewhite said, “We’re going to have to. Kyle’s not Greg, who had a different dimension.”

The Cougars may not alter much on defense, just unleash All-American defensive lineman Ed Oliver although they do have to replace a pair of linebackers, a defensive end and a cornerback. But Houston has 15 starters back to deal with a schedule that includes Arizona and Texas Tech.

Applewhite’s ready. But first, he’s on horseback, which is like riding a bike, right?

Golden: Five reasons why Tom Herman will turn Texas around sooner, not later