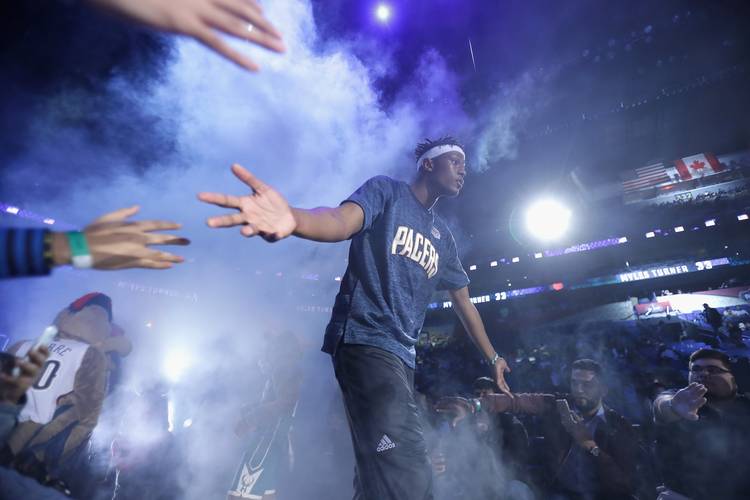 Myles Turner #33 of the Indiana Pacers is introduced prior to the 2017 BBVA Compass Rising Stars Challenge at Smoothie King Center on February 17, 2017 in New Orleans, Louisiana. (Photo by Ronald Martinez/Getty Images)

SAN ANTONIO — Myles Turner was chilling in the visitors locker room at the AT&T Center on Wednesday with teammates Paul George and Al Jefferson prior to a game with the Spurs.

“I love it down here,” Turner said.

“Down here” was a reference to the state of Texas, where Turner was born and bred. Remember the video of the Euless Trinity star famously donning a burnt-orange bucket hat when he announced he was signing with Texas instead of Kansas? It was seen as a coup of sorts for Rick Barnes, who had been searching for the new face of the program.

Things didn’t turn out as either hoped.

The McDonald’s All-American wasn’t great in college, but he was good. He was the Big 12’s freshman of the year in 2015 despite some growing pains on the offensive end. His numbers — 10.1 points, 6.5 rebounds, a Big 12-leading 2.6 blocks and an ugly 27-percent shooting clip from behind the arc — weren’t mind blowing, plus Turner had to deal with the the ups and downs of playing for Barnes, a stern taskmaster if ever there was one.

Barnes loved Turner’s athleticism and natural timing on the defensive end, but was frustrated at times with the freshman’s mental approach.

Turner started only seven games at Texas and never hit a consistent stride. And the end of his freshman year was perhaps the most frustrating. After blocking a season-best six shots in a season-high 33 minutes in an overtime win over Baylor, he averaged less than 15 minutes in the final four games and scored a total of 22 points.

Call it a personality conflict with the coach, or call it whatever, but Turner was more than ready for a change of scenery. Some believed turning pro was premature given the underwhelming college numbers he’d posted, but Pacers president Larry Bird saw enough to take him 11th overall.

So what was the toughest part of that season, Myles?

“Just dealing with the inconsistency,” Turner said. “Some games playing 20 to 25 minutes and other games playing eight or nine minutes. That was hard. You’re the man in high school and everything goes your way and then in college you don’t really get to play through your mistakes.”

Turner believes his Austin experience toughened him for a rookie season in which he missed 22 games after thumb surgery. He ended up starting 30 games and was named to the NBA’s all-rookie second team.

Bird replacing coach Frank Vogel with assistant Nate McMillan has coincided with Turner blossoming into one the league’s rising stars. He opened this season with 30 points and 16 rebounds against Dallas and has scored in double figures in 54 of the 60 games for the 31-30 Pacers, who are in seventh place for one of eight Eastern Conference playoff berths.

The Turner we’re watching now is a player on the verge of stardom. He’s averaging 15.5 points and 7.2 rebounds and is clearly the Pacers’ second option offensively behind all-star Paul George. And he thirsts to get better.

He watched film of Texas ex LaMarcus Aldridge in college and still includes him in his study. He’s still learning to be more patient with the ball like Aldridge, who, despite currently struggling through what he calls the worst shooting slump of his career, always manages to create space for high-percentage looks at the basket.

McMillan wants Turner to continue to work on his movement without the ball, particularly using his 6-11, 243-pound frame to get to the bucket more often. Of note, he has made a respectable 35 of 98 three-pointers this season after attempting only 14 his rookie year.

“They both have the ability to not only play inside but outside,” said McMillan, who coached Aldridge at Portland. “They’re seven-footers that we call lasers shooting the ball. Their work ethic is very similar and both have a good spirit, a good passion for the game.”

On Wednesday, the youngster had the better stats with 16 points, including a late jumper that put the Pacers up by one point late. But the vet got the win after Kawhi Leonard’s jumper sent Indy home with a 100-99 loss. Turner has the growing respect of Spurs coach Gregg Popovich, who marveled at this versatility.

As he continues to blossom, Turner isn’t regretful of how things played out at Texas, choosing to look upon his time in Austin as a learning tool.

“It was a little tough, but it kind of prepared me for the league,” he said. “It let me know I had to wait for my opportunity.”

Golden: Five reasons why Tom Herman will turn Texas around sooner, not later

Golden: For Oscar Giles, coaching at Texas is just like coming home — because it is