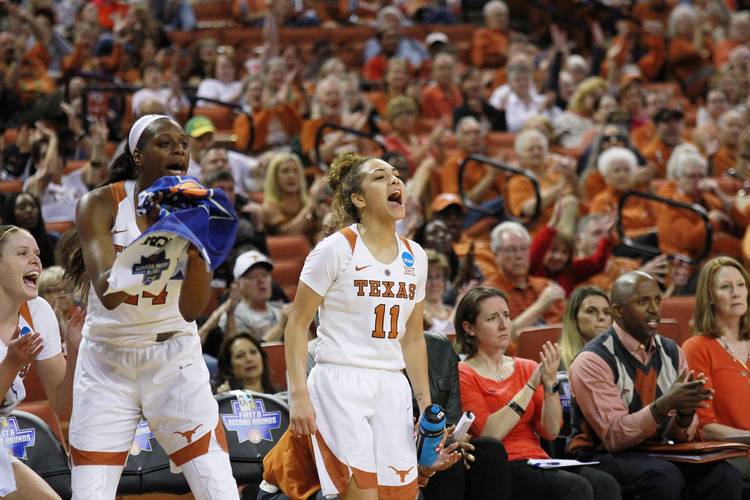 The Texas women’s basketball team dispatched overmatched Central Arkansas in short order, but before Friday afternoon’s game, it was show and tell time.

Prior to the first-round NCAA Tournament game, a prominent visitor to the home locker room at the Erwin Center told the third-seeded Longhorns they can win a national championship. And then showed them a prize that comes with it.

Mack Brown showed off his large gold ring with a diamond-studded “No. 1” framed by an orange stone from Texas’ 2005 football national championship. It opened the Longhorns’ eyes to bright possibilities.

Brown has seen enough of Karen Aston’s team to know it has championship potential, and Texas flashed that potential, at least for a half in the 78-50 dismantling of the Southland Conference champions.

“I told them to play to a standard and make sure you’ve got six games to win a national championship,” Brown said after the game. “You can’t always play great, but you can can play hard every day. They’ve played great. If they continue to play like they have, they have a chance to be as good as anybody.”

Well, most anybody. They played to a standard for a half Saturday, but a half won’t win the whole shebang.

Texas (24-8) isn’t as good as some teams or it wouldn’t be seeded third and it would have held off Baylor for the league championship. It has to be better than sixth-seeded North Carolina State on Sunday just to reach the next level, and then be tough enough to get by probably No. 2 seed Stanford and then No. 1 seed Notre Dame.

Did the team feel it played at a championship level Saturday?

And if Texas hopes to equal or better last year’s Elite Eight run, it will have to up its game considerably. But why not? Last year’s Final Four had all kinds of somebodies or nobodies in seeding terms. Joining every-year champion UConn in last year’s final weekend were Oregon State (a 2 seed), Syracuse (4) and Washington (7).

So why not Texas, even though the Longhorns still look a year away when they’ll have nine McDonald’s All-Americans on the roster.

The Longhorns are clearly much better than a year ago, when they got bounced from the tournament by the Huskies one win shy of the Final Four. They’re improved in every facet of the game and are more athletic, but still have mental lapses and problems with details that create concerns for this post-season.

The Longhorns ended this regular season exactly as they began it — with a 2-4 record against mostly elite teams. In between, they ran off 19 consecutive victories but plateaued when opponents concentrated their defensive efforts on sharp-shooting Big 12 player of the year Brooke McCarty and pressured them into turnovers and a wandering focus.

Aston has complained of those inadequacies all year long and said her players “ebb and flow with their attention,” a characteristic hardly synonymous with championships.

Brown tried to encourage the Longhorns to get past that and connect with their teammates for the greater good.

“I think his overall message was basically to stay in the moment and have fun,” McCarty said. “This NCAA Tournament should be more about the team than yourself.”

For a half, it was. Texas overwhelmed the smaller Sugar Bears who were playing in just the second NCAA post-season game in their history. It didn’t help that point guard Brianna Mullins was whistled for two quick fouls in the first quarter and played just three of the game’s first 20 minutes. Nor were the Bears helped by the Longhorns’ sizable rebounding margin of plus-32, unusual even by Texas’ standards.

“They have all the tools,” Central Arkansas coach Sandra Rushing said. “They’re big. They’re fast. I wouldn’t mind sitting in the stands watching them.”

It didn’t always look good from where Aston sat. She wasn’t mad about the uneven performance that included 21 turnovers and a sloppy third period when her team was outscored by nine points. OK, maybe a little mad.

She emptied her bench early and had nine players on the floor for 16 minutes apiece or longer. Texas’ depth, speed and size simply wore down Central Arkansas and gave it an easy first-round win without being challenged. North Carolina State with an experienced team — it starts four seniors — represents a much bigger test on Sunday.

But it’s all about a standard for Texas and heeding Mack Brown’s advice.

And the ring? Aston didn’t try it on, but did take note.

“It is pretty, though,” she said. “It’s really pretty and shiny.”

Bohls: Confidence? Check. Big 12 cred? Not yet, but Texas baseball is getting closer

Golden: Can Stan Drayton do for Warren, Texas’ backs what he did for Elliott and Hyde?