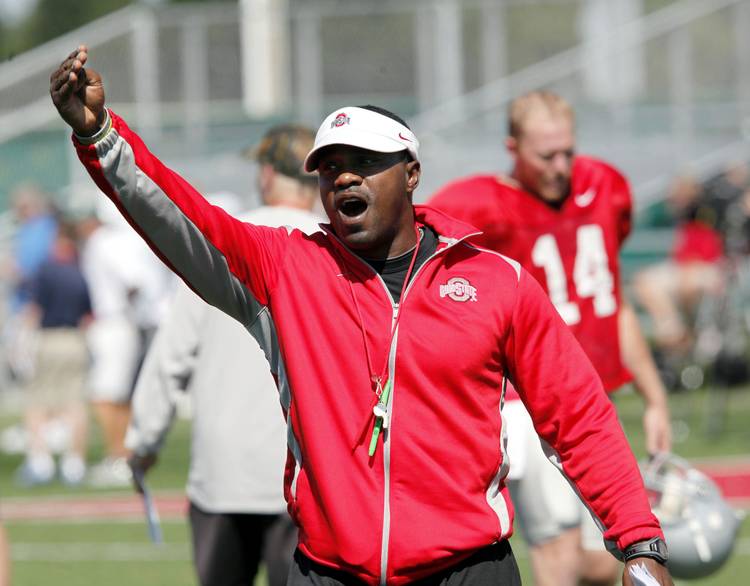 In this Aug. 16, 2011, photo, Ohio State coach Stan Drayton calls out to players during NCAA college football practice in Columbus, Ohio. As college football moves toward an early signing period for recruits, some of this year's signees learned no matter when you sign that national letter of intent, situations can change the very next day.Mike Weber, a running back from Detroit who signed with Ohio State, tweeted "I'm hurt as hell" after it was announced Thursday, Feb. 5, 2015, that Drayton, who had become running backs coach for the team, was leaving for the Chicago Bears. (AP Photo/Terry Gilliam, File)

Stan Drayton is a tough guy coaching a tough game, but mention the relationships he has forged with his players over the years and Texas’ new running backs coach becomes a softy.

Drayton’s a winner, Allegheny College’s star running back in the 1990 Division III national championship season, and later as an assistant coach on national championship teams at Florida and Ohio State. Those accolades aside, he loves the process of developing players just as much. He loves his players even more.

Three months before the Dallas Cowboys drafted him, Elliott stood before the media at the 2016 NFL scouting combine and spoke of his admiration for Drayton, his position coach at Ohio State. Elliott didn’t arrive in Columbus as a can’t-miss NFL prospect in 2013, just another talented four-star back in a room of four-star backs. He needed the type of tough love Drayton had become accustomed to giving in a coaching career that has spanned 25 years.

Elliott didn’t know that Drayton had gone to bat for him with Buckeyes head coach Urban Meyer and offensive coordinator Tom Herman, who had some serious reservations about the caliber of Elliott’s high school competition in Missouri. Once Elliott signed, Drayton challenged him daily on the field and in the film room. It’s football study and a life class wrapped into one.

“He’s really the biggest reason why I’m here today and why I’m the back I am today,” Elliott told reporters at the combine. “He made sure that when I learned this position that I learned it thoroughly, that I learned not just what I do but what the guys around me do. That made me understand the game so much better.”

One year later, Drayton still gets emotional when discussing Elliott’s remarks. Theirs is a relationship that clearly extends beyond the lines.

“You never know what they’re capable of until you consistently back them into the corner,” Drayton said. “You have to make it tough for them every single day. You’ve got to watch them respond and you’ve got to educate them on the response.”

Drayton has long worked behind a coaching philosophy of developing the person first and then the football player. He remains Elliott’s mentor, role model and, most important, his friend. They’re forever linked by the memories they created, a including the 2014 national championship.

Today Elliott doubles as an All-Pro and a walking, talking recruiting tool for high school backs that are considering Texas and playing for Drayton. The coach’s method is tried and true. What worked for Elliott also could work for Chris Warren III or Kirk Johnson or whoever else carries the ball this fall for the Longhorns, who’ll be without the departed D’Onta Foreman and his 2,000 yards.

That is, if they accept those daily challenges he’ll throw their way.

“You have to raise that young man and you have to make sure it’s not all about football,” Drayton said. “You have to develop his mindset as a man. So when Zeke gets up there and speaks of me like he did, it tears me up. It breaks me down.”

Already well-respected for what he had done at Ohio State, developing running backs like Elliott and Carlos Hyde, Drayton was easily one of the most respected running backs coaches in the NFL the past two years. When Pro Football Focus released its 2015 list of the NFL’s top position coaches, Drayton was listed third behind Tampa Bay’s Tim Spencer and Seattle’s Sherman Smith. In 2016, Drayton helped turn Jordan Howard, the Chicago Bears’ fifth-round pick last year, into a 1,300-yard rusher as a rookie after the free agency loss of Matt Forte and the September ankle injury to Jeremy Langford.

Then the call came.

Herman, his old offensive coordinator at Ohio State, wanted him to help out in Austin with this Texas rebuild. Drayton leaped at the opportunity to work with him again.

“It’s something to be said for going to work for a guy that you can absolutely turn your back on and trust him,” Drayton said. “I have no problem bringing my family to a situation where I’m working for a guy that I can trust. I know he cares for my family. Two, he loves kids and knows how to develop young men. He and I share that passion.”

Drayton, 46, told me that today’s college athlete is much harder to reach than the ones that played in our generation. Kids talked and socialized more back then, whereas today’s athlete is less about verbal, face-to-face communication and more about Madden, SnapChat and texting. Breaking through some tough exteriors takes some extra work.

“You have to get out of the building,” he said. “You have go go eat dinner with them. And I have to uncover myself in that respect. As long as they know it’s a two-way street, it’s an easier deal for them to go ahead and open themselves up to you.”

Drayton’s class is now open at Texas. The corner awaits.

Editor’s note: This is the seventh of an occasional series profiling Texas’ new assistant football coaches. Past stories:

Bohls: Mack Brown’s words ring true for the Texas women, who have big goals to go