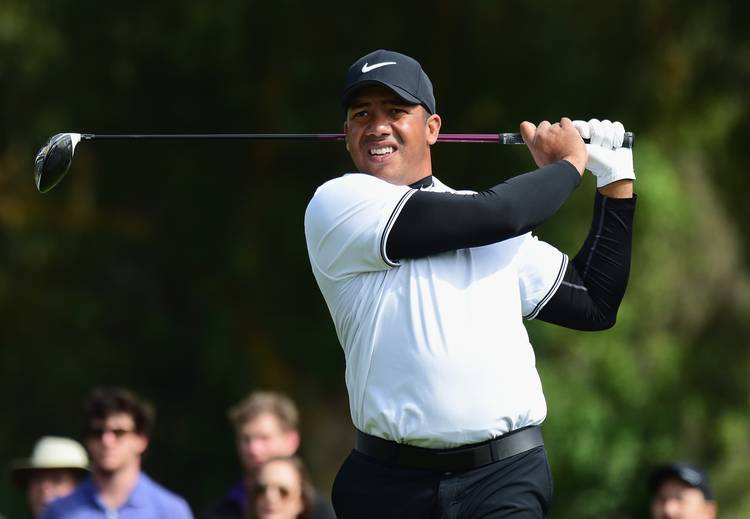 Jhonattan Vegas, seen in a previous tournament, leads the field by one shot heading into the weekend. (Photo by Harry How/Getty Images)

Jhonattan Vegas is back home.

It’s not his native Venezuela, where he grew up as the son of a hard-working father who’d been a caddie and taught his sons the proper way to swing a golf club on a makeshift, 9-hole course built for American oil company workers.

Nor is it Houston, where he arrived as a wide-eyed, burly teenager with little English vocabulary beyond a few curse words and golf lingo and was taken in by a benefactor who opened his home to expatriates of that South American country. That’s also where he’s lived the last eight years with his wife Hildegard and their 1-year-old daughter Sharlene.

But in many ways, he’s back home now.

His adopted home of Austin.

“This is where everything started for me pretty much,” Vegas said.

The 512 is where it will continue this week for the upbeat, charismatic golfer who arrived at the University of Texas more than a decade ago with no grasp of the language, no friends, no knowledge of the city or the school and who returns as a two-time PGA Tour winner and one of the top 64 golfers in the world competing in the World Golf Championships-Dell Technologies Match Play.

The journey toughened him and made the 32-year-old what he is: an accomplished golfer who’s never forgotten his humble roots and those who have helped him along the way. He still gushes over marching in for the Opening Ceremony in Brazil, representing Venezuela in the Olympics golf competition. Didn’t matter he finished 50th. “It’s one of those memories you’ll have the rest of your life,” he said.

“Jhonattan and his brother Julio (who went to UT and is playing on minor tours) are two of the most appreciative, young men. In fact, they are the most appreciative I’ve ever been around,” Longhorn golf coach John Fields said. “They and their family have been true blessings for Texas golf. You cannot help but root for Jhonattan.”

Vegas showed up on Fields’ doorstep as the final signee of the Longhorn golf coach’s recruiting class when another highly ranked player chose Oklahoma State instead. Fields was watching a video of Vegas in his Bellmont Hall office when All-American John Klauk dropped by and instantly marveled at the recruit’s great swing. Vegas signed, picking Texas over Houston, Oklahoma and Washington and giving the Longhorns what Fields called “a massively gifted golfer with length and strength.”

If not for his “Austin parents,” however, Vegas would might not have ended up at Texas. The late Dick Kemp, an Austin real estate businessman, and his wife, Melissa, took him in and became his legal guardians, much like Houston benefactors and outstanding golf coaches Franci Betancourt and Kevin Kirk, who took him under their wing. Vegas still calls Melissa Kemp “my American mom.”

And who wouldn’t want to claim him as their own?

He is as far removed from an entitled athlete as you will find. When Vegas qualified for his first golf tournament as a Texas freshman, he was loaded up with Longhorn gear from clubs to clothes. As he strolled toward the 18th green at Ponte Vedra, Fields noticed Vegas was holding something in his hand. It was his left shoe.

“I saw him limping up the fairway,” Fields said. “He had horrible blisters on his foot and was in serious pain. In his mind, we had given him something, and he wasn’t going to complain. We’d given him new shoes. Whether they fit right or not, it didn’t matter.”

Fields had first caught a glimpse of the youngster with the prodigious power in the stacked Junior World Golf Championships at Torrey Pines in San Diego where Vegas sat in third place. A final round 77 left him in a very spectacular sixth place.

“That was the first time anybody saw him,” Fields said. “I saw this young man who had these physical characteristics that were just sensational. He had a golf swing reminiscent of Tiger and mostly God-given talent.”

Vegas’ long trek began long before on the dusty streets of Maturin in the poor, oil-exporting South America country where there were but a dozen golf courses in a land of now 32 million people. It was there he learned the game despite oppressive, golf-denigrating dictator Hugo Chavez before departing for the United States with no suitcase and little more than a quest for a better life and a passion for golf.

While he didn’t set himself apart in a solid four years as a Longhorn, the odds against him were huge. Fields said he “helped an otherwise mediocre team play well enough at the NCAAs” and Vegas then reached the semifinals of the U.S. Amateur. Years later, he told Fields to imagine that the golf coach “had been dropped off at a university in China and didn’t know the language and had to get good grades and be successful in golf.” That registered with Fields.

Vegas has learned the lay of the land on the PGA Tour in quick fashion. He won the 2011 Bob Hope Classic in just his second start as a PGA rookie. He followed that up with a 2016 win in the Canadian Open, tied for fourth at the Honda Classic last month where he scored the second ace of his career and now finds himself back in Austin as an accomplished pro, ranked 59th among the top 64 in the world right alongside the Dustin Johnsons and Jason Days of the Tour.

“My game’s better than ever, in the sense that I’m a much more mature player,” he said. “I know my game more, and I’ve been working on things that needed improving the most.”

Like his short game, the one aspect that’s held him back. He currently ranks just 181st in putting.

But he’s positively thrilled to be back in the city of his humble origins. What’s he missed?

“Man, everything about it, to be honest,” he said. “The lakes. Downtown. The town itself. It’s such a cool town. Everything makes it phenomenal.”

He’s had this date circled forever. He was watching Day win the first Dell event last year when he was competing in Puerto Rico, but he vowed to do everything in his power to qualify this time.

“This has been on my radar pretty bad,” he said. “It’s such a great event, it will be really cool to catch up with familiar faces like my American mom and play in front of a huge home crowd.”

He’ll be playing at the same Austin Country Club, a course he’s played probably 50 times, but not in the last five years.

He may not be the runaway hometown favorite. Jordan Spieth, a two-time major winner who led Texas to a national championship, holds those honors.

Golden: Can Stan Drayton do for Warren, Texas’ backs what he did for Elliott and Hyde?

Golden: Joyner Holmes is still a freshman, but we’re watching her grow with every game