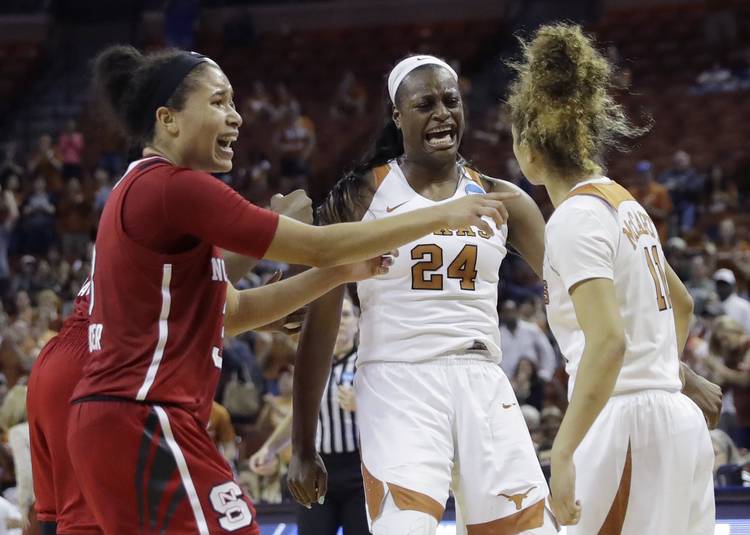 Joyner Holmes will be great one day.

She gave us a glimpse against North Carolina State on Sunday.

The Texas freshman made the two biggest plays of her young career and the Longhorns lived to play another day in the NCAAs.

“Our little ol’ freshman came up big today,” coach Karen Aston said in the locker room following the 84-80 win that put the Horns in their third straight Sweet Sixteen.

When Aston said “big,” she had to mean big on both ends of the court.

Holmes has done most of her damage on on the offensive end this season, and her put-back clinched the victory. But the play that was most talked about was the offensive charge she drew on the Wolfpack’s Dominique Wilson with eight seconds left.

Holmes won’t be confused with a defensive stopper, but that call — to the consternation of Wolfpack coach Wes Moore, who thought it should have been a three-point play — was the difference in Texas staying home instead of playing for an Elite Eight berth in Lexington on Friday.

“It was probably the first one of her life,” Aston said. “Let’s be real.”

It was the defensive play of the year and an indicator of what kind of player Holmes can be when she figures this thing out fully. She admittedly hit the freshman wall near the end of the regular season, and for those unfamiliar with the phrase, it means after she had played the equivalent of a full high school season, which was around the second half of Big 12 play, she got tired.

Holmes said she can zone out sometimes when things aren’t going well and admitted to not practicing hard when she hit that wall. Over the last couple of weeks, she has listened to her teammates and coaches, who kept telling her that one usually plays in a game like they practice. Her dad also reminded her to go out there and have fun playing the game she loves.

Holmes finished with 16 points and nine rebounds and a very freshman-like five turnovers. But her upside is so immense that the coaches have to take the good with the bad. She leads the team with 90 turnovers, but the ball security will get better as she gets more experience.

It’s all part of being a new fish playing with huge expectations at a program that’s on the rise.

“The roller coaster for a freshman is pretty normal,” Aston said. “I’ve never seen one that doesn’t ride the roller coaster. The thing that I’ve probably been the most impressed with about Joyner is that she has never backed down from the expectations at Texas.

“We haven’t had a power forward since Nneka (Enemkpali ) graduated, really. For her to step in that and take that responsibility, I’ve been impressed with it.”

Sometimes Holmes has to be reminded what needs to be done in tough-love fashion. After she was whistled for traveling in the third quarter, she picked up her third foul and was called over to the side for a quick chat with assistant coach Tina Thompson, who told her in not-so-nice terms to get it together.

“The moral of the conversation was she needed to be herself and to stop thinking, Thompson said. “She’s one of the best players in the country she’s playing loose and playing from her instincts. She’s very instinctive out there, especially at her age and she knows the game of basketball so well. So when she’s reading and kind of playing carefree, she’s pretty tough to stop.”

If Holmes can give this team the type of energy she provided Sunday, the Horns are a real threat to win two in Lexington and make it to the program’s first Final Four since 2003. She’s maturing at the right time of the year. Not one to hold her tongue, she told her senior teammates during one timeout with Texas trailing that the season wasn’t ending Sunday.

“Brianna (Taylor) has had an excellent year and Kelsey Lang has a goal of playing in the WNBA, so I told them we needed to keep this fun going,” she said.

If Sunday is any indication, the fun times will be here for a while as long as Holmes keeps progressing.

Bohls: With a return to the Masters looming, Jordan Spieth is only looking ahead