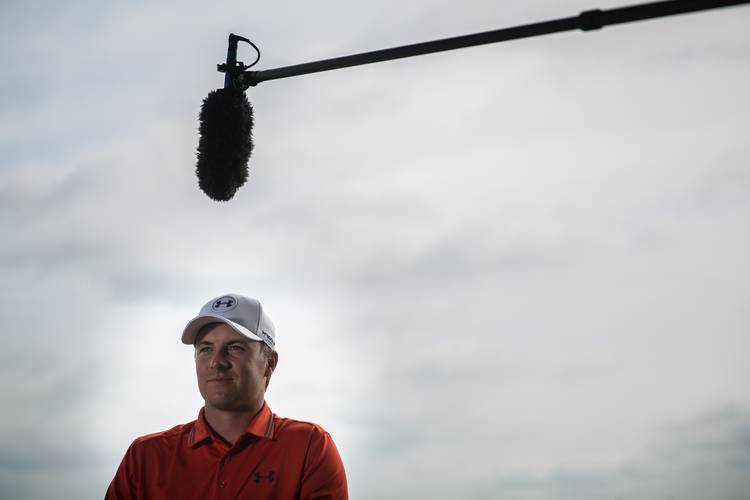 Jordan Spieth is so over it.

Now if only the rest of the civilized world will.

The questions still come as he knows they will. From city to city. From one reporter after another. From inquiring, caring fans.

“Jordan told me he was fine a couple of days after,” said John Fields, his old college coach at Texas. “What was interesting for him was the way people were treating him. He’s won the Masters and been a runner-up twice. That’s a career extraordinaire for anybody. But people were feeling so bad for him, he was at a grocery store the next week, and two older women came up to him and said, ‘Are you OK?’”

Spieth has gotten past his Masters debacle. He’s shelved the memory of his back-nine collapse where he squandered a five-shot lead and lost by three to Danny Willett. He’s put to bed his quadruple bogey on his watery grave at hole No. 12.

He has. Believe him.

Now only if the pesky media and fans will let it go so he can, too. Which is why he cannot wait until the Masters in two short weeks.

The start of the Masters?

OK, so maybe he’s not over it. Not totally. Spieth would be better served with some self-deprecating humor at his own expense because his 2016 Masters will follow him around just like other failures have been attached to Greg Norman and Chris Webber and Pete Carroll at the 1-yard line. Any sports fan immediately understands those humanizing shortcomings. But that’s not Spieth’s serious style.

“It’s not as if it’s going to be the last year he gets questions about it,” Rory McIlroy said on the eve of the WGC-Dell Technologies Match Play. “That might be the way he’s approaching it. But if he doesn’t banish those demons or win this year, the questions will always still be there. I still get questioned about the back nine at Augusta in 2011. It’s just something you have to deal with. It’s something that happened. It’s not going to go away. It’s there, and it always will be.”

But Spieth has something he can hang his confidence on. A green jacket.

“He can console himself by opening up his wardrobe and seeing one hanging there,” McIlroy said.

That said, a new Masters will put more distance between Spieth and collapse. That will undoubtedly bring new questions, a new storyline, a different angle, perhaps all of them positive because, as Dell defending champ Jason Day said, “he’s young enough and talented enough that it won’t even affect him. It’s OK to fail as long as you look at it as a learning experience.”

But Spieth is weary of the constant questions.

“No matter what happens at this year’s Masters, whether I can grab the jacket back or I miss the cut or I finish 30th, it will be nice having this Masters go by,” Spieth said. “The Masters lives on for a year. And it will be nice once this year’s finished, from my point of view, to be brutally honest with you.”

So he is over it. He’s just not over being asked about it, which is what irritates him. And with good reason, mainly because the inference that Spieth maybe isn’t championship-material. The entire world knows that he is. Further evidence are his three victories in the Colonial just three weeks after the Masters and then the Australian Open and Pebble Beach.

As for the Masters, consider that he’s played the event only three times. Three very historic times.

“People forgot that I won it in 2015 — or they seemed to,” Spieth said privately later. “I feel I’ve been very successful on that golf course. The way the questions are phrased in a way makes me wonder sometimes. But I’m ready for the next one. That’s my mindset.”

That’s the identical mindset that flushes failure from his psyche, if not instantly, fairly quickly.

Over it? Spieth’s game is back to being over-the-top strong. Never mind his world ranking has slipped to sixth. Some slip. So that’s why the press’s incessant carping over three bad holes in Augusta chaps his butt.

He may be playing better than ever. He’s tinkered some with his putting. And he’s the perfect gentleman on the course, signing autographs constantly and making friends wherever he goes.

Willett, who benefited from Spieth’s woes, said he was impressed with how Spieth handled the loss.

“He really is one of the classiest guys out there in terms of that, especially at his age. It’s quite astounding really, in terms of how well he took it,” Willett said. “It would have affected a few guys but because of the class of guy and class of player, he’s kept moving forward with his game nicely.”

That probably has as much to do with his drive as it does his age. Still four months from his 24th birthday, he may not appreciate that his meltdown will always be part of his story. It just doesn’t need to be the most prominent part of his story like it would Norman, whose epic collapse in 1996 after blowing a six-stroke lead seemed to neuter his two British Open championships. It was one of a staggering eight runner-up finishes in majors for the Great Shark.

But Norman’s still a champion, just not on this side of the pond. Nor should the 2016 Masters define Spieth. It won’t.

Spieth has always had a maturity beyond his years. He’s smart. He gets it. And within him burns a fire that will go unquenched until he wins everything there is to win.

Every golfer loses. Jack Nicklaus won a record 18 majors but was a runner-up in a major an astounding 18 other times. Try walking in Sergio Garcia’s shoes, Jordan. Or Dustin Johnson, the current No. 1 who’s also had his share of misses before breaking through in his 29th major at last year’s U.S. Open.

Asked which of his mishaps in the majors hurt the worst, Johnson said, “All of them.”

Johnson playfully thanked the reporter for, uh, bringing it up. A little humor goes a long way.

“He’s such a competitor,” Fields said of Spieth. “It does not sit right with him when he doesn’t play the type of golf he thinks he should be playing. As he gets older, he’ll probably become more of a realist.”

For now, real to him is winning.

Golden: Joyner Holmes is still a freshman, but we’re watching her grow with every game

Golden: He’s an NFL long shot, but David Ash is back and giving football one last shot