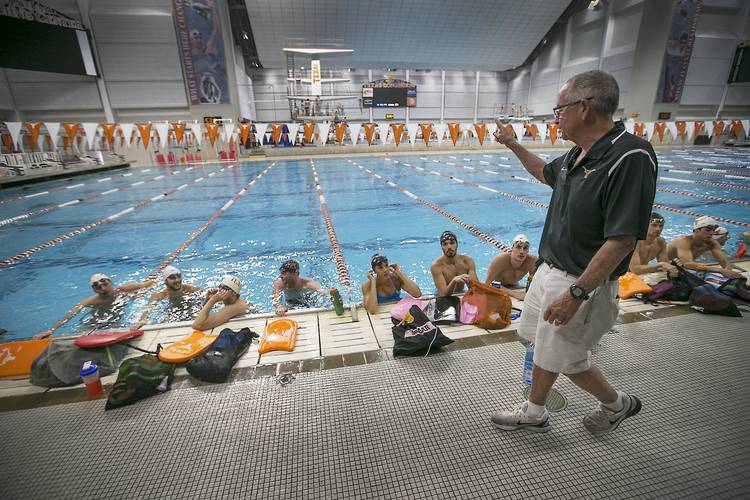 Eddie Reese, head coach of UT men's swimming, talks to some of his swimmers during a recent practice. Ralph Barrera/American-Statesman

Eddie Reese has a contract.

He’s just not sure what’s in it.

“I think it goes through this year,” Reese mused this week. “I’m not sure. It could be more than that.”

And then, the Texas men’s swimming and diving coach added, “You should never get a one-year extension based on what you did five years ago.”

OK, so how about what you’ve done lately.

In Reese’s case, it’s a lot. A helluva lot. He’s been the best coach on the Texas campus for 39 years.

“Oh, he’s the best coach without a doubt,” star swimmer Will Licon said. “There can’t be any argument. He easily could have 20 national championships.”

Texas will gladly settle for the 13 titles he does have, most recently claimed last weekend in Indianapolis. Not bad for a coach who makes only $232,000. That’s a pitifully low salary for such a legend. Pencil-pushers come close to that on UT’s campus.

By any standard, the 75-year-young coach doesn’t need a piece of paper to validate what he’s been doing for more than half those years. He is America’s swimming coach. Even that doesn’t do him justice because he’s also been a three-time U.S. Olympic head coach and produced a tidy sum of 39 gold medals, 16 silvers and eight bronzes. Yeah, he’s represented.

Reese is also the best coach to have ever put a whistle in his mouth on this campus. Best. Ever.

Texas should give him a huge raise and a lifetime contract, not that he wants it or would even accept it. He’s a guy who mentions that Florida State considered doing so for Bobby Bowden, only to not so gently push out the door the same football coach who built the Seminoles program from scratch.

Texas should also build a statue of a man who never rests, who never stops looking for new techniques, new ways to push his gifted swimmers, a man so connected to his athletes that they call him “Eddie.”

You want a statue, Eddie?

“They’ve got one (of him) already,” he quipped. He quips a lot. “But I think it’s under water now. I’m not interested in any of that stuff.”

He’s not. He’s interested in recruiting fast swimmers and training them to go faster.

He does that better than any coach in the nation. His Longhorns demolished the field for that 13th championship on top of 11 runner-up finishes. Think about that for a minute. The Texas football team can’t get out of its own way with three consecutive losing seasons. The basketball team didn’t qualify as one of the top 68 NCAA teams. The baseball team is middle of the road.

Clark Smith overcame a strained groin to win the 500 freestyle in record fashion and then a pain-wracked 1,650 freestyle in one of the greatest races ever. Licon became the first Longhorn to win three individual events. Jack Conger set an American record in the 200 butterfly. Between those two seniors, they combined to score a shade under 120 points. As a duo, they would have come in 13th in the team standings, just ahead of Purdue.

“I had trouble walking right after. I was not in a good place,” Smith said. “Some called it a stampede on the last day. The 11 events we won ties the most ever with the Texas team in 2003 so Texas is the undisputed champion of swimming.”

Reese also credits diving coach Matt Scoggin — who replaced the extraordinary Kris Kubik — and assistants Wyatt Collins and Chase Kreitler. Another key factor is Reese’s willingness, no, his insistence upon change. He changes his techniques and practices and motivational tricks by 10 to 20 percent a year.

“But I never change it to easier,” he said.

He got a tip from some swimmer and introduced the garments last fall. They fit around the ankle and impede a swimmer. They swam with them for eight weeks in the fall. His athletes, uh, didn’t love ‘em.

“Goodness, gracious, those were terrible,” Licon said. “It was like swimming wrapped in a fish net. It skyrockets your heart rate and makes your entire body ache.”

“There’s a lot of drag on them,” Smith said. “It makes you mad and pissed off.”

Reese used them as a way to overload them, tax their systems. “The only way your body will change and get more efficient is to overload it and get it tired.”

They won the championship on Saturday. But Reese sees a different timetable.

“It’s what you do from September through January,” he said. “It doesn’t get old because I’m hooked on performance and lifetime bests. I want people to come in and do sensational things.”

And don’t try to pin him down on a retirement date. “Hopefully,” he said, “before they try to run me off.”

Maybe when he’s 90. Of the 36 on his roster, the champions had just six seniors in the Indy pool. A Top 10 recruiting class is on the way. And just so his rivals know, Reese doesn’t do complacency.

On Monday? He had a 2 p.m. workout for the swimmers who didn’t compete in the NCAAs.

Golden: He’s an NFL long shot, but David Ash is back and giving football one last shot