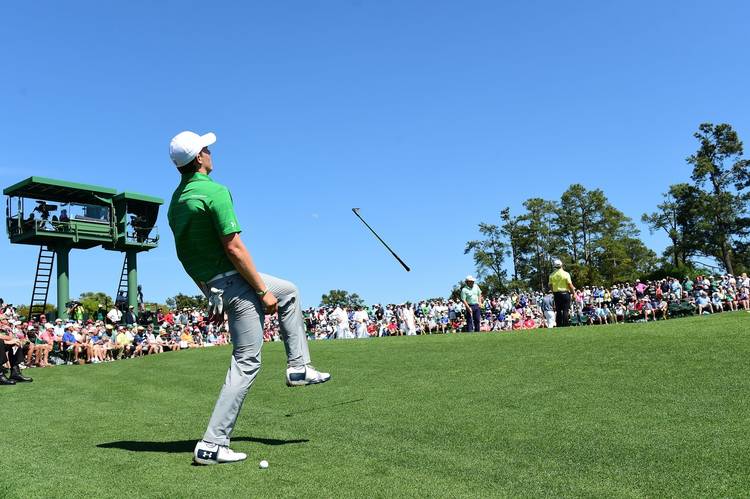 AUGUSTA, GA - APRIL 04: Jordan Spieth of the United States reacts to a missed putt by Bubba Watson of the United States on the 18th green during a practice round prior to the start of the 2017 Masters Tournament at Augusta National Golf Club on April 4, 2017 in Augusta, Georgia. (Photo by Harry How/Getty Images)

AUGUSTA, Ga. — Glynn Courtney would love to get his hands on them.

Not just because he’s an avid golf fan and a former minor tour player at that, but he makes his living in golf memorabilia.

And is there a more valuable piece of recent golf history than the pair of Titleists that Jordan Spieth deposited in Rae’s Creek on the 12th hole of Augusta National last year, the ones that cost him a second straight Masters championship?

No one knows for sure where those balls are. Maybe they’re still at the bottom of that ribbon of a creek that fronts the 12th green. Augusta doesn’t normally drain the creek or retrieve such wayward balls but when the dam opens, the increased water flow usually sends the balls downstream. Jordan probably wouldn’t want them back anyway, but they could certainly fetch a dollar or two for charity.

It’s not the same as Gene Sarazen’s double-eagle shot that he sank from the 15th fairway from 235 yards out in 1935 to set up his playoff win the next day. That may be the most famous golf ball in existence, at least this side of Tiger Woods’ curling putt from the fringe on No. 16 en route to history in the 2005 Masters.

Sarazen’s ball, one of just four double-eagles during this tournament, sits under glass in the Trophy Room in the Augusta clubhouse. Mike Gutierrez, consignment director for Dallas-based Heritage Auctions, said that ball could fetch more than $25,000 in an auction. Look for tighter security before Wednesday’s par-3 contest.

Jack Nicklaus hit his fair share of meaningful golf balls on these hallowed grounds, but can’t really remember if he kept any of them, even the one he sank on No. 18 at age 46 in 1986 as the oldest competitor to ever win a green jacket. The six-time winner here did hand one to the legendary Bobby Jones at the victory ceremony on the advice of an Augusta member. “I felt like sort of an idiot,” Nicklaus told me.

Jones just looked at him curiously, wondering what he was supposed to do with it. He’d know now. Everyone would.

Maybe Spieth’s golf balls carry a negative connotation. But then, Heritage Auctions sold the baseball that went through Bill Buckner’s legs and broke Red Sox hearts for a cool 400 grand back around 2009. Negative or not, history sells, but Spieth’s counting on making positive history here again and just might. He’s that good. Heck, even some perfunctory end-zone pylons from Super Bowl games have been sold at auctions, some going for as much as $3,910 from Super Bowl XLIII.

Courtney does have a golf ball signed by Spieth in red ink that, along with a Masters flag and a tournament badge, sells for $1,500. So how much would each of the 2016 Spieth balls be worth?

“Oh, five grand, probably,” said the 47-year-old former Coast Guard captain who manages the white-tented Millionaire Gallery that sits off Washington Road in a strip center mall across the street from Augusta National.

Tony Giese, another consignment director of Heritage Auctions, guessed each of the two damp Spieth balls would go for between $3,000 and $5,000.

They were worth a lot more than that to Spieth. In fact, had they remained dry, they were $1.8 million golf balls. Or might have been, had not the former Texas Longhorn sent them in the drink for a quadruple bogey to blow a five-stroke lead to Englishman Danny Willett, who cashed that winner’s check. Spieth’s not looking for history to repeat itself, unless it’s 2015 when he won the Masters.

On Tuesday, a few thousand caught a glimpse of Spieth pinpointing his tee shot to tap-in range on No. 12 in a practice round with Bubba Watson. “I turned to the crowd,” Spieth said, “and said, ‘I really could have used that one about 12 months ago.’”

Brad Boyett and Stuart Taylor, a pair of Longhorns fans from Austin, were in the gallery Tuesday offering their support. They remember watching the disaster at Amen Corner last year. “It was sick,” Boyett recalled.

Too bad neither ball was ever located. But then, as Taylor pointed out, “They didn’t have the Houston police force looking for them.”

One thing at a time. They located Tom Brady’s missing Super Bowl jersey recently, and Spieth did play a round of Augusta golf with the Patriots quarterback not long ago. So maybe Art Acevedo is on the golf ball case. Or will be soon.

Some buyer would probably spend a lot for Spieth’s balls if they were ever located, but authenticating such an artifact is the tricky part. Doing that with golf balls at the bottom of a creek must be even more difficult if they’re even there. Of course, Spieth always makes his Titleists with a Z — as zero in on a specific target. We trust that target will not be Rae’s Creek this week, but his dunkings have been the topic du jours at Augusta.

“I do know they can drain it,” Zoeller said. “Hopefully they’d use the balls again because you know they’re all new.”

“And some of ‘em have been hit only once,” noted Mahaffey.

“And not very well,” Green added.

RELATED: Bohls’ Postcard from Augusta, on what it’s like covering the Masters.

Golden: Tim Crowder has turned his love of training into a post-NFL career