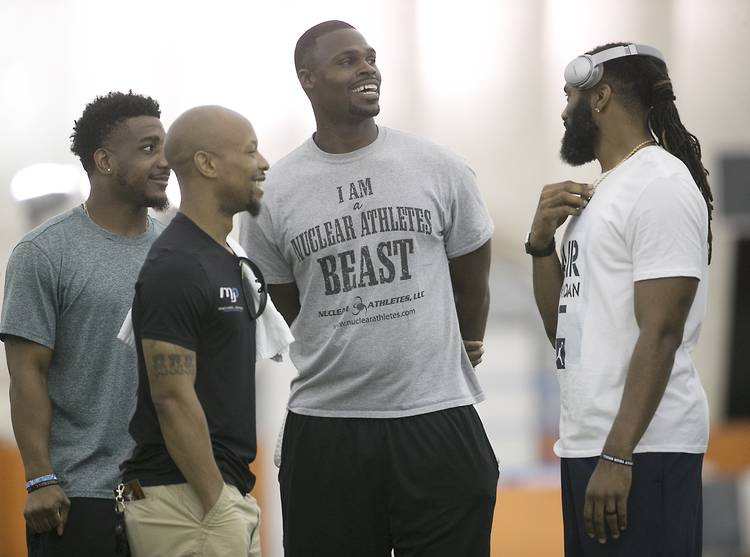 Former Texas player Tim crowder, center, has started a business in which he trains former Texas athletes, some of whom are in the NFL, such as Michael Griffin, far right. He joined Longhorns alumni who attended the Texas Football 2017 Pro Day on March 28 at the team's practice bubble. RALPH BARRERA/AMERICAN-STATESMAN

Pro timing day at Texas is about like all the others across the country.

Senior players push themselves to the limit to try and impress the assembled NFL scouts who have traveled to scope out prospective draft picks. Last week’s event at the indoor practice facility brought out some nice blasts from the past, as Michael Griffin, Quandre Diggs, Keenan Robinson and Emmanuel Acho were among those supporting the latest crop of Texas draft hopefuls.

The media was invited to attend the agility part of the workout around 9:30 in the morning, but when noon hit, many of the alumni headed for the exits and rolled over to DKR for a workout under the direction of a familiar face — Tim Crowder, one of the best defensive ends of the Mack Brown era.

From 2004 to 2006, the Longhorns went 34-4 and won a national championship. Crowder and fellow defensive end Brian Robison were the bookends on that defensive line, the former leading the 2004 and 2006 teams in sacks. The second-round pick of the Denver Broncos lasted five seasons and played in 60 games with Denver and Tampa Bay. He retired in 2012 after the Jacksonville Jaguars released him in training camp.

Out of football at age 28, Crowder, unlike former college teammates Derrick Johnson, Griffin and Robison — who are currently into the double-digits in league tenure — was in need of a new vocation.

That was the early start of Nuclear Athletes, his company of five years. The married father of two daughters now spends his days training NFL players in the offseason along with athletes from elementary to college age. His clientele sits at around 40 and is growing. The NFL players meet with him for four days a week and go through brisk workouts that include lifting, core training, agility, etc.

“We do a little bit of everything,” said Diggs, the Detroit Lions cornerback who is recovering from a pectoral injury. “I’m up at the school all the time and I saw them working out and went and joined Tim. I’ve been with him since the end of February. It’s a good way to get prepared for OTAs.”

You can find Crowder most days at Old Settlers Park in Round Rock, instructing the youngsters along with assistants and Texas exes Roddrick Muckelroy and Nic Redwine and Ohio University ex Kendrick Smith before he makes his way downtown to train fellow Longhorns alumni who are paying him for his services.

“I had always trained guys in the offseason,” said Crowder, now 31. “What happened with the pro guys is after I retired, several of the guys — Derrick Johnson was one — mentioned that I should make a living out of this. My methods are different from some of the others, and once I went full board, the guys started getting crazy results.”

The owner of a kinesiology degree from Texas, Crowder is having a blast in his post-football career because his love of fitness has always been there, going back to his playing days.

“He always had his own things that he liked doing in the weight room,” Griffin recalled. “He was studying different techniques. He had little injuries here and there to overcome while he was trying to continue to get bigger and stronger.”

Texas always had great athletes during Mack Brown’s run and his title team was one of the finest conditioned in the country, mostly due to the work of longtime strength and conditioning coach Jeff “Mad Dog” Madden, who was running the gym back in those days.

Crowder took lots of mental notes during his workout sessions and added his own spin to his regimen as a pro. His goal is to develop what he likes to call “football strength,” which is more about the core and less about some of the heavy power lifting that still dominates most weight rooms.

“I always wanted to be strong on the field,” Crowder said. “Instead of back squats, I focus more on exercises like dumbbell walking lunges and deep squat walks. It puts less strain on the spine and more on the core. If the core is weak, the body is weak.”

He doesn’t rule out a career on an NFL or college strength and conditioning staff, but Crowder said private instruction is his passion at this point.

As usual, it’s always about the work.

Golden: To be DBU or not to be DBU, that is the question for Texas’ defensive backs