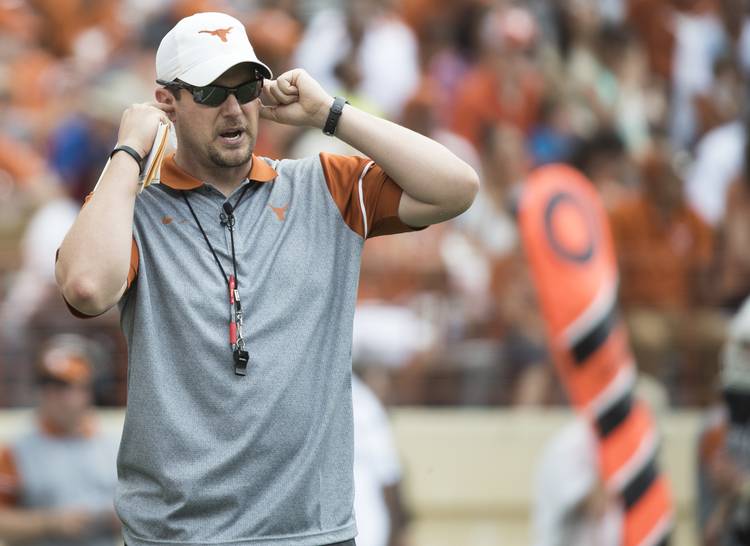 That way, there are none to take back. Smart guy, this new, edgy fellow with the intense eyes and the obsessive attention to detail.

Took Charlie Strong a while to learn that around here. We all remember when his first Texas team lost five games en route to an even more disturbing seven defeats, and Strong said no way would his team ever lose that many games again. He was wrong, which unfortunately happened a lot.

Not even creative math — or fake math as it might be called in today’s alternative news culture — prepared him for seven losses every year.

Herman’s not prepared for that eventuality either, but he steered very clear of touting a specific number of victories in the fall because, well, he just doesn’t know. How could he? He knows that he has 17 starters back and a world of improvement to make, and that Oklahoma, Oklahoma State and Kansas State aren’t getting any weaker.

But it’s safe to take some stock from his one blanket statement.

“Thank God we don’t have to play tomorrow,” Herman said.

And don’t think God wants to see another seven-loss Longhorns team either. At least not tomorrow.

From the looks of the spring contest before about 20,000 onlookers, the Longhorns sure seem to be a middle-of-the-pack 6-6 or 7-5 team. But, hey, those teams go to bowl games, at least. They looked plenty physical in that bull-in-the-ring drill, but not United Airlines physical. Very few big hits in the game itself. Does the roster even carry a tight end? New kicker Joshua Rowland looked capable from inside 40 yards but doesn’t have a big leg.

The wide receivers were impressive, including emerging Reggie Hemphill-Mapps and Lil’Jordan Humphrey. If Collin Johnson is not an All-Big 12 wideout next season, it won’t be the fault of the electric 6-foot-6 sophomore who caught eight passes for 117 yards and two touchdowns Saturday. But then Dorian Leonard dropped a perfect pass in the end zone from freshman Sam Ehlinger.

Shane Buechele showed a clear separation between him and Ehlinger, not that Herman was ready to anoint him. The defense had its moments and stopped the No. 1 offense on fourth-and-2 in the tiebreaking play that gave the defense a 52-51 win, but the backups had more downs than ups, and Malik Jefferson had just one tackle.

So asked for his expectations for next season, Herman pooh-poohed such a line of questioning as from “a sports journalism manual,” which is absolutely correct. Think it’s at the bottom of Page 2, but it’s in there.

Finally, Herman relented and offered, “It sounds like coachspeak, but I don’t have any.”

That’s OK. The fans and media will have them for you.

After one spring in the books, you can count on several things. If someone’s wearing orange, young or old, Herman’s gonna hug ’em. If he sees a player take a lazy step, that guy will be standing next to him. He does like interaction. I assume progress has been made overall, but it’s tough to calibrate.

Herman gathered a little steam and said: “How far along are we? I don’t know. What, 81.7 percent? I worry about Monday.”

And he has plenty to worry about on Monday. And Tuesday. And the day after that. But if you were counting breathlessly on a full 82 percent improvement, chill. There’s time.

Herman’s scouring the want ads for a third quarterback. He’s desperate for a tight end if Garrett Gray doesn’t develop. He could really use some more depth on the defensive line. He admitted he wants more mental toughness in his receivers. He wants more production out of right tackle.

That sounds like a lot of talent. Maybe he didn’t totally understand my question, but I doubt any Big 12 team has 22 big-time winning starters on its depth chart.

And deep down, Herman doesn’t really know either. But so far he seems to like the buy-in and the want-to. And winning big? That’ll be a have-to.

As his defensive coordinator, Todd Orlando, echoed, “We made strides. Are we there yet? Absolutely not.”

The opener against Maryland is almost five months away, and the expectations will grow immensely with every positive progress report.

Short of concrete targets in April, this staff’s looking for players with high motors who play hard. Full-speed mistakes, if you will. All-out effort.

For now, those expectations will have to do.

Golden: Texas looks to be getting defensive at just the right time

Golden: Herman needs the alumni to help turn Texas around