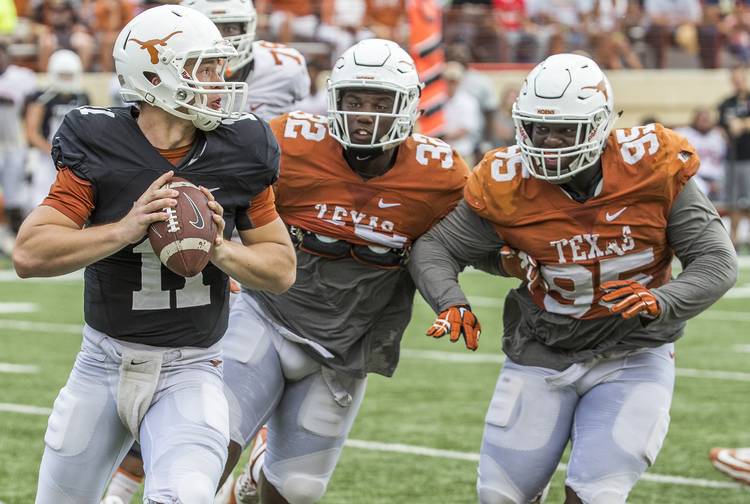 Texas Longhorns (11) Sam Ehlingerlooks to pass as (32) Malcolm Roach and (95) Poona Ford tried to get a sack during the Orange and white spring football game at the Darrell K Royal–Texas Memorial Stadium on Saturday, April 15, 2017 RICARDO B. BRAZZIELL/AMERICAN-STATESMAN

A mass of humanity bore down on Toneil Carter at the goal line.

The meeting at Texas’ only healthy running back came a minute after Tom Herman decided that Saturday’s Orange-White spring game would come down to one play.

Two yards separating a win from a loss.

By the time the freshman got his hands on the ball, four guys bigger than him were in his grill. Cornerback Kris Boyd showed up to finish off the stop.

Touchdown denied, followed by two words we haven’t heard around these parts in quite some time: Win, defense.

The final score of the annual spring game is of little importance so I won’t waste space with it here, but the real importance of the last 15 practices has a lot to do with the 2017 Longhorns not being a sieve on defense. You’re never going to stop every offense in the Big 12, but there’s something to be said for slowing down the opponent.

The last two defenses have been two of the worst in school history, so there’s nowhere to go but up for this group. Offense matters, but this program will go nowhere without light years of improvement on the other side of the ball.

What I saw Saturday was a concerted effort to gang tackle, and while my enthusiasm is somewhat tempered because we’re talking about a glorified football practice on Easter weekend, it’s obvious the message has been sent to get to the ball in big numbers, from the interior with Chris Nelson and Poona Ford to the edge with Malcolm Roach and Naashon Hughes to the back end, where safeties DeShon Elliott and Brandon Jones got plenty of reps.

Cornerback P.J. Locke told me that he doesn’t worry about missing tackles anymore because he knows a teammate is right there to cover his tracks.

“How many guys have missed a tackle?” Defensive coordinator Todd Orlando starts most defensive meetings with that question. Every hand goes up without hesitation.

“The percentage versus a good player and yourself, you will probably get him on the ground maybe 30 percent of the time,” he said. “But add one more person 2 yards away from that guy, 30 percent goes to 95 percent. So that’s our sell right off the bat.”

Outside of the helmet-to-helmet collision between Carter and redshirt freshman defensive back Chris Brown in the first quarter, there wasn’t as much furniture moving as some might have hoped for, but the things that win ballgames — a sturdy run defense and a pass rush that resulted in 10 sacks — were evident.

“It was really good to see guys flying around and going to the echo of whistle,” Herman said.

The challenge was made this spring to get stops, but has it been fully accepted? We’ll get those answers this fall.

Bohls: Expect this — Herman’s Texas bunch will play hard; for now, that will have to do