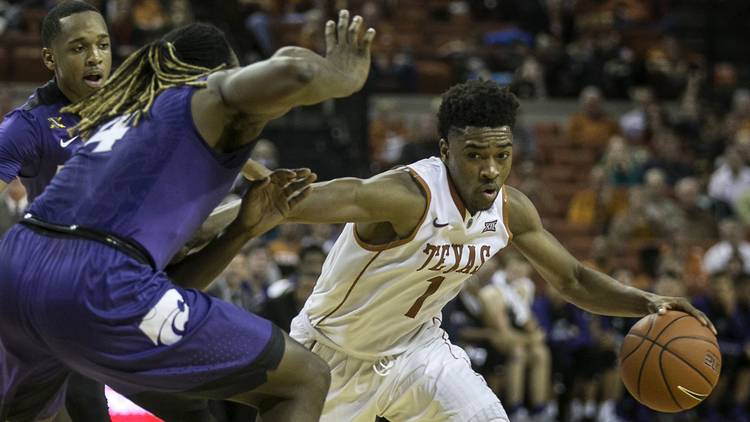 Former Texas point guard Isaiah Taylor, right, is a rookie for the Houston Rockets. He’s only played minimal minutes for the Rockets, but is patiently waiting for his time to shine in the NBA, writes American-Statesman columnist Kirk Bohls. CREDIT: Rodolfo Gonzalez/2015 American-Statesman

The hand-written sign scrawled in tape above his small locker in the visitors’ dressing room at the AT&T Center before Game 1 of the Western Conference semifinals said it all.

Isaiah Taylor laughs and shrugs when a reporter mentions it and said he had “no clue” about the identity of the Rockets hazer. Nor does he mind. He’s just glad to be suiting up for an NBA team in any capacity.

“Yeah, me and Troy,” Taylor said, smiling and pointing to 6-7 forward Troy Williams out of Indiana. “We’re rookies 1 and 2, me and Troy.”

He’ll take it for now. It’s the next step on what may be a quick journey toward a flourishing career. He’s got star qualities written all over him. Athletic. Type A personality. Killer smile. Maturing.

He even cut his short dreads to a shaved look on the advice of Longhorn assistant coach Jai Lucas, who told him “it’s time to make some money and cut your hair.” He can take coaching.

As he was in three tantalizing seasons at the University of Texas, Taylor still brings an assuredness and a swagger that belies the fact he left school early, went undrafted and has a very small sample size of experience at this level. And that light-up-a-room smile.

Just a year off a college campus, Taylor made his NBA debut with Houston against the Suns on April 2, scored three points in that game and had three assists against the Clippers a week later. In all, he played just 13 minutes in four games. He’s starving for more.

He’s also been active for one game in this series against the Spurs and was on the floor for less than four minutes in the Rockets’ Game 1 blowout, just long enough to hand out an assist, commit a foul and dream of what’s to come. His shot’s coming, literally and figuratively.

“I’ve got no complaints,” Taylor said, biding his time.

He’s always had unmatched speed with the ball, a blur of a guard who can get to the rim with ease and finish with either hand. He’s an adept passer and an improving defender. It’s always been his poor shooting touch that held him back, a deficiency he says has been corrected.

He may not be Jason Kidd, yet, but his learning curve may follow that of the former Mavericks guard who came out of Cal without a shooting touch and literally made himself an extremely accurate shooter.

“At Texas, supposedly he couldn’t shoot. That was his rep, but I couldn’t have been happier with him,” said Matt Brase, Taylor’s coach with the D-League playoff finalist Rio Grande Vipers this past season. “But he shot the ball very well for us. Isaiah played at a very high level for us.”

In fact, in 25 D-League games, he showed off an uncanny 46 percent accuracy from behind the line and averaged 21 points a game. That was a marked improvement from his stint with the Rockets’ NBA Summer League team when he hit only 25 percent of his three-point attempts.

“It was something I needed to work on,” Taylor said. “I’ve got a lot of confidence in it now.”

Vipers assistant coach Cody Toppert, one of the top three-point shooters in Ivy League history at Cornell, diagnosed Taylor’s jumper as too flat and changed his technique, releasing the ball when his elbow was above his eyes. Former Rocket John Lucas works with him now. The difference was profound.

Assuming it’s fixed and stays fixed, Taylor should be a sure thing to make it. He’ll likely play for Houston’s NBA Summer League team again.

“He’s as quick as a cat,” Rockets coach Mike D’Antoni told me. “We like him. He’s got a chance if he keeps improving. I like his possibilities.”

Brase likes them, too, even though Taylor injured his wrist just 10 games into the season. It didn’t require surgery and was only a temporary setback.

“He came back and was dominant,” Brase said. “He’s always in the gym. And he thanks you all the time. You don’t get that very often.”

He watched Taylor grow from a project with a reputation as a bad shooter to a confident, almost cocky, electric point guard with better shooting form and a real chance at making an NBA team. Very soon.

It might not necessarily be the Rockets with whom he signed shortly after the draft that overlooked him. After all, Houston already has 14 signed players for next season, including MVP-candidate point guard James Harden and the hyperactive Patrick Beverly, who’s a defensive whiz. And that’s before free agency and this year’s June draft expands the roster. He’s making $305,000 this season, but his three-year deal increases to $1.3 million next season if he’s on the club.

So is Taylor NBA-ready?

“I think so,” said Brase, a former walk-on at Arizona where his grandfather, Lute Olson, was a Hall of Fame coach. “He’s got that quickness and that confidence in his game. He can get into other point guards. He has elite speed. He darts through the lane. He’s just so fast.”

D’Antoni has noticed as well.

He couldn’t think of an easy comparison with an established NBA point guard, but does rave about Taylor’s rare speed. Asked who in the league is faster with the ball, D’Antoni mused, “Maybe nobody.”

Taylor’s not in a hurry, but he really is. He turns 23 in July. He was champing at the bit to get into a game against the Spurs, a team he’d loved to have joined last summer before San Antonio drafted Washington’s longer, athletic Dejounte Murray, who’s been thrust into the Spurs’ starting lineup with the season-ending injury to Tony Parker.

When Taylor was told an hour before Game 3 tipoff at the Toyota Center that and Murray, also a rookie, was starting, he stood in the back of an elevator. He threw his head back with a twinge of envy.

“That’s OK,” he said as the elevator door was closing. “Next year’s my time.”

Golden: Herman needs the alumni to help turn Texas around