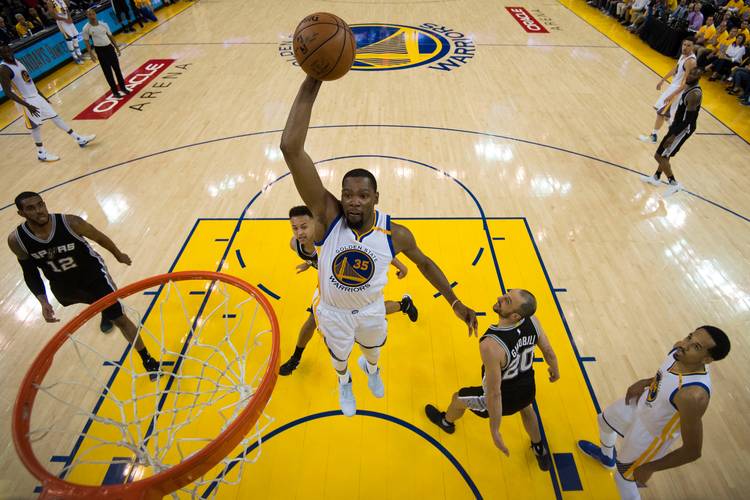 When it comes to the NBA playoffs, Kevin Durant has made one thing perfectly clear.

The Golden State sharpshooter all but guaranteed Spurs do-it-all Kawhi Leonard would play in Game 3 despite a badly sprained ankle suffered in the series opener of this lopsided Western Conference final. He was wrong. Leonard didn’t suit up at the AT&T Center where the ensuing carnage took place.

“I didn’t believe it until the ball tipped up,” Durant said in the post-game press conference. “But yeah, I thought he was going to come out and play.”

Psychic, Durant is not.

As for all the other worldly and otherworldly powers, Durant has most all of those, so we’ll cut him some slack for his poor prediction about Leonard’s availability.

And true to form, San Antonio missed him.

Golden State, on the other hand, didn’t miss a beat, crushing the Spurs for a third consecutive game in a 120-108 rout that puts San Antonio on the brink of elimination Monday night.

It rarely ever has since Durant joined the already-best team in pro basketball last summer. Yeah, technically the Cleveland Cavaliers are the defending champs, having erased the Warriors’ 3-1 lead in last year’s improbable Cavalier comeback when the suspended Draymond Green couldn’t hold his temper and Steph Curry forgot he was Steph Curry.

But everyone knows Golden State has the best team on paper. Off a 73-win season, it picked up arguably one of the league’s best shooters even though it didn’t need him. Like Disney World needed another ride. Or Trump needs another subplot.

The Bay Area became the Buy Area as the talent-rich franchise added Durant as a free agent. His skills were once again on display Saturday in a 33-point, 10-rebound performance that also included four assists, two steals and a block. Durant briefly flirted with the Spurs in free agency, and they could sorely use another scorer of his versatility and length, but Durant apparently wanted a sure thing.

The Warriors are so deep the writers couldn’t figure out which was the best Warrior so they democratically voted Durant and Curry on the All-NBA Second Team and Green on the Third Team. And I’m sure had there been a Fourth Team, Klay Thompson would have been on it.

Heck, new starter Javale McGee, filling in for injured Public Enemy No. 1 Zaza Pachulia, played like a Fifth Teamer the way he scored 11 of his 16 points in the first quarter to keep Golden State close to the hustling Spurs.

“Every time you look up, you’re playing against four All-Stars,” Pop said, “so you’d better be pretty perfect. It’s a helluva team.”

The Warriors are so stacked, whom could you possibly double-team? In the third quarter alone, Durant scored a personal playoff career-high 19 points, including 17 straight to give his team some separation en route to its 11th straight post-season win without a loss. When Durant went off in the third quarter with what Curry called “a clinic,” he mixed in fadeaways and three-pointers and back-door cuts.

When I asked the eternally young Manu Ginobili if he could remember facing a team with more offensive firepower, he said, “Not that I can remember. So many good shooters, and they pass the ball so well. Offensively, they’re one of the best teams I’ve seen.”

And now they play good defense, too.

“Now it’s getting tougher,” he added, “and we don’t have our go-to guy, the one that creates the most for us.”

The Warriors almost have too many guys to go to. More often than not it’s Durant, the former Texas Longhorn who was vilified in many corners by joining the loaded Warriors and stacking the deck. Sounds like smart business.

Durant chose wisely, and we may be witnessing a dynasty that could stretch into the future for years. Of course, Durant could opt out this summer after one year, and Curry’s a free agent who is unlikely to roam. But Durant stands to make almost $28 million next season. It’d be heartwarming to see Durant reunite with Russell Westbrook in OKC or wind up on any of the three Texas teams that could use him, but don’t bet the Golden State bridge on it.

He seems at home in the Bay. He’s taken the pressure off Curry and Thompson and makes them so relaxed, they can just wait for one of their multitude of stars to go off. Green has three years remaining on his contract, and Thompson two. It’s no longer the Splash Brothers but a full tsunami.

Asked if Curry ever feels pity for opponents having to defend Durant and the rest, he said, “It’s fun to watch on the floor when things are clicking. We keep it simple as silly as it sounds. Kevin’s very smooth, and he can do it in a lot of different ways.”

As it is most nights for a team that offers an embarrassment of riches and needs just five more victories to win its second NBA championship in three seasons. As Curry said, it really is quite simple.

“Whoever has the hot hand,” Curry said, “we get him the ball and get out of his way.”