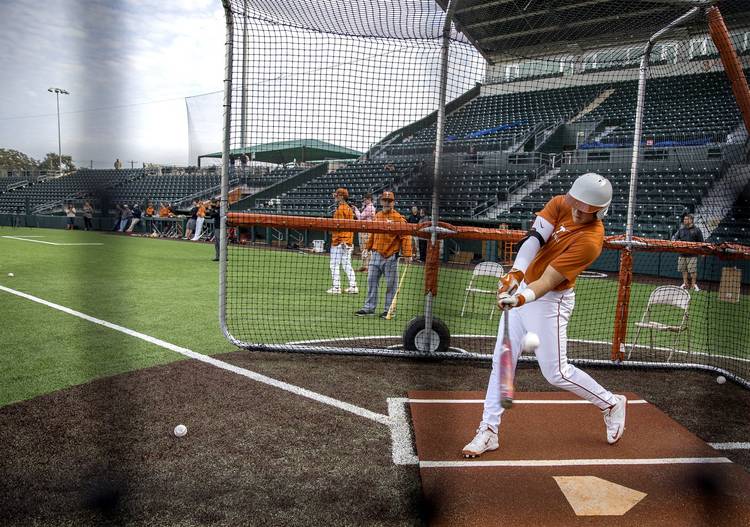 The Texas baseball team may rank last in the Big 12 in batting average, but it ranks first in double takes.

That’s as in hitters, staring down at signals delivered from the third base coaching box and incredulously giving a second glance in disbelief.

Earlier this season, Kacy Clemens came to bat with a man on first and all but expected the sign for a sacrifice from third base coach Sean Allen. It never came. It usually hasn’t.

“I’ve always looked down there for a bunt sign,” the senior first baseman said. “But coach Allen says a double in the gap is way better than a bunt. I said, ‘All right, I agree.’ But I let him know if he wanted me to lay down a bunt, I could.”

A grand slam is even better than a double, and Clemens supplied that in the first inning of Sunday’s 9-4 win over West Virginia to claim the series for some badly needed momentum entering this week’s Big 12 tournament.

Clemens and his teammates have faced some culture shock as they become accustomed to a new era of Texas baseball.

The bunt is out. Swing away is in.

Consider that in this past weekend’s three games, the Longhorns had just one sacrifice at-bat. One. They have just 30 on the year, which ranks fifth in the league and amazingly 129th nationally.

Whereas Augie Garrido famously said he’d bunt Babe Ruth if the situation called for it, David Pierce long ago adopted a different approach. There’s a time and a place for bunts, he and Allen, his hitting coach, believe. But they prefer a less restrictive, more aggressive philosophy that worked just fine against the Mountaineers, against whom they hit .393 with runners in scoring position.

“We want to pressure teams,” Allen said, “and we don’t want to give up outs.”

While it has hardly transformed Texas (34-20) into a well-oiled hitting attack, it has been efficient enough to produce runs for a team that finished sixth place in the Big 12. Had a game against a weak Oklahoma State team not been rained out, Pierce’s club might have tied for fourth.

Clemens and Zane Gurwitz combined to hit .471 as well as drive in seven runs and score eight. They’re valuable veterans.

“You definitely have more freedom as a hitter,” Gurwitz said, “so you can relax in all situations. It’s been nice.”

The Longhorns didn’t hit all that well with an overall .258 average against West Virginia, but they were efficient. That’s why they’re a lock to make the NCAA tournament, maybe as high as a No. 2 seed on the road, and could be a very dangerous team in the playoffs. They rank second nationally in fielding and ninth in ERA, two critically important phases.

They won the first game against the Mountaineers on Friday, scoring runs on hits from Bret Boswell and Patrick Mathis but also getting a wild pitch and a pair of sacrifice flies. After a loss Saturday, they rallied for nine runs Sunday to win the series even though.

Not anymore. Clemens is a big reason, smashing a grand slam on Sunday. That’s one of 43 home runs Texas has. Seven Longhorns have four homers or more. Kacy and his brother, Kody, have been the most productive hitters all season although Gurwitz is heating up.

Still, that .251 team average ranks last in the conference and 263rd nationally. So is Texas a bad-hitting team?

“I don’t think so at all,” Allen said. “Hitting is a hard thing to do. And being able to hit well has kept us as a team from taking off.”

Allen and Pierce are looking for quality, productive at-bats. Texas has been held back, in part, by season-long leg injuries to Mathis and Gurwitz, who were expected to bat leadoff and third or fourth in the order. Both are getting closer to 100 percent as Gurwitz showed with six hits in 11 at-bats against West Virginia.

In addition, a lineup that has included three freshmen at shortstop, third base and in the outfield in David Hamilton, Ryan Reynolds and Austin Todd understandably led to growing pains for the offense. And a bunch of Longhorns got off to horrendous starts, though Allen said “a lot of guys have turned the corner.”

Allen’s worked hard to hone their skills individually. He’s worked on Mathis thinking “scoreboard to scoreboard” and using the entire field rather than trying to pull everything. He’s worked on Michael Cantu not waiting as long to attack the steady diet of breaking balls he sees. He’s straightened up Todd’s stance despite some early resistance.

For Hamilton, it’s been a matter of restoring his confidence after early-season struggles and getting him not to hit balls in the air so much and to go with more pitches to the opposite field. The first couple of weeks, he got zero hits despite squaring up the ball a lot, but he never took his offensive woes to the field.

Neither have his teammates, which is why they have a legitimate shot to do some damage in the post-season. An extra hit or two sure would help.

TEXAS AT THE PLATE

A glance at the Longhorns’ team batting average, average runs per game and total home runs for the past four seasons:

Bohls: Durant no psychic seer, but can see a title