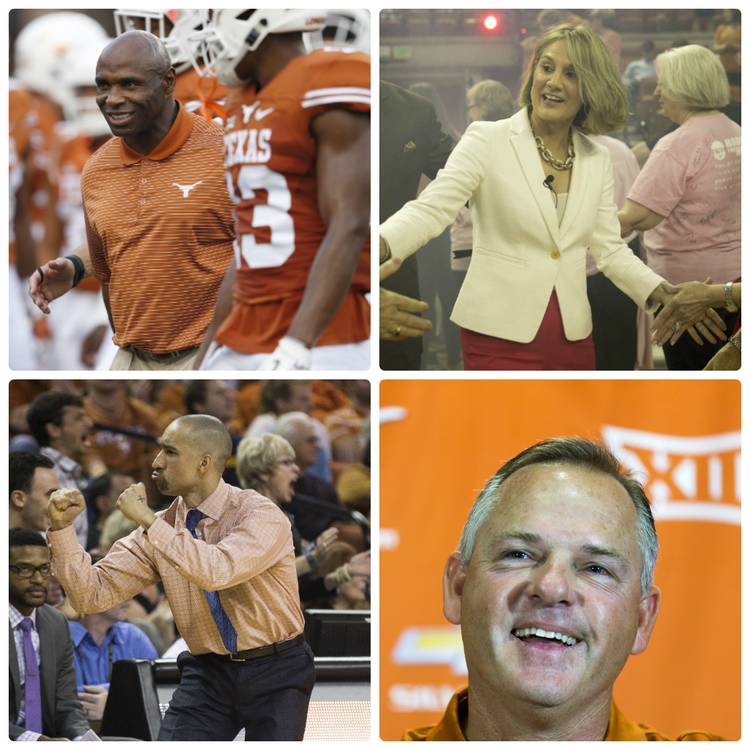 Save for track and field, the book is almost closed on this latest Texas athletic season. Thankfully. So it’s time to give out our awards of bests and worsts.

Yes, there were some bests. There really were. Eddie Reese is a consummate winner who needs a statue and should be the new AD. Jerritt Elliott is a model of consistency. John Fields has raised the bar for men’s golf. Mario Sategna has a very competitive track squad.

RELATED: Buying Bevo: If Texas was a stock, market signals indicate it’s time to get in now

But Longhorn Nation is hurting because the football team had a losing season again and didn’t even go to the Cactus Bowl. The men’s basketball team won 11 games, finished last in the Big 12 and lost its best player to the NBA. The loaded women’s basketball team couldn’t elude the Baylor curse and only reached the Sweet 16. The baseball team hit a wall but hit nothing else, blew a 2-0 lead and couldn’t get out of a regional.

But I can’t say strongly enough that Longhorns athletics are poised for a big, big turnaround in 2017-18. Can only get better, right? But the last nine months, not so much.

1. Who was the biggest star?

2. Who was the biggest flop?

3. After the obvious — Buechele — who was the Rookie of the Year?

4. Other than the Tom Herman hire, what was the biggest off-the-field news?

5. What was Texas’ biggest mistake?

(a) Not cloning Eddie Reese

(b) Charlie Strong not naming himself defensive coordinator sooner

(e) Not going after Jim Schlossnagle

(b) Swimming and diving national championship

(a) Loss to Kansas

(b) Loss to Kansas

(a) Try to move to the Big Ten

9. Tom Herman’s riskiest move so far has been …

10. The Longhorns baseball team is …

(b) A long way from being back.

(c) An affront to offense.

11. The team that made the most progress was …

12. The team that will break out in a big way next year will be …

14. The team that will win or flirt with a national championship will be …

16. Best eyebrow-raising story of the year was …

Here are the correct answers:

1. D. Foreman blew everyone away, topping 2,000 yards, but national champion swimmer Smith was a close second.

2. D. A 16-21 record and three straight losing seasons speak for themselves.

4. A. You get what you pay for. You get fancy lockers, you’d better produce.

5. C. Clark’s a fine person, but there’s no good reason Plonsky should keep the softball coach after another mediocre season. But the Dell Medical Center needs to ratchet up research on cloning Reese.

6. A. We’ll always remember where we were the night Charlie had the biggest of his five victories. And try to forget the 21 losses.

7. It’s all of the above. Texas cannot lose to Kansas. Fans, bring out the paper bags for headgear.

8. A. It makes more sense to join the Big Ten. I’d love the SEC, but that’s never going to happen. No Pac-12 and its late hours, please. And no movement can happen for three or four years at a minimum.

9. B. It’s very risky and sets a dangerous precedent. If allowing in Leitao is OK, is allowing in multiple drug offenders? However, many might answer (d) because Herman probably could have had the LSU job.

10. B or C. David Pierce does not consider sixth place in the Big 12 or just making a regional being back. A team has to average more than three runs a game to win a regional.

12. All of the above. All are on the upswing, but the guess here is Shaka Smart will have the biggest improvement and finish among the top three in the Big 12.

13. All of the above, but mostly C. Not a really hot seat because she has tremendously elevated the program. However, if 10 McDonald’s All-Americans on the roster aren’t enough to get to the Final Four, Aston may forever be in Kim Mulkey’s backseat. Aston has to show she can coach as well as she recruits.

14. B. Elliott always has his team playing at a Final Four-caliber and just had the nation’ top recruiting class again.

15. Probably none of the above, but we’re hopeful it’s A. But don’t completely discount Perrin getting a lifetime contract because Fenves apparently is happy with him.

16. D. Nothing like a fascinating pee chart to arouse the fan base.

Golden: With an NBA title, Kevin Durant will move up the Longhorns hierarchy of greats