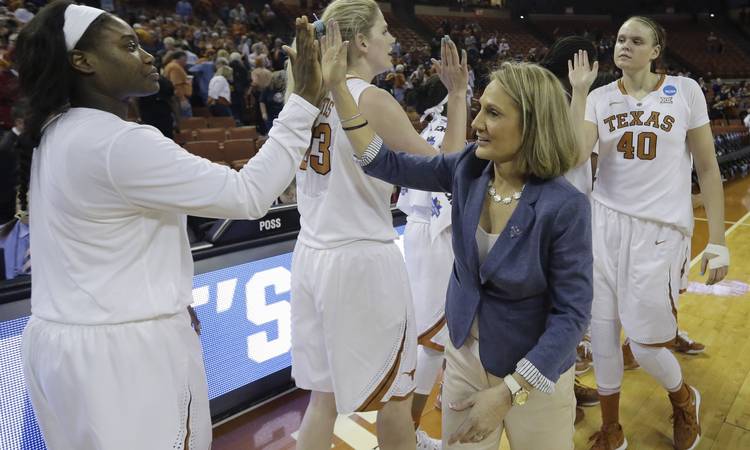 Kevin Millar spoke of the five times he was eligible for the MLB draft and never got selected.

Texas basketball coach Karen Aston explained why she laughed after a gut-wrenching defeat to her most bitter rival.

World decathlon champion Trey Hardee lamented the pole vault struggles that cost him a shot at a gold medal at the 2008 Beijing Olympics.

These successful sports figures all have one thing in common: they value the purity of the games we enjoyed playing as kids.

Millar and Aston were guest speakers at Deep in the Heart of Sports, hosted by 104.9 The Horn sports director Erin Hogan. The event was centered around keeping youngsters engaged in athletics amid the declining retention rates in youth leagues around the country.

Youth sports author and counselor Jim Thompson founded Positive Coaching Alliance in 1998 under the mission statement: Better Athletes, Better People. Thompson understood that his organization could be a vehicle to help parents develop more well-rounded people through athletics. The idea is to instruct young athletes in a positive manner and build them up, especially when they fail. The new chapter in Central Texas hosted the fundraiser at the University of Texas Golf Club Thursday and the keyword for the night was fun.

About 40 million children play organized sports in America, but 70 percent of those young athletes quit their teams by the age of 13. This organization is out to reverse that trend to benefit youngsters who are participating today.

Former college athletes Trennis Joness — a Westlake grad who played hoops at Colorado before becoming the executive director of the Central Texas chapter — and Shawn Jagodzinski, a former Iowa defensive end who is on the chapter board, are using their experiences to help PCA fund workshops in conjunction with school districts and youth leagues in the area. Getting Aston and Millar to help spread the message is a testament to their passion.

Long before he won a World Series with the 2004 Boston Red Sox, Millar, an Austin resident who coaches his four kids, was an unknown at a Los Angeles junior college before he ended up at Lamar University, where he credits the mentorship of legendary coach Jim Gilligan and several independent league coaches that came along later with keeping him going when it seemed his chances of making the bigs were remote at best.

“I wasn’t very smart, but I always had great coaches,” said Millar, who hosts Intentional Talk — a baseball show — on MLB Network and ESPN2. “I remember in 1993 I was making $2,150 a month for the St. Paul Saints in the Northern League and I know the coaches couldn’t have been making much more than us. I tell the kids I coach there is a difference between you and the MLB guys, but the game is the same.”

Aston was a longtime assistant under Hall of Famer Jody Conradt. Six players from their 2003 Final Four team are now coaching, including her current assistant Jamie Carey. Aston is, in a couple of words, tough minded. Her kids know it. Her coaches know and yep, so does the media. But it doesn’t mean she loses sight of what is important in her profession. She is a product and practitioner of mentorship and believes relationships are what make sports such a powerful influence in the lives of young people.

After Big 12 player of the year Brooke McCarty missed a three-pointer at the buzzer that would have forced overtime against archrival Baylor this past season, Aston, the fiercest of competitors, didn’t scream or throw up her hands in disgust. She laughed. She learned long ago that players are always watching their coaches.

“Had I reacted differently, I don’t know what the rest of the year and what the rest of that child’s year would have been like,” Aston said. “I had a lot of people tell me that that was a surprising reaction. That’s the leadership part that you have to learn as a coach. I’m a work in progress at all times.”

Hardee, who was honored with the organization’s Elevator Award along with former Big 12 heptathlon champion Dr. Fiona Asigbee, remembers when his love of sport was drowned by the weight of expectations. Hardee sat in fourth place through seven events in Beijing with a great chance to finish on the medal stand. Then he n0-heighted in the pole vault and slid to 26th place, ending his medal hopes.

The product of a single-parent household, Hardee, still in disbelief at the turn of events, needed the counsel of the one person who was there from the beginning. He called Mom. Jan DiCesare consoled her 24-year-old boy and then asked him an important question: Are you having fun?

“I was at the Olympics,” he said Thursday. “I should have been having the time of my life, but I wasn’t.”

He thought about the frustration of playing for a Little League team that went 0-14, but how the coaches and parents made sure the kids had fun. Hardee rediscovered his love for the sport and went on to win world championships in 2009 and 2011 and a coveted silver medal at the 2012 Olympics.

The good work of the PCA is making an impact nationwide. Sports can teach and sports can bring people together. While winning is great, it all starts with the love of the game from childhood.

It’s supposed to be fun.

Bohls: Texas athletics is (a) dead (b) struggling or (c) about to thrive