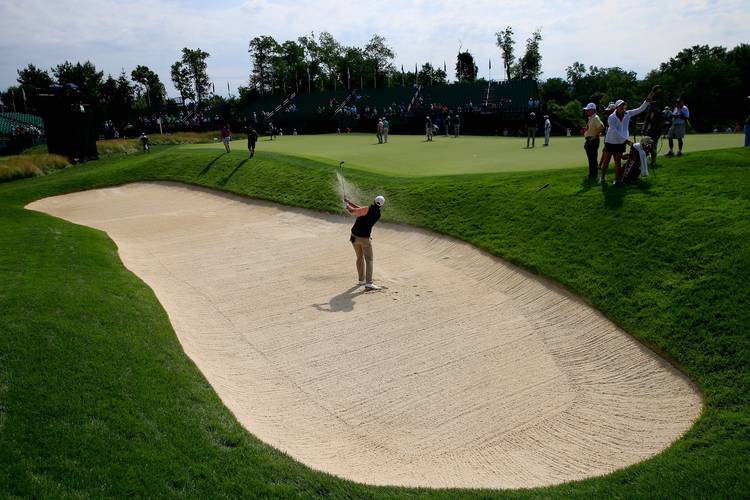 OAKMONT, PA - JUNE 15: Amateur Scottie Scheffler of the United States plays a bunker shot during a practice round prior to the U.S. Open at Oakmont Country Club on June 15, 2016 in Oakmont, Pennsylvania. (Photo by Rob Carr/Getty Images)

Scottie Scheffler is anything but an underachiever.

But until he achieves exactly what he wants — and that’s a lot — the already-accomplished Longhorns golfer won’t be satisfied.

Which is why he approaches this week’s tournament with a modicum of guarded confidence after an outstanding season at Texas. That would be the U.S. Open, which annually humbles more than a few great golfers.

Scheffler will be among a dozen amateurs to tackle one of the longest venues to ever host an Open. He’s very long off the tee, is striking the ball as well as he ever has and he won’t be intimidated by an Erin Hills course in Wisconsin that measures 7,741 yards. And coach John Fields raves about his spectacular short game as well.

The three-time state champion at Highland Park ended his junior season at Texas with six top-three finishes, including a win at the East Lake Cup. Overall, he shot 11 rounds in the 60s with 24 of his 37 rounds at or under par. And he played Erin Hills in a 2011 U.S. Amateur event.

So can he win the Open?

“I think so,” Scheffler said unapologetically Monday. “I don’t see why not.”

History might tell him why not. No amateur has won a U.S. Open in 84 years, not since John Goodman — no, not that one — won in 1933 at the North Shore Country Club outside Chicago. That Goodman was an orphaned Lithuanian out of Omaha, Neb., who once beat Bobby Jones in match play.

Scheffler didn’t come close to winning in his first crack at the Open either, but fired an impressive first-round 69 at Oakmont last summer before missing the cut. But his long-time Dallas teacher, Randy Smith, who also coached Justin Leonard, loved what he saw last June and sees a huge upside in a golfer he’s instructed since he was 6.

“The stage is not something he shies away from,” Smith said after working with Scheffler for 14 hours this past weekend in prep for the Open. “This type of competition, he’s very used to.”

After all, this is a guy who finished 22nd in the Byron Nelson. When he was a junior in high school.

“If he could have putted, he would have been in contention,” Smith said.

And even though it will be his second Open and he’s playing as well as he ever has, Scheffler puts it all into perspective.

Never mind that he finished second in this year’s Big 12 championships, third in Texas’ NCAA regional on his home course and third in the national championship after three rounds of 68s. “He’s obviously got tremendous momentum,” Fields said.

But Scheffler points out another fact.

“I’ve been playing pretty good,” Scheffler said, “My game feels solid, but I didn’t win any of those.”

Scheffler doesn’t get ahead of himself but won’t be overwhelmed this week.

He has a big-game flair. He won the 2013 U.S. Junior Amateur and the Big 12 title as a freshman. A year ago, when Texas came within a hair of winning the school’s second national championship in four years despite losing star Beau Hossler to injury, Scheffler defeated Oregon’s Aaron Wise in the final to give the Longhorns a chance.

He would have done better at Oakmont, but Smith blames his second-round 77 on incessant weather delays that played fits with Scheffler’s long frame, a product of an incredible growth spurt the last eight years. His physical stature reminds of Dustin Johnson, the reigning U.S. Open champion.

As a result, Scheffler’s had to battle the challenging affects on his muscles and requires extensive stretching exercises before he tees off. On that second round at Oakmont, three weather delays left him with body stiffness he couldn’t overcome.

“His mind was still saying you could do this, but his body wasn’t going to let it,” Smith said. “It’d be different if it was a bone situation or joint situation. But it’s muscles getting used to its new frame. His 69 at Oakmont was very pedestrian. There weren’t any heroic moments. It was like watching vanilla ice cream melt. In a very good way.”

Just slow and steady, like his pro career eventually promises to be.

“He’s climbing up the ladder right now,” Fields said. ““He’s kind of got an extra gene in competitiveness.”

“He could go top 20 in the world rankings,” Smith said. “He could be world-ranked, one, two or three. He’s got magnificent creativity around the greens. And the last six to eight months, you’re starting to see him feel it and trust his physical ability. I wouldn’t be surprised at all to see him up on the leaderboard this week.”

And for weeks to come.

Golden: Does 33-year-old Trey Hardee have one more Olympics in him? He sure hopes so