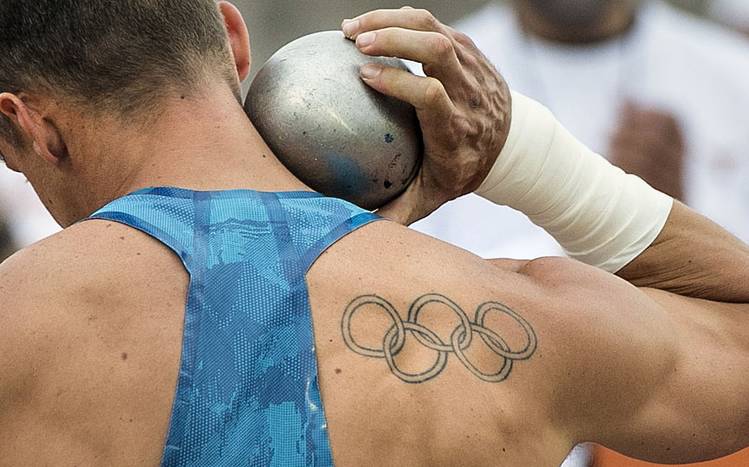 March 30, 2016 - Texas' Trey Hardee gets ready to throw in the shot put event of the decathlon during the 2016 Nike Clyde Littlefield Texas Relays held at Mike A. Myers Stadium in Austin, Texas, on Wednesday, March 30, 2016. RODOLFO GONZALEZ/AUSTIN AMERICAN-STATESMAN

Trey Hardee could retire right now and no one would blame him.

He’s won two world decathlon championships, a silver medal at the 2012 Olympics and has been blessed with a beautiful wife and daughter.

But the former Texas All-American isn’t finished even at the relatively advanced track-and-field age of 33. Retirement will come one day, but as Juba famously said at the end of “Gladiator,” “Not yet … not yet.”

So what keeps Hardee going?

“To boil it way, way down, I still love what I do,” Hardee said. “I love the sport of track and field. I love every aspect of what the decathlon brings to my life. The struggle of trying to achieve perfection by pushing the body to its limits … everything that was my trepidation when I first started doing it is what keeps me going now. It’s a daunting task.”

Hardee has come back from Tommy John surgery in 2011, the most ill-timed hamstring injury of his career in 2015 and countless other injuries that are bound to occur to someone in his profession.

He’s competing at the USTAF outdoor championships in Sacramento this week and if things go well, he’ll come out of it injury-free with an eye toward the Worlds later this summer in London. At this point, Hardee isn’t looking too far ahead though he would love to walk away from the sport after stepping off the medal stand at the 2020 Summer Games in Tokyo.

Talking to Hardee about his specialty is like peering under the hood of a Bugatti with the world’s best mechanic. Maximus and Juba would agree that the decathlon is the most gladiatorial of the Olympic track events, a two-day test of endurance as well as will. It ends with the brutal 1,500-meter run, an event often illustrated by the bodies strewn along the track at its conclusion.

There’s something about the 1,500 that still brings out the emotion in Hardee. Perhaps it’s because it represents the end of arguably the toughest gauntlet in his sport. As is the custom with the other events, the medalists take a victory lap draped in their country’s flag. When Ashton Eaton crossed the finish line in fourth place to cap a record-setting gold-medal performance at the 2016 Rio Games, Hardee was genuinely happy for the man who had stood next to him on the medal stand in London four years earlier.

That happiness was tinged with emotional loss because Hardee was viewing the celebration from outside the lines. He was working as a color commentator for NBC after a hamstring injury at the 2016 Olympic Trials killed his chance to win a spot on a third U.S. Olympic team. The TV gig provided an opportunity to travel to the Games and remain close to the event that earned once him the title of “World’s Greatest Athlete.”

Hardee watched former Texas teammate Sanya Richards-Ross analyze the 400-meter final two days earlier and asked her about the emotions she was feeling after missing out on a fourth consecutive Olympics after a hamstring injury in the Trials. He knew he would be doing the same for the decathlon and wanted a look at her putt speed, so to speak.

“I was more emotionally prepared than she was because I had her to lean on,” he said. “An injury wasn’t supposed to happen that year. It was tough. It motivated me to come back a little smarter and tougher. I enjoyed my time behind the mic and the desk. It was a blessing that Ashton won so I could puff out my chest for my fellow American, but it was tough to not be out there competing with him and the other guys.”

Eaton, whom Hardee calls the G.O.A.T. (Greatest Of All Time), announced his retirement in January at the age of 29, closing out a career that includes two Olympic golds, two world championships and world records in both the decathlon and indoor heptathlon.

Meanwhile, Hardee, who has a six-month-old daughter with wife Chelsea, is a retired champion pole vaulter that continues to compete.

Hardee still remembers growing up in Birmingham, Ala. with dreams of being an NBA star. He developed as a solid pole vaulter at Mississippi State before coaches there urged him to try the decathlon to take advantage of his 6-5 frame. Hardee wasn’t sold on the idea at first but eventually came around. One year after transferring to Texas, he won the decathlon at the 2005 NCAA outdoor championships.

Twelve years later, he relishes another chance to climb atop the sport. Hardee, just like the rest of us, can’t wait to fans to find out just how much gas he has left in the tank.

“I will do it until it doesn’t feel right,” he said. “I know there’s enough gas in my heart to want to do it.”

Bohls: Finally, Skip Johnson gets his chance to shine as a head coach (at Oklahoma)