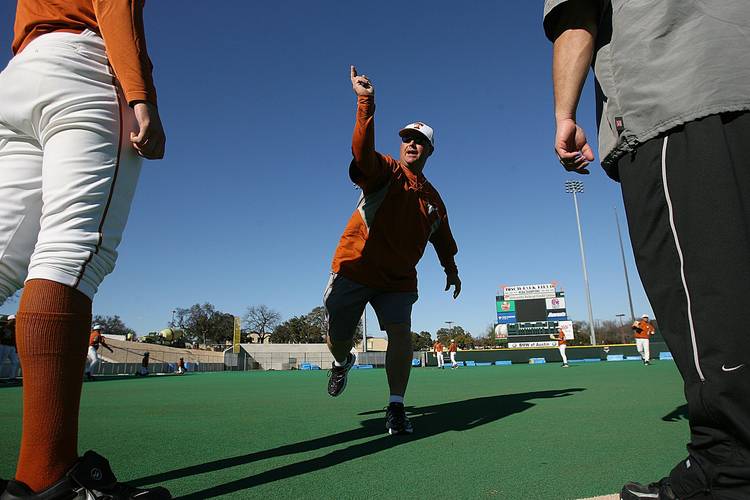 So what took him so long?

Until Monday, when he was named the 10th head baseball coach in Oklahoma history, Johnson was a career assistant despite a highly successful run as a junior-college coach.

To be honest, he was held back by school administrators who didn’t see enough glitz or, in their minds, gravitas in the low-key, veteran coach even though he won 450 games at Navarro College in Corsicana and took the Bulldogs to 13 regional tournaments.

He also worked as Augie Garrido’s pitching coach for 10 years at Texas, which followed the accepted practice of rarely promoting an assistant and especially when a school just fired the head coach. And he hasn’t climbed the ladder in part because Johnson may be the most ego-less, selfless coach this reporter has ever come across. Skip would rather intentionally walk a batter with the bases loaded than self-promote.

He’s as solid a coach as he is loyal and committed. Garrido’s not sure why Skip didn’t succeed him.

“Advisors don’t make decisions,” Garrido said of Johnson’s role. “But Skip’s been around champions most of his life. He knows what it takes to get to Omaha and win there. He’s highly competitive and very in touch with his players. He brings down-home wisdom and has a chance to create his own legacy.”

Here’s betting he creates a rich one and returns the Sooners to national prominence as they once were under the legendary Enos Semore.

“I don’t know why they didn’t hire me,” Johnson said of Texas. “I don’t have any animosity. I moved on. But schools don’t hire a lot of assistants.”

Well, they do in Norman. One week after athletic director Joe Castiglione promoted 33-year-old offensive coordinator Lincoln Riley to succeed Bob Stoops, he did the same with Johnson after pushing out Pete Hughes.

Of course, Castiglione was working off strong endorsements of Johnson from luminaries like Garrido, DeLoss Dodds, Roger Clemens and Texas Tech rival Tim Tadlock, who just happened to play on the same Little League team in Denton as Johnson and has been his best friend ever since.

“What you see is what you get with Skip,” Tadlock said. “It’s neat to see that Joe Castiglione recognized almost 30 years of commitment to the game of college baseball. Skip is baseball all day, every day. Our league just got better.”

Besides a wealth of knowledge about pitching, Johnson knows what builds success, and that’s deeply personal relationships. He cares about his players. Which is why Sooners pitcher Dylan Grove phoned him recently, wanting to share that he had zero walks in his latest start in the Cape Cod league. It made Johnson’s day.

That was typical of the wild, celebratory reaction of the team that reached this year’s NCAA regionals and gave No. 7 national seed Louisville all it wanted in a winners’ bracket game before getting eliminated. The players are on board.

And then he went all-philosophical, not unlike Augie.

“Hey, Pharaoh had a good time as king of Egypt,” Johnson said. “But Moses had the testimonies.”

And which are you?

And has been since his older brother, Tony, pointed to their mother’s tummy and said, “That’s Skipper.”

I like Arthur “Skip” Johnson. A lot. And I completely respect this 50-year-old baseball lifer because he coached 32 Longhorns pitchers who were drafted, and not once did he ever puff out his chest and brag about that or working as a personal pitching tutor for the likes of three-time Cy Young Award winner Clayton Kershaw and Homer Bailey.

Sure, Texas couldn’t hit a lick the last few seasons under Garrido, who invented baseball, and that cost both of them their jobs. But it didn’t hit much better this season under David Pierce either. Both Pierce and Johnson are hard-working grinders. Johnson, you should know, once spent 27 straight nights on the road recruiting and logged 370,000 miles on a green GMC pickup he was so attached to that he gave it to one of his two sons.

Garrido trumpeted Johnson’s core values and leadership abilities, but will Johnson hire Augie as an assistant?

“But,” he added, “that doesn’t mean I wouldn’t bring him in to talk to the team any day of the week.”

That’s unlikely, Garrido said, even though the two talk weekly and Garrido recommended a brand of wine that Skip gave Castiglione as a thank-you gift.

“I can root for Skip on a personal basis,” Augie said, “but I don’t think I can walk into that red stuff. I don’t think they’d embrace me much.”

But OU will embrace its new skipper. The Sooners have a much skimpier tradition than the Longhorns with only 10 College World Series appearances and two national titles, but it’s a proud program. And Johnson will welcome back solid pitchers like Grove and Jake Irvin as well as hot-hitting center fielder Steele Walker.

“We could beat anybody in the country this year, but we had an ERA of about 9.00 after we’d make an error,” Johnson said. “You just try to put the momentum in your dugout.”

That’d be the same OU dugout with a top-notch head coach, even one that’s had to wait a while to prove it.

Golden: Does 33-year-old Trey Hardee have one more Olympics in him? He sure hopes so