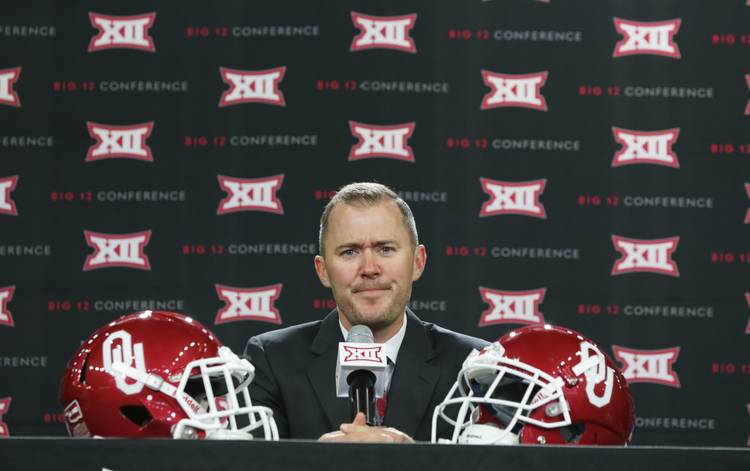 Add in that part about replacing a legend at a traditional college football power and the temperature goes up a few thousand degrees.

Bob Stoops was to white Oklahoma visors what Archie Griffin was to Heisman trophies: It’s hard to think of one without the other. That said, Stoops is no longer field boss in Norman, having shocked the college world earlier summer with his unexpected retirement from a program he’d returned to national relevance.

This year’s Big 12 media days have moved to the Ford Center and for the first time in 18 years, the most familiar face in the modern era of Oklahoma football was not part of the proceedings. Stoops is gone but his contributions to Sooners football, the Big 12 and the college game are nowhere near close to being forgotten.

The inside cover of this year’s Oklahoma media guide is a numerical tribute to Stoops, who carved out a wing in the annals of OU lore with 190 wins, 10 conference championships, 18 consecutive bowl trips, a pair of Heisman Trophy winners, five national title game appearances and a national title in 2000.

Sitting opposite that page is a message from Riley to Sooner Nation. “I’m not here to usher in a new era of OU success,” it reads. “This is already a championship-level program.”

Riley, 33, is embracing this pressure which is probably part of the reason he got the job.

“The expectations are there to win, like they always are at Oklahoma,” Riley said. “But that’s something that I enjoy and something that our staff enjoys, our players. That’s why you come to play and coach at Oklahoma is to win and to win big. It’s always been like that.”

Riley, who’s just 11 years older than starting quarterback Baker Mayfield., is one decade removed from the season when wideout Michael Crabtree hauled in 22 touchdowns as his understudy at Texas Tech. Now a head coach, he’s getting daily reminders of how life in the big office is different from his days as an assistant.

I asked Texas Tech coach Kliff Kingsbury if he would be giving Riley any advice entering his rookie season as a head coach — reason being that Kliff was hired at Texas Tech at the identical age of 33.

“Yeah, I have not given him any (advice) because we play them,” Kingsbury said. “But if I did, it would probably (be to) just don’t try to get it all done in one day. It can seem overwhelming, particularly when you’re trying to have so much input in the offense and coaching quarterbacks.”

Lucky for Riley that he’s entering a situation where he didn’t have go through the tedious process of putting together a staff, a daunting task for any young coach. The Sooners have a veteran staff. Better yet, he won’t have to hire a play caller since that’s his specialty. The Sooners will be without offensive stars Samaje Perine, Joe Mixon and Dede Westbrook but return a veteran offensive line and Mayfield, a Heisman finalist last year.

Stoops told both Riley and Mayfield that he was leaving before he addressed the team, his way of handing the baton to the two most important people in the program this fall, an All-American quarterback and a talented assistant who’s never been a head coach at any level.

“They have a way of getting the best out of their players,” Mayfield said of Stoops and Riley. “Coach Riley brings in that young energy I think we needed, so I think it’s going to be a great transition.”

While Stoops has stepped away from the game — I don’t remember him saying he retired — Riley said he won’t hesitate to bounce ideas off his mentor while also taking the sage advice of coaching legend Barry Switzer, who reminds him often to be himself and not try to emulate others.

Stoops made his bones by dominating the Big 12. He and Sooners athletic director Joe Castiglione are placing a lot of faith in an unproven head coach, but their judgment has been spot-on in most instances over the last couple of decades.

While temperatures ranged in the early-to-mid 90s in Norman on Monday, the pressure cooker will be much hotter come the fall.

Bohls: Finally, Skip Johnson gets his chance to shine as a head coach (at Oklahoma)

Bohls: If his defense continues to leak, Kliff Kingsbury figures to sink at Texas Tech