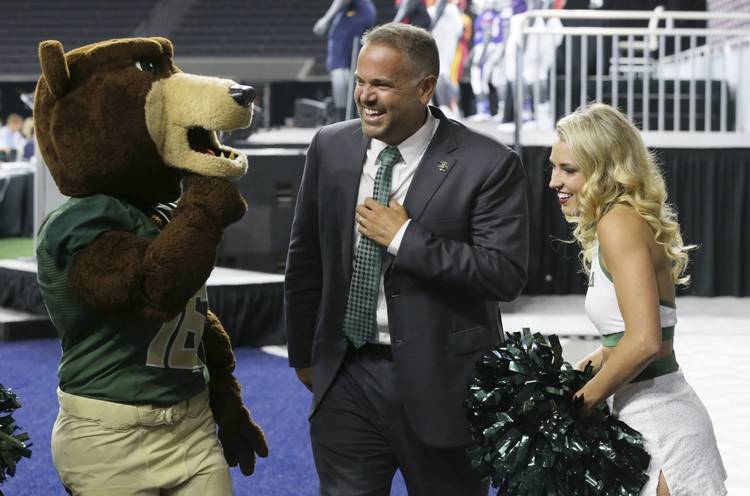 FRISCO — Matt Rhule has a job ahead of him in Waco.

He will handle it.

Rhule will win at Baylor because he’s a good football coach. Recruits will find their way back to Waco as time helps to heal the wounds of the past.

As the Bears prepare for the 2017 football season, Rhule and the campus’ new leaders are battling against perception. The missteps and the scandal that ended the coaching run of Art Briles are in the too-recent past, but the work that remains is much more important than scoring a touchdown, winning a bowl game or boosting the athletic department’s bottom line. Rhule and new Baylor AD Mack Rhoades represent a fresh start for a program that’s in dire need of a turnaround off the field.

“It’s important that they hear that I’m proud to be here at Baylor,” Rhule said Tuesday at Big 12 media days. “I say that all the time. Everyone has followed what has happened, but at the end of the day you will be judged on how we responded to it and not just on what happened. You can’t minimize it, but you can affect how you handle it and what you do moving forward.”

It’s a clear challenge. Public opinion can crush folks, even someone who wasn’t in Waco when horrific things were happening on Baylor’s campus.

This is what makes Rhule such an interesting study. He could have chosen not to speak about the hit the university’s reputation took as a result of the sexual-assault scandal that occurred under Briles. He could have played the I’m-not-here-to-talk-about-the-past card. Shoot, he could have just avoided Waco altogether and remained at Temple, where he was 20-7 over the past two seasons while winning a conference championship and playing in a pair of bowl games.

In the end, he made what he called one of his toughest decisions and left a place he had come to love.

His arrival has been a win for Baylor, its players, its fans and the Big 12, which also took a hit as the scandal sadly played out in Waco.

Now, the school’s president, Linda Livingstone, and its Title IX coordinator, Kristan Tucker, have enacted a curriculum designed to increase awareness of sexual violence on campus in the hope that past mistakes won’t be repeated. Rhule and Rhoades are actively involved in this undertaking, from encouraging players to volunteer at places like Mission Waco — an organization that benefits the city’s underprivileged — to partnering with such organizations as the Clery Center, which tackles the issue of safety on college campuses.

Rhule said if he were still at Temple, he would be following the same plan: inform and educate the young man first and the player will follow.

“It’s his ministry,” Rhoades told me. “We do a great job of developing young people at Baylor. I get that we have to win games and that’s important, but no more important than making sure we prepare our kids for life after Baylor and this culture of making sure they understand that everything does count and everything does matter, not just on the football field.”

While he will have the rest of the summer to figure out the football issues — including whether graduate transfer Anu Solomon is the answer at quarterback behind an offensive line that lost center Kyle Fuller to graduation and his backup, Sean Muir, to concussions troubles or how new defensive coordinator Phil Snow can get some stops in the pass-happy Big 12 — Rhule is off to a great start in winning over the fan base and his players.

“He’s one of us,” said senior defensive end Brian Nance, who will graduate after being suspended for the 2015 season because of academic struggles. “He’s a great leader.”

I spoke with Baylor alumni Maurice Sanders and his wife, Crystal, who drove over from Denton for a Monday night banquet where Rhule and Rhoads served as keynote speakers. They came away feeling great about the steps Rhule is taking on and off the field to get the football team back to the some of the important tenets the university was built to represent. Faith. Service. Leadership.

“It’s not what he says but how he carries himself,” Crystal said. “I love his vision.”

“His sincerity will translate to his coaches and his players,” Maurice added. “He isn’t out there telling his players they will be superstars automatically. He’s telling them they will have to work for it.”

Rhule rolled up his sleeves months ago. Now he’s ready to win games and get people smiling about Baylor football again.

“We’re building a culture, not an attitude,” he said.

Bohls: Harbaugh 2.0? That might be accurate label for Texas’ Tom Herman